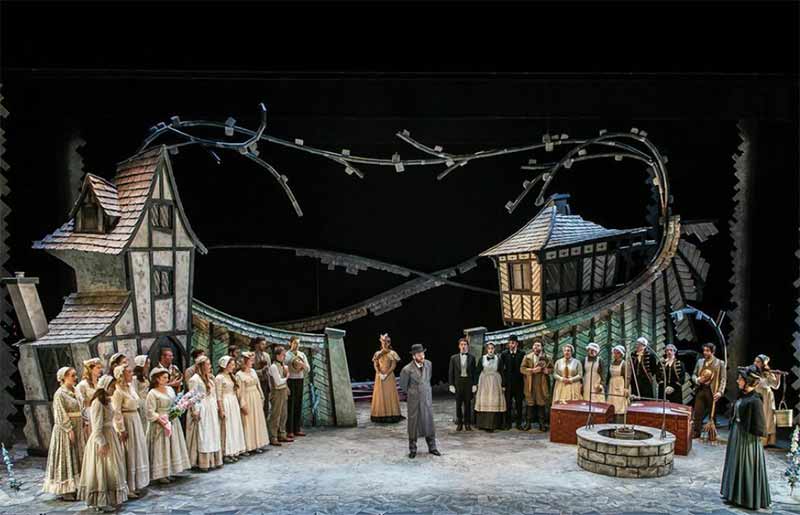 Thank heavens for Guildhall School Opera! Anyone searching for opera in London on this night might have felt weighed down by such meaty matters as the Mariinsky Theatre’s Boris Godunov (Barbican), or Mozart’s Idomeneo opening at Covent Garden, or not up to the weepy on offer from ENO (La bohème). Yet something more cheerful was at hand in Stephen Medcalf’s beautifully set production of Dvořák’s The Cunning Peasant.

Very much a rarity (information about previous British performances is scant, even the programme doesn’t mention a Guildhall School production in 1997, directed by Robert Chevara, that I’ve found reference to on-line), and surely the obvious conflation in the plot of The Bartered Bride and The Marriage of Figaro can’t be the reason that this vivacious and thoroughly enjoyable piece has been consigned to the operatic bottom drawer. Medcalf relocates the story to Thomas Hardy’s fictional Wessex, and the first thing we see during the Overture is an eviction, with peasants’ belongings carted away, leaving a vacant property. 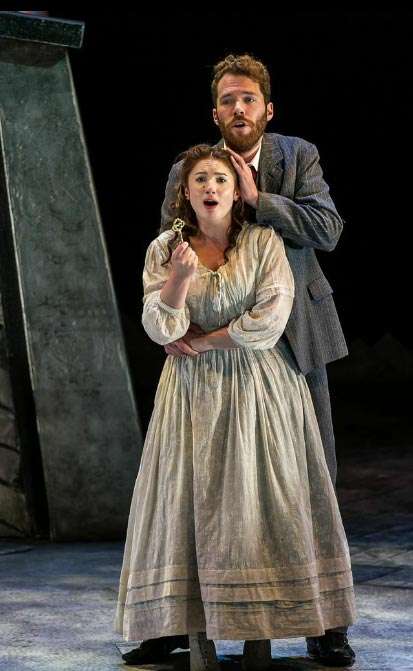 What perhaps is less Hardy-esque is the appearance of the Duke and Duchess (Dvořák originally had Prince and Princess) to oversee the May Day festivities, but this Downton Abbey-like imposition stuck out less than making the unsuccessful suitor to our heroine Bathsheba (Bétuška in Dvořák’s original) Jewish, unveiling his skull cap every time he doffed his hat. There is no suggestion that the original Václav was Jewish, he’s just a “dull, rich man’s son’” who Bathsheba’s father (here Gabriel, originally Martin) may well have favoured for his daughter. That’s not to say Robin Bailey isn’t excellent as Reuben; indeed he’s rather affecting as the self-deluded soul (even in defeat he hopes for better next time!). A minor query – and one that thankfully doesn’t detract.

Francis O’Connor’s idyllic set, with its crooked, tiled two-storey cottages separated by a wall and a gate and curved tree branches above, is pure delight and could grace any operatic stage. During the interval each house is rotated with the effect that the audience finds itself sitting on the opposite side of the wall for the second Act. That affords plenty of space for some spectacular maypole dancing, not only by the chorus (perfectly weaving the beribboned patterns as they dance around the pole) but also four dancers from the Central School of Ballet – and all to Dvořák’s seamless stream of dance melodies.

Only three of the roles in this production are double cast: Bathsheba, Victoria (the titular cunning peasant, originally Veruna) and the Duke, although on opening night the role of John – whose collapse into a water barrel might also suggest similarities to Falstaff, save for the fact that the Verdi dates from some seventeen years after the Dvořák – was sung by John Findon, replacing an indisposed Samuel Smith. On opening night all three of these roles were extremely well taken: Alison Rose’s bright soprano giving Bathsheba a feisty edge, as she hangs on amidst all the shenanigans for her happy-go-lucky Joseph (Lawrence Thackeray); Ailsa Mainwaring’s Victoria combined nosiness and subterfuge in equal measure; and Rick Zwart brought a touch of humanity if not humility to the role of the Duke, although Medcalf indicates that he has not learnt his lesson at the end of the show.

There is good support from David Shipley’s Gabriel, who eventually acquiesces to his daughter’s wishes (and the Duke’s command). Victoria’s plan is that three ladies are dressed as Bathsheba on one night. While both the Duke and his valet John find the Bathshebas they think they are wooing are in fact their own Duchess and Fanny all along, Bathsheba gets her Joseph after all, and the Duke gives them the keys to the empty cottage (although keeping a key for himself…).

Medcalf’s detailed and clear direction makes this an effortless evening in the opera house. Clive Timms’s translation, which is put over with almost universal good diction by the cast, is a delight in its own right, and – although unseen – the contribution from the pit rises to the occasion magnificently under Dominic Wheeler.

Genial and undemanding it might be, but with Dvořák in melodic overdrive, this production banishes the cold dark winter nights and should be available on prescription for anyone suffering from seasonal affective disorder.