Wolf-Ferrari
Le donne curiose – Opera in three Acts to a libretto by Luigi Sugana after Carlo Goldoni [sung in Italian, Venetian and Gondolese with English surtitles]

Chorus of Venetians and Tourists 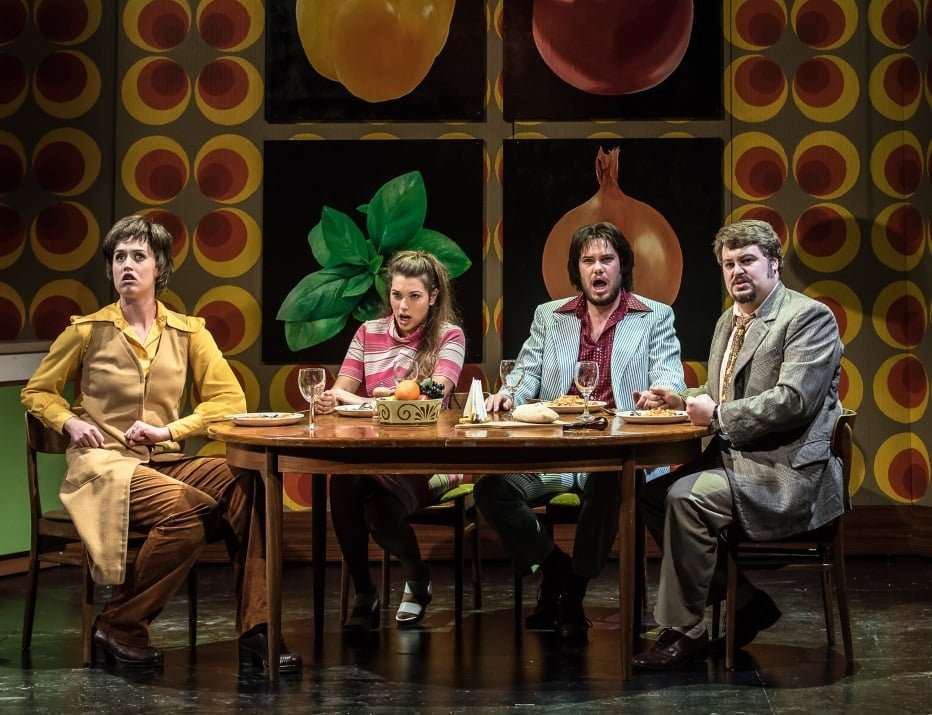 Light and slight it may be, but Guildhall School’s brilliantly conceived production of his 1903 Le donne curiose may also be its UK première (I can find no clear evidence either way). Typically – given the composer’s German and Italian parentage – it exists in two languages, and was originally premièred in Munich on 27 November 1903 under the title Die neugierigen Frauen (the version recently released on CPO, conducted by Ulf Schirmer). In Wolf-Ferrari’s other language, Italian, it received its première at the hands of Toscanini, no less, in New York on 3 January 1912, with Milan following soon after, under Serafin, on 16 January 1913. With these Guildhall performances on the cusp of winter, it seems it is an opera that aims to brighten the darkening nights with lyricism and laughter. And it succeeds effortlessly.

Stephen Barlow has updated the action to the 1970s: whether Italians fell hook, line and sinker for psychedelic wallpaper, flares, kipper ties and overdesigned gadgets like Britain did, I don’t know, but Barlow and his imaginative designer Yannis Thavoris obviously hope so. Thavoris also outdoes Richard Jones in his flamboyant use of garish wallpaper designs, and I wasn’t the only one who claimed they used to have walls plastered in exact such designs – ah, was it forty years ago?! The design fun was matched by the wonderful framing device used for the production – three episodes in a soap opera on Italian television, produced by Canale, whose logo had more-than-a passing resemblance to the old Thames Television – here with the Venice cityscape rising out of, and then being reflected in the lagoon. Pauses to cover scene changes also utilised the RAI equivalent of the test card (although, given it was in monochrome I suspect that was from earlier even than the 1970s). The Overture includes a Dallas-like opening credit sequence with each of the main characters beaming out from the screen (courtesy of video designer Dom Baker). 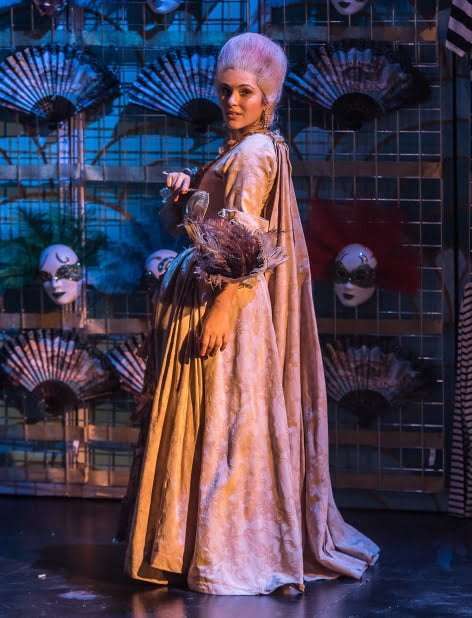 The comedy is as carefully detailed as all these design elements and the large cast relishes the lyrical vocal lines and frothy plot that could equally easily have been set around the Garrick Club in London, as the whole point of the plot is that wives and girlfriends want to find out what their men-folk are doing at such a association, from which women are barred. We follow the four ‘curious women’ of the title – Beatrice, her daughter Rosauro and her maid Colombina, and Eleonora as they try to get the key to the venue and sneak their way in. As it happens, door-keeper Pantalone manages to foil the plot, but eventually the ladies force Pantalone’s servant, Arlecchino, to let them in. And then their suspicions are punctured, as it’s only a dining club with nothing untoward going on. Even though they are then discovered, the opera ends on a convivial note of the unity of the sexes.

It’s an age-old tale – men against women, as told from Aristophanes (Lysistrata) through Shakespeare (The Merry Wives of Windsor) to sit-com today – and is particularly delightfully told by Wolf-Ferrari, with orchestral wit indebted to Mozart, Strauss and Verdi. There are some particularly nice ensembles – a quartet for the girls, a trio for the boys – and Mark Shanahan keeps everything buoyant and moving.

It’s all amusing and enjoyable; and an all-round feel-good evening. Much hard work has gone into putting on this comedy, including the occasional traipsing through of tourists, whether buying souvenirs (the entrance to the club is in Pantalone’s gift shop), getting lost and exiting through the auditorium or being serenaded by gondoliers, who sing in their own language. Two of the three throwbacks to commedia dell’arte – Pantalone and Arlecchino (in his harlequin, diamond-shaped design shirt) – also sing in Venetian dialect.

Amongst a strong cast, Florindo was ardently taken by Thomas Atkins, matched endearingly by his sighed-for Rosauro – a lively Nicola Said. Katarzyna Balejko, topped by a 70s perm, was a no-nonsense meddler as Colombina, looking good in moustache and Italia track-suit as she imitated a man to get in to the club clandestinely. Christopher Cull’s quick-to-anger Lelio, forever taking his belt off to teach his wife a thing or two, was finely matched by Jennifer Witton as his spouse, Eleonora, in the bedroom scene where she gets his keys.