The theme of this concert by members of the Guildhall School of Music and Drama was ‘love and death’ with “Cavalleria rusticana” by Pietro Mascagni (1863-1945) especially apt as it is set at Eastertide. Although he wrote over a dozen operas Mascagni is remembered only for his first, the one-act ‘Cav’. Originally submitted by the composer’s wife to an opera competition (Mascagni had his doubts about its validity), it won first prize and was performed in Rome in 1890. It has remained in the repertoire of opera companies all over the world and, although Mascagni never achieved the same success with any of his subsequent works, his first is a paradigm of what a one-act opera should be: a simple but effective and engrossing plot, with a handful of interesting and well-defined characters and set to the most luscious of music. The opera is generally paired with Ruggero Leoncavallo’s “I pagliacci”.

This concert performance was particularly impressive, not least because it fielded over a hundred Guildhall School choristers, something that a theatre couldn’t afford. Therefore, because Mascagni uses the chorus as an integral part of the story – having the female villagers first singing about the spring flowers, then letting the men sing of taking time off from work to celebrate love, while later the church congregation perform the ‘Easter Hymn’. With all these voices the sound is simply sublime. Mascagni’s music lends itself well to huge forces, as he writes big, bold themes that sweep the drama along. Set in a Sicilian village, the story is one of love betrayed. Village girl Santuzza was in love with Turiddu, although he swore undying love to Lola before going off to the army. On his return he found Lola had married Alfio and he began an affair with Santuzza. The jealous Lola took Turiddu back and when Santuzza reveals this to Turiddu’a mother, Lucia, she is horrified and tries to reason with her son. This ménage of jealousy and betrayal leads to a duel and an ultimately tragic death. 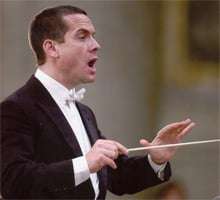 Paolo Olmi gathered his forces together to produce a strong sound which in the relatively confined space of the Barbican Hall was impressive indeed. The guest-singers coped well with the over-emphatic dramatics of the plot. Mirella Golinelli as Santuzza brought great feeling to the part of the wronged village girl and in her semi-‘mad’ scene she was quite chilling. As Turiddu Marco De Carolis (in his London debut) impressed with his vocal urgency. He started offstage in the Sicilian ballad in praise of Lola with a beautiful ringing tone. Good work too from three Guildhall School alumna, Sara González as Lucia, Marc Scoffoni as Alfio and Rowan Hellier as Lola. Praise too goes to Linnhe Robertson, chorus master of the Guildhall Chorus, who has shaped the singers into a fantastically good choir with a rich, incisive and mellifluous sound. Mascagni’s opera is in one-act of two halves. Apart from the ‘Easter Hymn’, one of the all-time Family Favourites, the two halves are linked by the famous ‘Intermezzo’, the lush melody that will forever be one of radio’s ‘100 Best Tunes’.

In the first part of the concert, Elizabeth Connell gave a splendidly soaring account of the ‘Liebestod’. Paolo Olmi conducted the concert version of the opening and closing of “Tristan und Isolde”, serving these sweepingly passionate themes with true grace. The Tchaikovsky also received a fine performance, with gentle, sympathetic playing from the strings, some notable bassoon work and fine brass playing that was spot-on, piercing through the love theme, and running the gamut of emotions but without resorting to sickly sweet or soupy sentimentalism.