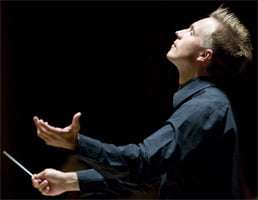 The Guildhall Symphony Orchestra’s appearances in the Barbican Hall are a welcome fixture: necessary, too, for these potential orchestral players of the future to gain experience in a major concert venue.

The same applies, of course, to composers – and it was gratifying that Vasily Petrenko opened the evening with a piece by a Guildhall postgraduate. Now in his mid-twenties, Edmund Finnis has recently worked in dance and electro-acoustics though lacks nothing in terms of an orchestral sense. Over the course of its 8 minutes, Flicker (2008) touches on a variety of pithy yet distinctive motifs, given coherence by a secure formal grasp (both the culmination and conclusion of the piece were unobtrusively evident) and definition through the skilful deployment of timbre and texture. Lucidly rendered by the GSO, it gave notice of a creative talent of whom one looks forward to hearing more.

The remainder of the programme was occupied by Russian music of the Soviet era. Shostakovich’s First Piano Concerto (1933) confirms that while its composer may have turned away from a career as a pianist, his technical prowess (at least during his earlier years) was undoubted. As is that of Martyna Jatkauskaite, though it was a pity that her command of the keyboard admitted of so little response to the not always subtle ironies of this piece. Those in the first movement were largely skated over, while the Lento’s marked alternation between wistfulness and vehemence was undersold by Jatkauskaite’s unvaried consistency. The brief Moderato was convincingly shaped, and though the high-jinks of the finale were hardly of the most effervescent, a degree of interplay with the strings – lacking hitherto – suggested Jatkauskaite may yet have the measure of this deceptively lightweight work. In this sense, Philip Cobb seemed much more at ease in the obbligato trumpet part – acquitting himself with a style and panache that ought to earn him a deserved number of future engagements.

Now in his third season as Principal Conductor of the Royal Liverpool Philharmonic, Petrenko is very much a musician ‘on the up’. He has recently started recording a Shostakovich symphony cycle for Naxos, and his performance of Prokofiev’s Fifth Symphony (1944) evinced no mean identity with the latter composer. Never easy to pace, the opening Andante built gradually yet inevitability from its diverse melodic elements, through a development of simmering intensity and a reprise whose resolution was held in check, to a coda that powerfully reinforced the movement’s emotional ambiguity. The scherzo was vividly characterised and if Petrenko made too little of the expressive distinction with the trio, the accelerando back to the scherzo was ideally rendered – as was the “skirting disaster” of the close.

If the performance came at all unstuck, it was in an Adagio that was simply too long-breathed for the Guildhall players to sustain. In particular, the anxiety of the central section risked unspooling on the way to a forceful but unfocussed climax, with the fateful tread of those either side not so much deliberate as stolid and leaving too little breathing space for the coda to work its ethereal magic. Rightly following attacca (Petrenko clearly sees this as a symphony of two complementary pairs), the finale was largely successful – some tentativeness in the contrapuntal exchanges of the central episode hardly detracting from the overall impetus, leading to a coda which saw the work home with a surge of energy at once uninhibited yet equivocal. Certainly those less than responsive to the ‘bear fight’ Gergiev makes of it will have found much to enjoy in this flawed but engrossing performance.