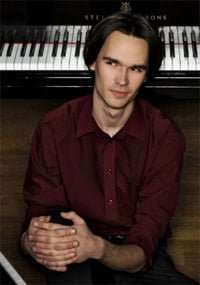 Every year the Guildhall Wigmore Recital Prize is awarded to “an exceptional Guildhall School musician”. 25-year-old Estonian pianist Mihkel Poll took the honours this time and delivered an ambitious and enticing programme. Poll is currently a postgraduate at Guildhall School studying with Ronan O’Hora.

Poll deserves top honours for choosing works that are not necessarily box-office favourites. If the programme was not for the faint-hearted, it proved a stimulating and rewarding mix, which Poll brought off with unstinting focus and commitment. He has these works in his psyche and at his fingertips, all safely memorised. Indeed he was singularly impressive and over the course of two hours ensured that he is a musician now to follow.

George Enescu (1881-1955) planned three piano sonatas but annotated only two; the second of them was complete in his head but died with him. The first of the three sonatas (1924) once again shows Enescu’s remarkable imagination and facility, a capacity to work within ‘tradition’ while being entirely original. The dark, sinewy and impressionistic opening measures not only established Enescu’s inventiveness but also Poll’s concern for sound and balance – he is blessed with a wide range of dynamics, colour and touch – alive to the music’s unpredictable shifts and its eloquence. The toccata-like propulsion of the scherzo – whimsy at speed – left no doubt as to Poll’s technical abilities, matching such considerable demands but never flashy and with consistently good tone in fortissimos. He made the slow, illustrative finale spellbinding before resolving it to peacefulness. 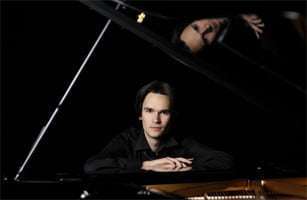 In a programme in which connections were made (sometimes during the Enescu one thought of the slower numbers of Ravel’s Miroirs), there was glances-back from Ligeti to Bartók and the latter’s music is sometimes prophetic of the later composer. The two György Ligeti Etudes were given accomplished renditions by Poll. They test not only keyboard skills but interpretative imagination. Poll was on top of both, delivering the ambiguities of ‘Rainbow’ (1985) with poise, taking it up and beyond the instrument’s compass, and rendered the scintillating ‘The devil’s staircase’ (1993) with controlled fury to its spiralling and engaging with its fraught coda via an apocalyptic climax (Ligeti’s markings include an impossible ffffffff – but it’s clear what he wanted!). The Bartók (1926) was vividly characterised. Poll could have pounded more and played faster – but the music doesn’t need such showmanship, it requires musicianship. Poll has this in spades, not least in ‘The night’s music’, which was utterly hypnotic in its shading and sensitivity. It anticipates aspects of Bartók’s Piano Concerto No.2 – Poll seems particularly well-equipped to tackle its Herculean challenges.

After the interval, Poll made a serious misjudgement by playing only the first section of Gaspard de la nuit. The pity was that he brought to it such clarity and atmosphere that I had settled into a complete performance – thus the applause that greeted it was shockingly rude! Fortunately Poll has recorded the complete work (Ondine ODE 1161-2), a very recommendable performance of this masterpiece that also includes Alexander Mosolov’s Two Nocturnes (1925/26), something of a misnomer given the pieces’ agitation and dissonance, and anguished climaxes – but then nightmares tend to occur in the small hours!

Potentially Poll’s toughest test was the Prokofiev (1940), the first of the composer’s trilogy of so-called ‘War Sonatas’. Poll doesn’t quite have the work within his gift yet. The first movement needed a more-measured tempo, its ideas to be marked out in greater relief, angrier and with greater vehemence, and a couple of passages found his fingers a little compromised. Similarly the finale was too helter-skelter. Poll was more convincing in the middle-movements’ respective gawky capriciousness (a mechanistic ballet) and bittersweet lyricism. (My yardstick to a truly penetrating performance of this significant work is Ivo Pogorelich on DG.)

For encores, Poll offered Rachmaninov, a Prelude (the G major, Opus 32/5, I believe) that was disarming in its elasticity and which rippled with intensity, and an Etude-tableau (from the Opus 39 set) that was suitably demonic without being flashy or developing coarseness. Poll is already a very complete artist: a credit to himself and to the Guildhall School. He seems on the cusp of a notable career.