Guys and Dolls
A Musical Fable of Broadway, based on a story and characters of Damon Runyon, with music and lyrics by Frank Loesser to a book by Jo Swerling & Abe Burrows 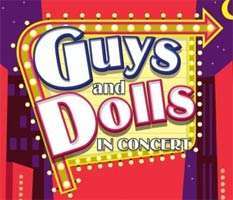 Why bother? After all, Frank Loesser’s 60-year-old comedy of New York lowlife is hardly a neglected musical. In addition to Michael Grandage’s West End revival – which closed only five years ago – and to Richard Eyre’s long-lived National Theatre version, which ran sporadically from 1982 to 1997, regional and amateur productions of Guys and Dolls are a dime a dozen. Yet other Loesser (though not necessarily lesser) shows like Where’s Charley?, and How To Succeed In Business Without Really Trying, scarcely ever see the light of day on this side of the Atlantic. An opportunity has been missed.

With such a familiar show any concert version needs to have something special to it, but only occasionally does this offering rise above the indifferent. It’s essentially a pro-am exercise (though it is neither advertised nor priced as such), with minor roles and choruses all sung by students of the Arts Educational School who, while lithe and talented, really do come across as the youngsters they are. For example, the uncredited actress who plays General Cartwright, intimidating regional boss of the Save-A-Soul Mission (not quite the Salvation Army, despite rear-stage projections that claim otherwise) appears improbably clad in a diaphanously youthful rah-rah outfit with plunging neckline. Concert version or not, suspension of disbelief is sorely challenged.

This is no orchestral extravaganza; the Royal Philharmonic Concert Orchestra fields a standard show band of nineteen players (with no details given as to arrangements). Richard Balcombe conducted with idiomatic pizzazz, but for some inexplicable reason the musicians were amplified, which meant that the singers also needed microphones in order to be heard over them. Even the chorus members sported head-mics. The Cadogan Hall acoustic was sorely tested by all this superfluous – and inauthentic – electronic clangour.

The principal performers appeared to have been parachuted in at late notice and may have anticipated that they’d be singing from music stands, since scripts were never far away from their eyes even though the platform was kept busy with stage business. Director Russell Labey has unfortunately jettisoned most of Jo Swerling and Abe Burrows’s marvellous book in order to concentrate on the musical numbers, so it should surely have been possible for a professional cast to learn what lines remain to them, but there were simply too many hesitations and hitches – not least from Graham Bickley, who otherwise presented a plausibly louche Nathan Detroit.

Anna-Jane Casey was feisty and a mite too sassy as the demure Sarah Brown (she would have been better cast as Miss Adelaide, Nathan’s long-suffering fiancée) while the velvet-voiced crooner Lance Ellington delivered Sky Masterson’s numbers as if they were part of his cabaret act. Labey is at fault for his lack of directorial intervention here – as he is, incidentally, for the gaffe of allowing a Salvationist to cross herself in prayer.

It was left to three consummate professionals to save the day: Dennis Waterman, who not only filled in the textual excisions with a discreet narration (anonymous) but also sang Abernathy’s ‘More I Cannot Wish You’ with unexpected tenderness; Gavin Spokes, a pinging young tenor who will probably make a good living out of rockin’ the boat as Nicely-Nicely Johnson, and the extraordinary Ruthie Henshall as Miss Adelaide, a role for which this diva of musical theatre is manifestly too glamorous but which she seized upon and delivered with individual brilliance. Henshall was every bit a match for Julia McKenzie and Imelda Staunton, to name but two of her predecessors in the role, and with her vocal radiance and rich comic palette she went a long way towards compensating for the numerous shortcomings of a dispiriting evening.