Skip to content
LnRiLWNvbnRhaW5lcltkYXRhLXRvb2xzZXQtYmxvY2tzLWNvbnRhaW5lcj0iNmIzNDMzNmNmZTc3NWZiNGJlMTVjMmIwMzU3NWM1MjYiXSB7IHBhZGRpbmc6IDI1cHg7Ym94LXNoYWRvdzogNXB4IDVweCAxMHB4IDAgcmdiYSggMCwgMCwgMCwgMC41ICk7Ym9yZGVyOiAycHggZG90dGVkIHJnYmEoIDEwOSwgMTA4LCAxMDgsIDEgKTsgfSAudGItZmllbGRbZGF0YS10b29sc2V0LWJsb2Nrcy1maWVsZD0iODM3Y2ExZjc0MGRjZDdkOTdlMzQzOWMyYjIwMWZmZTMiXSB7IGJhY2tncm91bmQtY29sb3I6IHJnYmEoIDIzOCwgMjM4LCAyMzgsIDEgKTtwYWRkaW5nLXRvcDogMTBweDtwYWRkaW5nLWJvdHRvbTogMTBweDtwYWRkaW5nLWxlZnQ6IDEwcHg7IH0g
LnRiLWNvbnRhaW5lcltkYXRhLXRvb2xzZXQtYmxvY2tzLWNvbnRhaW5lcj0iNmIzNDMzNmNmZTc3NWZiNGJlMTVjMmIwMzU3NWM1MjYiXSB7IHBhZGRpbmc6IDI1cHg7Ym94LXNoYWRvdzogNXB4IDVweCAxMHB4IDAgcmdiYSggMCwgMCwgMCwgMC41ICk7Ym9yZGVyOiAycHggZG90dGVkIHJnYmEoIDEwOSwgMTA4LCAxMDgsIDEgKTsgfSAudGItZmllbGRbZGF0YS10b29sc2V0LWJsb2Nrcy1maWVsZD0iODM3Y2ExZjc0MGRjZDdkOTdlMzQzOWMyYjIwMWZmZTMiXSB7IGJhY2tncm91bmQtY29sb3I6IHJnYmEoIDIzOCwgMjM4LCAyMzgsIDEgKTtwYWRkaW5nLXRvcDogMTBweDtwYWRkaW5nLWJvdHRvbTogMTBweDtwYWRkaW5nLWxlZnQ6IDEwcHg7IH0g
Guys and Dolls
Musical in two Acts, with music & lyrics by Frank Loesser, book by Jo Swerling & Abe Burrows, based on the short stories The Idyll of Miss Sarah Brown, Blood Pressure, and Pick the Winner by Damon Runyon
LnRiLWNvbnRhaW5lcltkYXRhLXRvb2xzZXQtYmxvY2tzLWNvbnRhaW5lcj0iNmIzNDMzNmNmZTc3NWZiNGJlMTVjMmIwMzU3NWM1MjYiXSB7IHBhZGRpbmc6IDI1cHg7Ym94LXNoYWRvdzogNXB4IDVweCAxMHB4IDAgcmdiYSggMCwgMCwgMCwgMC41ICk7Ym9yZGVyOiAycHggZG90dGVkIHJnYmEoIDEwOSwgMTA4LCAxMDgsIDEgKTsgfSAudGItZmllbGRbZGF0YS10b29sc2V0LWJsb2Nrcy1maWVsZD0iODM3Y2ExZjc0MGRjZDdkOTdlMzQzOWMyYjIwMWZmZTMiXSB7IGJhY2tncm91bmQtY29sb3I6IHJnYmEoIDIzOCwgMjM4LCAyMzgsIDEgKTtwYWRkaW5nLXRvcDogMTBweDtwYWRkaW5nLWJvdHRvbTogMTBweDtwYWRkaW5nLWxlZnQ6IDEwcHg7IH0g

The Royal Albert Hall staged three performances of Guys and Dolls (this was the second) with a starry cast that would be impossible to employ for an extended run. This venue is not the best place to stage any sort of theatrical performance although it has succeeded for many years in presenting operas, ballets and films in this vast space. For Guys and Dolls the players were placed on a wide stage in front of the orchestra and for the most part the production was a success, due mainly to careful lighting and sound design.

The original New York production of Guys and Dolls was an immediate success in 1950 and ran for some three years on Broadway. The first London production in 1953 ran for over a year but it took several decades for it to be revived in London. Laurence Olivier had wanted to play Nathan Detroit but by 1971 he was in bad health and the Old Vic National Theatre staging never materialised. However, Richard Eyre directed a revival at the National in 1982 (by then on the South Bank) and it was one of its most successful productions, running for four years, by touring nationwide, then returning to the National and subsequently transferring to the West End, and it was revive by Eyre in 1996.

Another revival opened at the Piccadilly Theatre in 2005, directed by Michael Grandage. There have been further revivals in the US and Australia and the show is never too far away in the UK, including a Welsh tour in 2010 and concert performances at London’s Cadogan Hall in 2012. Chichester Festival Theatre revived it in 2015 and came to the Savoy Theatre and then toured the UK and Dublin. The UK’s first all-black production opened in Manchester in 2017. And so it goes … It looks as if Frank Loesser’s show will be with us for as long as there is theatre.

This should come as no surprise to anyone, because the show has impeccable credentials – firstly a copper-bottomed hit of a core by Loesser who also wrote the lyrics in the manner of Damon Runyon, the source material for the book. The original production might have won the Pulitzer Prize for Drama, but the decision was vetoed because of Abe Burrows’s run-in with Joseph McCarthy’s House of Un-American Activities Committee. 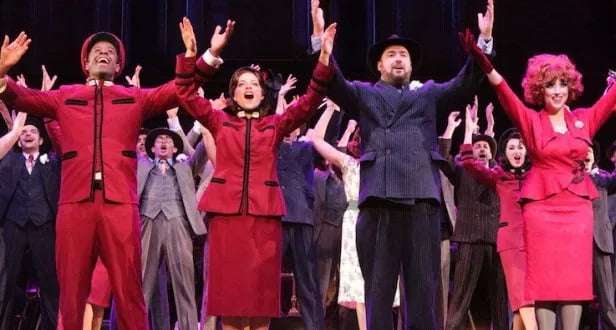 For the Albert Hall presentations the book has been somewhat telescoped, and a narrator (Stephen Mangan) supplies the essential details and introductions. The basis of Runyon’s plot is gambling and if it’s not the horses, it’s a crap game and if that’s not possible Nathan Detroit will bet on anything including how many strudels and cheesecakes his local deli might sell in a day. He runs the “Oldest established” floating crap game in New York, as the song has it, but he’s finding it difficult to get a venue for his illegal activities. Nathan tries to earn money by gambling against Sky Masterson, who will bet on anything. When Nathan suggests that Sky cannot take Sarah Brown of the Save-a-Soul Mission for dinner in Cuba, the bet is on. Sky promises to fill Sarah’s Mission hall with sinners if she accepts the date. Meanwhile, Miss Adelaide, Nathan’s girlfriend is forever trying to get her recalcitrant beau to the altar, but as Nathan is too busy gambling, he’s flunked getting to the church fourteen times.

The book intertwines these separate plots very deftly to provide a seamless pantomime of comic and romantic possibilities and for a couple of hours the Kensington venue becomes a New York underworld. As Sky Adrian Lester brings musical authority to numbers such as ‘My time of day’, ‘I’ve never been in love before’, ‘Luck be a lady’ and ‘I’ll know’. Jason Manford is hilarious as poor put-upon Nathan and is excellent in the explanatory title song and his duet with Adelaide in ‘Sue me’. Adelaide herself, as depicted by the brilliant Meow Meow, is the epitome of a long-suffering fiancée and screamingly funny in her numbers ‘A bushel and a peck’, ‘Adelaide’s lament’ (in which “a person can develop a cold”) and ‘Take back your mink’, all of which are an absolute joy. Recently seen with Barry Humphries in his Weimar Republic cabaret shows, Meow Meow is a great musical-comedy star.

Lara Pulver also shines as Sarah Brown in ‘If I were a bell’ and ‘I’ll know’. Paul Nicholas as Arvide Abernathy, Sarah’s grandfather at the Mission, contributes a moving rendition of ‘More I cannot wish you’. There are telling renditions too from Sharon D. Clarke as General Cartwright, Joe Stilgoe as Benny Southstreet and Sévan Stephan as Big Julie, looking not unlike Danny DeVito. Of course everybody waits for Clive Rowe to reprise his Olivier Award-winning performance as Nicely-Nicely, telling us to ‘Sit down, you’re rocking the boat’.

Supporting all these fine performances are chorus and dancers, all extremely well drilled by Stephen Mear and they are spot-on throughout; and the Royal Philharmonic Concert Orchestra play Loesser’s immortal tunes to full strength under James McKeon. All round it offers a great time for everyone concerned and would make a terrific touring show.