Occasionally one goes to the most beautiful restaurant where every smallest detail has been taken care of and has a dinner that is manifestly top notch, yet comes away afterwards with a feeling of slight disappointment. 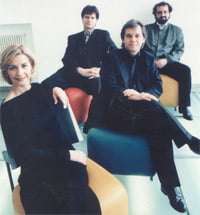 Had this concert been a three-course dinner, the auguries – in the form of one of Mozart’s very finest string quartets – would have been extremely encouraging. Mozart described the six quartets dedicated to Haydn – K428 is the second of them – as “the fruit of long and laborious effort” and, unusually, they occupied him intermittently for more than two years. Playing with rare flexibility and sophistication, the Hagen Quartet, three siblings plus a second violinist who has been a member for more than twenty years, gave it a fabulously nuanced performance. Some may have found it just too calculated but there was also a huge amount to admire.

In all four movements the Hagen unerringly hit the ideal tempo, non troppo in the opening Allegro, elevated yet never static in the musicians’ crystalline and patrician account of the Andante and with pauses perfectly judged in the faux-naif Minuet (with an absolutely hypnotic account of the trio). Perhaps the finale – marked Allegro vivace – was a tad relaxed but, like Klemperer’s sometimes slow tempos in Mozart, it allowed each moment to be fully savoured.

The next course, Bartók at his most terse and aphoristic, was equally well played, the musicians giving us perfect balance and security and yet there was a dimension missing. The work post-dates The Miraculous Mandarin and some of that work’s menace and violent unpredictability informs the quartet. Here everything sounded under control, volatility and danger in short supply. Perhaps the presence of microphones – the concert was being recorded for broadcast (on BBC Radio 3 on 25 March) – acted as an inhibitor but this felt too phlegmatic by half. Shortly before composing the coda Bartók had heard Berg’s Lyric Suite at the 1927 ISCM Festival and, as Misha Donat’s perceptive programme note makes clear, “it may well be that this scurrying passage was influenced by the novel sound-world … of Berg’s work”. In fact though, for all its splendour, the whole performance gave the impression of Bartók approached via Berg.

For the dessert – pudding? – Mitsuko Uchida joined the Hagen Quartet. If Brahms were ever thought to be either warm or glutinous, this performance would have proved the perfect antidote. There was much to admire – Veronika Hagen’s smoky schattenhaft viola almost ‘spoke’ in the work’s opening paragraph and throughout one sensed a flexibility of response perhaps only intuitively possible to a family-based group – but there was also the feeling of being emotionally short-changed with a literal rather than flowing account of the gently rocking Andante, un poco adagio and the scherzo’s ‘galloping’ rhythms remaining oddly earthbound.

This was undoubtedly a well-integrated performance, yet for all the manifest care lavished throughout, especially on quieter moments, the fundamental problem – and I write as an admirer of Uchida – Is she does not conjure from the piano the depth of sound for this particular piece. This felt like Brahms approached via Schubert’s ‘Trout’ Quintet rather than Brahms the leonine young post-Schumann Romantic. One appreciated the finely-judged detail but seldom experienced an inner glow, admiring but not moved.