The solemn, rather learned Overture didn’t give much away about the Britten Sinfonia’s epic and animated approach to Messiah. Thereafter, Jacqueline Shave, director and occasionally conductor, and the four soloists kept Handel’s tripartite, compressed meditation on the Christian faith – Advent and Nativity, Death and Resurrection, and Redemption – on a knife-edge between operatic mood-swings and oratorio sobriety. 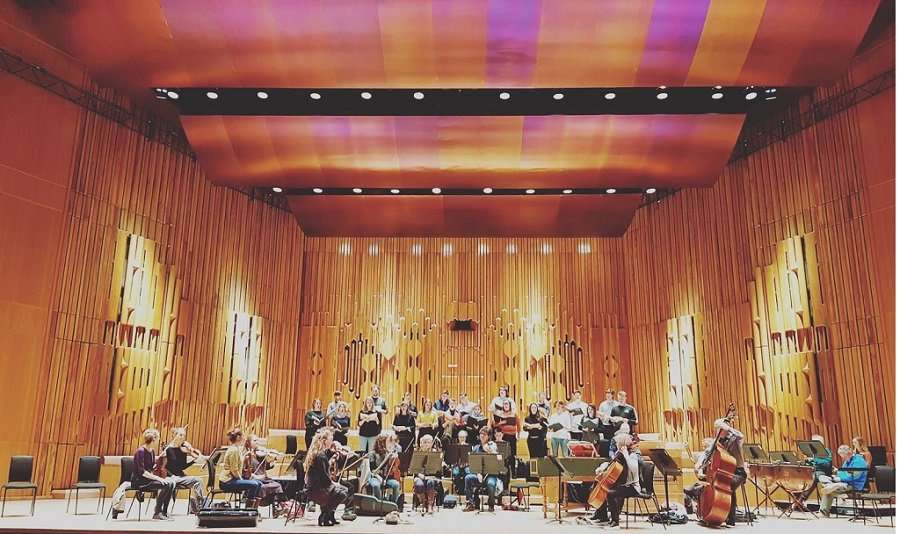 When I last heard the modern-instrument Britten Sinfonia and its associated Voices in a Christmas-time Messiah, the strings (here sixteen players plus woodwinds, matching the twenty-one-strong Voices) sounded not nearly so varied as they did here, moving from a bracing, slightly acidic penetration to a luminous glow, and the Voices were equally characterful and alive to Handel’s many dramatic opportunities. Shave has the knack of plugging her forces into a discreet but fabulously dynamic ensemble, and the majestic pace she set for the final ‘Amen’ chorus reminded you how brisk the performance was as a whole. In choruses such as ‘For unto us’, ‘Surely He hath borne our griefs’ and ‘Lift up your heads’, the Voices were impressively nimble and brilliant, even if they steered away from detonating the wonder in the mighty “Wonderful” moment in ‘For unto us’. They were even more virtuosic in ‘All we like sheep’, going astray with high discipline, and from the slenderest beginnings there evolved an ‘Amen’ of transcendent weight.

The sense of Advent darkness and expectancy made complete sense of Handel keeping the soprano under wraps until the Christmas section of Part One, and it was worth waiting for. Sophie Bevan’s sparkling, passionate singing in the sequence of recitatives and arias added its own sense of marvel, and you could only admire her skill at casting her voice onto a phrase and letting breath-control take charge of all the decorative work, so that, as befits an angel, the effortlessness seemed at one remove from human intervention. ‘I know that my Redeemer liveth’ stopped the clocks with Elysian grace, and her ‘Rejoice greatly’ added a generous ping of Italian operatic bounce – and more peerless ornamentation. Before that, Allan Clayton made an instant connection with a superbly outgoing ‘Comfort ye’, followed by a heroic ‘Every valley’, yet another example of operatic devotion. Later, in Part Two, he was formidably expressive in the sequence leading to a blistering account of the choral Q&A ‘Lift up your heads’.

Iestyn Davies hit the spot with a stern, compassionate ‘He was despised’, which, apart from being devastating, showed off the lower beauty of his countertenor and his cleverly schooled illusion of spontaneity, and earlier he shrouded ‘But who may abide’ in singing of bewitching intimacy and refinement. Every time Roderick Williams sang, he became as near to being an Evangelist narrator as Charles Jennens’s assembly of texts allowed, and his three arias declared his expressive powers, culminating in a sonorous ‘The trumpet shall sound’, made complete by Paul Archibald’s incisive, rather bluesy obbligato. For some reason, the two trumpets played from a window-like opening behind the choir in ‘Glory to God’, to odd visual effect, then with the timpani supplied much military swagger to ‘Hallelujah’, for which the full Barbican audience rose to its feet, and might just as well have stayed there for the standing ovation that greeted the grandeur of the final ‘Amen’. It is the season to be jolly, after all.