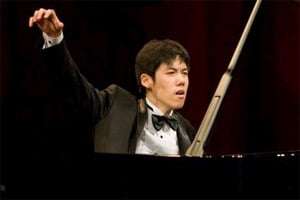 Though Flushing, Queens is just twelve miles from Carnegie Hall in New York City, it is a world away. Exiting the subway at the last stop, one walks through a pan-Asian delight of restaurants, bakeries and shops, New York City’s second largest Chinatown. The population here is largely Chinese and Korean, and that is reflected in the audience gathered in Flushing Town Hall for pianist Haochen Zhang’s recital. Some music-lovers lined up hours before this free concert, which was part of Carnegie Hall’s Neighborhood Concert Series, designed to bring performing arts to every corner of New York City. The performance was also a part of Carnegie’s festival – Ancient Paths, Modern Voices – celebrating Chinese culture, so this setting seemed especially appropriate.

Age 19, Haochen Zhang is the youngest pianist to win the Cliburn International Piano Competition, and the first Chinese player to take the Gold Medal. Not surprisingly, he has also racked up a number of other prizes, including the Tchaikovsky Competition for Young Musicians when he was twelve.

Zhang played Chopin’s 24 Preludes without sentiment, which was not to say he played without heart, but missing was the languid emotion that generally goes with the more lyrical examples in the set. Along with his straightforward and transparent approach, Zhang does have a particularly brilliant technique, and often dazzled with blindingly fast runs of notes.

One should be knocked out by a Cliburn gold medallist, but Zhang failed to stun. An excellent pianist, Zhang fell short of ‘outstanding’, based on this performance. To his credit, his contrasting use of dynamics added to the drama of his performance; fortissimos contained nary a hint of banging, his pianissimos were artistic, not merely soft, and he made good use of a multitude of volume levels in between, which brought out the colour of these Romantic-era works. A few of the selections toward the end of the set were indeed quite captivating in their variety of colours and timbres.

Zhang gave Ravel’s Gaspard de la nuit a most gentle and graceful touch, executing the fast passages in the middle of the piece in a delicate kitten-like fashion. He missed, however, the jazziness of the piece. He approached Liszt’s Rhapsodie espagnole with cartoon-like speed, and certainly his technique was up to the task, and he handled the rapidly shifting moods of the piece well. Zhang obliged with an encore, a flashy Chinese folk-song that some in the hall seemed to know.