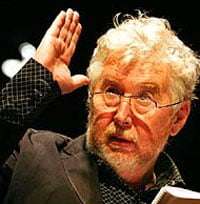 Four works – the first two without conductor – all introduced by the composer, Sir Harrison Birtwistle in conversation with Tom Service, came together in this inspiring “In Portrait” evening given by the London Sinfonietta. All the works were originally composed for the ensemble – Cortege for the re-opening of the Royal Festival Hall in 2007 and a revision of Ritual Fragment composed in 1989 in memory of Michael Vyner; Five Distances from three years later; the much older Carmen Arcadiae Mechanicae Perpetuum, composed as a tenth-birthday present for the Sinfonietta in 1978; and the new In Broken Images, the Sinfonietta giving the premiere in Italy last year (since when the opening has been revised).

Engagingly introduced by Tom Service, who had the tricky job of focussing Birtwistle to the job in hand, the first three pieces were prefaced not only by a conversation but also examples. Service had obviously spent some time choosing appropriate snippets, but this went by the board with In Broken Images before which – perhaps running out of time – Service gave up trying to illustrate the work and suggested we go straight to the performance. It’s not that Birtwistle is difficult to interview – as ever, he was very entertaining – but, however he at first chooses to analyse his music, it is never the full story, so he can change tack in mid-sentence (“no, I don’t like that analogy…”). 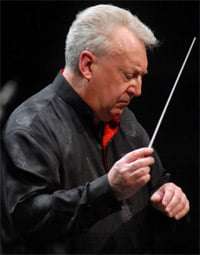 Of course, the music should do the talking, and Birtwistle’s music is complex, and for every partial explanation there is another, equally valid (if also partial). But Service’s enthusiasm for Birtwistle’s music and careful planning did pay dividends. In discussing Carmen Arcadiae Mechanicae Perpetuum, Service and David Atherton illustrated different strata (we heard four), as well as the various instrumental groups’ harmonic strands – building up to something like thirty separate combinations that lie behind the music. Birtwistle also revealed that he had written more music for the work, but had then randomly taken out portions, which enhance the sudden changes in mood of the music and governed by a sequence of random numbers provided by a Cambridge don, whereas in In Broken Images Birtwistle related that he didn’t need exterior impetuses to help generate his music, it had now become natural – “organic” as Service put it.

And the new piece certainly sounds – even on just one hearing – classic Birtwistle. With some twenty-six players separated into instrumental types – strings to the left of the conductor, woodwinds to his right, brass in front and percussion behind – In Broken Images unfolds with a cohesiveness that keeps the groups largely together with similar material, starting with an extended brass fanfare. It’s thrilling stuff.

It was fabulously well performed – a feature of all four performances, whether the slow theatrical unfolding of Cortege; the tangible space round a wind quintet in Five Distances – spaced as far apart as they could get on the QEH stage (Service asked Birtwistle if he had solved the ‘problem’ of the wind quintet in this piece; he characteristically quipped “No”); and the complex intertwining of Carmen Arcadiae Mechanicae Perpetuum.

Before In Broken Images, Birtwistle mentioned that during the interval someone had thanked him for “dispelling the mystery”, to which he confided that he certainly hoped he had not done so, as the mystery of music is what makes it fascinating. After such an invigorating evening, I liked the idea that what we had in fact attended was a concert “spelling the mystery.”