“He Who Gets Slapped” 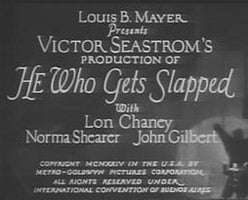 Victor Sjöström (1879-1960) was a celebrated Swedish actor and director. He worked in the United States from the 1920s and had the distinction of being the man who directed MGM’s first feature film, “He Who Gets Slapped”. His most famous film appearance as an actor is probably as the old man in Ingmar Bergman’s “Wild Strawberries”. When he went to the States his Swedish name was Americanised to Seastrom, an almost phonetic pronunciation of his actual name. In 1924 the MGM film-company was strictly speaking still just Metro-Goldwyn, an amalgam of Metro Pictures and Samuel Goldwyn’s company. Louis B. Mayer was not to join until a year later, although his name does appear on the opening credits of “He Who Gets Slapped”. The film is based on a Russian play by Leonid Andreyev, first performed in Russian in 1914 and in English in 1922. It was filmed in Russia in 1916. The American silent version, with ‘intertitles’, was a great success and, among other things, was the first film to feature the MGM lion, who also plays an important role in the picture.

“He Who Gets Slapped” shows the subtler side of the actor Lon Chaney, known on account of his ability to disguise himself in multifarious roles as “the man of a thousand faces”. His appearances in the silent versions of “The Phantom of the Opera” and “The Hunchback of Notre Dame” are probably his most well-known but he also appeared in over 150 films and only one, “The Unholy Three”, his last in 1930, had sound. As an actor in silent movies he only had his face and body to indicate appearance and express emotions but in that hardest of art forms he was king. Born to deaf parents he was always accustomed to using his face and body movements to communicate, so this made him a natural for the silent screen. He was a brilliant artist with spectacular methods of using cosmetics and he became an authority on the art of make-up. Essentially a character-actor, he would often physically change his body, even disfigure himself, to achieve greater credibility. He was known to bind his calves to his thighs in order to appear leg-less, or dislocate his arms and strap them down to play an arm-less man. Appearance counted for everything so that with the coming of sound, Chaney lost interest while the films became stagey and inert to accommodate dialogue.

Composer and musician Will Gregory has worked with Tears for Fears, Bill Nelson, the Michael Nyman Band and David Murray, although he may be best known for being one half of electronica-duo Goldfrapp. As part of The Gas Giants, a Bristol-based duo with Tony Orrell on drums and Gregory on keyboards and saxophones that moved between pop, jazz and electronica, Gregory developed an interest in making music to accompany silent films. Having found that many silent films were stuck in the rut of badly acted melodrama, he was pleasantly surprised to come across the subtleties inherent in “He Who Gets Slapped”. His group produced a score to accompany the film and there were just two performances of it in Bristol. However, they still felt the film deserved better, a bigger score to match the epic scale of the film. When given the opportunity to update, rewrite and orchestrate it for the BBC Concert Orchestra, Gregory leapt at the chance.

“He Who Gets Slapped” is about a budding scientist, Paul Beaumont (Chaney) who has his ideas stolen by his patron, the Baron Regnard (Marc McDermott) and is humiliated in front of his Academy scientific colleagues and in a final confrontation is slapped in the face by the Baron. However, instead of crying, Paul laughs his head off, just as anybody would when they see somebody getting slapped in a play, on film or, more significantly, in a circus setting. Having been humiliated as a scientist, he gives up his work and becomes … a circus clown.

Will Gregory has produced an epic score that matches the visuals perfectly. In the silent-cinema era, musical accompaniment was generally by a pianist or at most a small group of musicians. Here “He Who Gets Slapped” has a 60-piece band to convey all the moods, comic and dramatic, that the film offers. As well as the BBC Concert Orchestra, Gregory has his own musicians who provide the jazz element of the score. There is a full range of moods: grand marches for the parade sequences in the circus and soft and sweet music for the scenes between the lovers. In the early days, the silent-movie accompanist would improvise a score often using excerpts from well-known classical music or popular songs of the time. Did we detect a quotation from the sextet in Donizetti’s “Lucia di Lammermoor”, and perhaps an influence from some Russian composers?The music certainly adds a vital element to the film.

Of course there never was anything really called ‘silent movies’ as they always had a musical accompaniment. Here Gregory incorporates sound effects for whenever the hero gets slapped and much use is made of saxophones for any scene demanding some really raucous sounds. Charles Hazlewood controlled the musical forces with admirable discretion, following the film frame by frame. The BBC Concert Orchestra produced a brilliant sound that enhanced the film probably more than it has ever been in its lifetime.

The score again received two performances, at the Colston Hall in Bristol and here at the Queen Elizabeth Hall, but you can hear the music on BBC Radio 3 on Friday 1 February 2008. It will certainly be worth your attention, although it might also be a good idea to screen the film on television with the accompanying score.