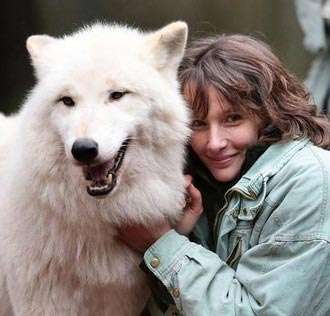 In the past, Hélène Grimaud has capitalised on the maverick end of her artistry in all its impetuous spontaneity. This new programme, which the French pianist – protector of wolves, human-rights activist, and writer – is touring plays to her talent for control.

The darkened auditorium directed attention on the tough but vulnerable artist’s progress through almost an hour’s-worth of water-connected pieces played as a sequence without anything so disruptive as applause (although there was one rather miserable attempt), the end of one piece decaying into the start of the next, the ebb and flow of the concert’s first half anchored by the elemental rhetoric of the teenaged Brahms in the second – you were one moment lost in admiration for her uncompromising presentation – an approach also adopted, for example, by Richter and Michelangeli – and, in my case, unworthily nagged by doubts over the hubris of the event, in which the recital itself becomes the artwork. Yet Grimaud clearly communicates with her public, if the generous standing ovation at the end is anything to go by. If I find her performance persona overly self-contained, hedging her bets between alluring mystique and connective warmth, it’s only because it gets in the way of some magnificently astute and red-blooded playing.

Her sense of identification with each of the eight watery pieces was spot-on. The ear-stretching start of Berio’s brief Wasserklavier summoned up the long-range expectation of the Rheingold prelude, with Grimaud picking her way through the music’s finely-wrought, liminal melancholy to depict the familiar mystery of her chosen theme. This and Takemitsu’s Rain Tree Sketch II owed as much to northern romanticism as to southern impressionism, an unruffled limbo blown away by Fauré’s disquieting F sharp minor Barcarolle, in which Grimaud illuminated the music’s enclosed chromaticism with impressive clarity.

The sun came out in Ravel’s Jeux d’eau, and Grimaud seized the opportunity to show off her incandescent technique at its tumescent best, brilliantly capturing the glorious, pointless exuberance of fountains at play. Her playing in ‘Almería’, Albéniz’s wonderful portrait of the hazy shimmer of a city by the sea, disentangled the complex rhythms with careless ease, the contrast between lassitude and eruptive energy digging into the Iberian soul.

The high-point was her visionary reading of Liszt’s ‘Jeux d’eau à la Villa d’Este’ (from his Years of Pilgrimage), Grimaud’s virtuosity defined by the strength and evenness of her left-hand. In the first movement of Janáček’s In the mists, she filtered layered stillness through a fragmented atonality, and she rounded off her sequence with a high-definition, wide-screen invocation of Debussy’s ‘Submerged Cathedral’.

Grimaud’s selection only made you realise the inexhaustibility of the watery theme, but I didn’t quite buy her choice of Brahms as the source of everything that had gone before. The Second Sonata is, though, a force of nature and a monster of a work. Grimaud’s control of its inclination to rhapsodic bagginess was exceptional – structurally secure, its debt to Beethoven and Schubert celebrated, Grimaud and her vast-toned, rather clangorous Steinway giving an epic illusion of its symphonic reach. Grimaud’s three encores were Debussy’s Étude pour les arpèges composés, a Rachmaninov Etude-tableau (the third of the Opus 33 set) and the first Capriccio from Brahms’s Opus 116 collection. Expect a release of Water Reflections on Deutsche Grammophon in November.