Hello, Dolly!
Musical based on Thornton Wilder’s play The Matchmaker, music and lyrics by Jerry Herman, book by Michael Stewart 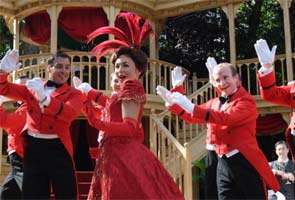 The genesis of “Hello, Dolly!”, one of the most successful musical shows ever to appear on Broadway, doesn’t begin with an adaptation of “The Matchmaker”, Thornton Wilder’s 1955 play about a widow who encourages two young couples to defy their boss and enjoy a night on the town. It goes further back. Wilder had written the play seventeen years earlier as “The Merchant of Yonkers”, but the farce had flopped. This had been based on the 1842 play “Einen jux will er sich machen” (He wants to go on a spree) by the Austrian playwright Johann Nestroy, which, incidentally, was also the source of Tom Stoppard’s 1981 play “On the Razzle”. The Nestroy play was itself based on an English play, “A Day Well Spent” by John Oxenford, dating from 1835. There was also another version of the same story, Percy Gaunt and Charles H. Hoyt’s musical “A Trip to Chinatown” which ran for over 600 performances in the 1891-2 New York season! “Hello, Dolly!” must be the most successful version of a story whose source dates back nearly two centuries.

Thornton Wilder beefed up his second version of the play by giving more attention to the character of Dolly Levi, hence the title “The Matchmaker”. Composer-lyricist Jerry Herman wrote “Hello, Dolly!” as a vehicle for Ethel Merman, but she turned it down, as did Mary Martin, although both actresses did eventually play the role, as did many grandes dames such as Ginger Rogers, Martha Raye, Betty Grable, Pearl Bailey, Dorothy Lamour and Phyllis Diller. Producer David Merrick considered Nancy Walker for the part of Dolly but eventually it went to Carol Channing, hitherto known mainly for playing Lorelei Lee in the 1949 musical “Gentlemen Prefer Blondes”. Dolly became Channing’s signature role.

After poor try-outs in Detroit and Washington DC as “Dolly, a Damned Exasperating Woman”, changes were made and another song was added, the Act One finale, ‘Before the Parade Passes By’. And, when David Merrick heard Louis Armstrong’s recording of the song ‘Hello, Dolly!’, he changed the title of the show and the rest is history. It opened in New York in January 1964 and ran for nearly 3,000 performances and toured with Yvonne De Carlo and Alice Faye. As was her wont Merman closed the Broadway run with two songs, ‘World, Take Me Back’ and ‘Love, Look In My Window’, written for her and reinstated.

The show came to London with Mary Martin (Dora Bryan took over) and there have been revivals in New York and London, including one with Channing. The show opened in the same season as “Funny Girl”. Who would have thought that five years later its star, one Barbra Streisand, would be playing Dolly Levi in the film version? And by coincidence another star of “Funny Girl”, Samantha Spiro, from the recent Chichester Festival Theatre production, is now playing Dolly in the current revival.

Streisand was 27 when she essayed Dolly Levi and her youth was more than noticeable. Dolly is a widow, a youngish widow in her forties, who is looking for another husband. She has spent long enough on her own, arranging other people’s marriages. She now has her eye on Horace Vandergelder, the ‘Merchant of Yonkers’, owner of a hay and feed store and allegedly well-known and wealthy. She encourages Horace’s daughter Ermengarde and her artist boyfriend Ambrose to have a good time in New York City, along with Cornelius and Barnaby, Horace’s clerks at the store. Horace himself is planning to meet the widowed milliner Irene Molloy with marriage in mind but Dolly pretends she has a better offer, one Ernestina Money, an heiress every bit as good as her name. They all meet at the Harmonia Gardens Restaurant for a disastrous but ultimately rewarding evening.

Much of the comedy is farcical and it is well handled in Timothy Sheader’s hectic but brilliant production. The scenes in Irene’s hat shop where Cornelius and Barnaby hide from Horace is akin to the best of Feydeau. And Spiro makes the most of her dinner scene while Horace is trying to get a hold on why the world seems to have gone mad. The staging of the musical numbers is impeccable and everybody dances extremely well. Stephen Mear’s choreography does wonders with ‘Put On Your Sunday Clothes’, ‘Dancing’, ‘The Waiters’ Gallop’, ‘Motherhood March’ and ‘Elegance’. (Incidentally, Bob Merrill, lyricist for “Funny Girl”, wrote the last two numbers.)

The title number brings the house down with tap-dancing waiters brandishing trays and scooting off in all directions while dancing up a storm: wonderful stuff. Samantha Spiro seems to have been born to play Dolly Levi and she breathes real life into the role. Dolly is indeed exasperating, but deep down she’s all heart. A great musical talent, Spiro is a star. Allan Corduner’s Horace blusters to good effect. He’s a mean, Scrooge-like figure who can’t quite grasp what’s going on around him. Daniel Crossley and Oliver Brenin as Cornelius and Barnaby, the two ‘innocents abroad’ in the big city, are suitably gauche and gawky. Josefina Gabrielle’s Irene is a nice mixture of elegance and worldly wisdom, and she sings ‘Ribbons Down My Back’ with a delightful wistfulness. Annalisa Rossi’s Ernestina is a genuinely hilarious comic creation, half-woman, half-monster.

The settings are limited but handsomely arranged; the staging makes the most of a wooden unit that turns into Horace’s store, a hat shop and a restaurant with very little effort. And the way a steam train is created must be seen to be believed. This bright, fresh production seems even better than the original, which had an air of old age about it even before it opened.