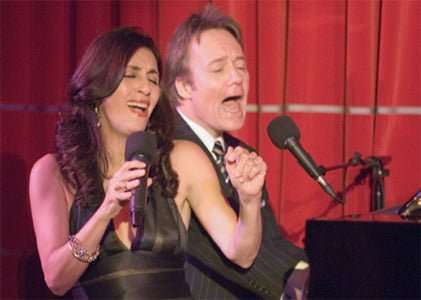 Singer-pianist Eric Comstock and vocalist Barbara Fasano bring a touch of New York to London’s cabaret scene with their finely honed double-act saluting the city they call the “most stimulating and surprising” in the world. Their act could also be labeled stimulating and surprising – the latter because they do not serve up the menu one might expect from the title of their show. Numbers such as ‘Penthouse serenade’, ’42nd Street’, ‘Down in the depths on the 90th floor’ or ‘I happen to like New York’, are not to be heard. There are a couple of songs that are purely paeans to the “wonderful town”, but most of them reflect the moods and atmosphere of city life or are derived from shows set in New York, such as Subways Are For Sleeping, and Promises, Promises.

Sometimes the connection is a little tenuous – ‘The surrey with the fringe on top’ seems to have been included because it gives Fasano a chance to display her voice at its sultriest. The arrangement is similar to the one made famous by Lena Horne, and it’s a valid appropriation for Fasano’s singing is often strikingly similar to the great Lena. Comstock has the perfect cabaret voice – tuneful (though sometimes straying from the composer’s melodic line) with beautiful enunciation and full value given to the lyrics. He is particularly effective on a medley of two Latin-American numbers by Harry Warren, ‘She’s a Latin from Manhattan’, words by Al Dubin, including the rarely performed verse, and ‘You discover you’re in New York’ from the movie The Gang’s All Here, with playfully witty lyrics by the under-appreciated Leo Robin.

Comstock and Fasano’s jazz-tinged duets evoke Jackie and Roy, celebrated singers of an earlier era, and they are splendidly backed by the sumptuous-sounding bass of Simon Woolf. The singing is punctuated with witty quips and biographical anecdotes. They have been married for nine years and bring an exceptional warmth and conviction to love-songs. These include such rarities as ‘I cannot hear the city’, a Marvin Hamlisch-Craig Carnelia ballad from The Sweet Smell of Success, and ‘I wouldn’t trade you’ by John Pizzarelli and Jessica Molaskey, in which the tempting offers resisted as trade-ins include “playing the Palace or the Met with Callas”.

Other outstanding numbers include Frank Loesser’s ‘My time of day’ (Comstock believes Guys and Dolls is the greatest of all New York musicals), Harold Arlen and Johnny Mercer’s Oscar-nominated ‘My shining hour’, Jim Lowe’s wryly humorous nod to the moneyed seaside area of Long Island, ‘The Hamptons’, and one of the finest songs of lovers’ parting, ‘Some other time’ from Leonard Bernstein, Betty Comden and Adolph Green’s On The Town. “Where has the time all gone to?”, the lyrics ask, a sentiment that one echoes at the end of the evening, as the lights come up and one is back in London rather than the New York that has been so pleasurably evoked.