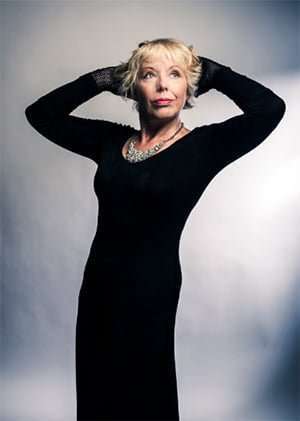 Eight months on from her last appearance at the Crazy Coqs cabaret room, Barb Jungr makes a welcome return with an almost completely new programme that is even better than her earlier one, perhaps because the theme of night-time conjures up so many variations on the universal themes of love both lost and found, embracing a myriad of emotions. Composers she favours, such as Bob Dylan, have been inspired by the subject, and Jungr has a fund of revealing and witty anecdotes, occasionally self-deprecatingly wistful, while often hilarious.

She lets us know that she once did shift work as a barmaid at a “boutique hotel” in the Portobello Road where she helped guest Leonard Cohen avoid an eccentric stalker. She concludes that love can make people “horrible” to one another, cueing The Beatles’ number about a love suddenly withdrawn after a spell of passion, ‘The night before’. She then couples songs that she originally thought belonged to a man and a woman respectively, but now realises that “either could be either”, Kris Kristofferson’s ‘Help me make it through the night’ (a superbly bruised performance and a highlight of the evening) and Goffin & King’s ‘Will you still love me tomorrow?’.

She becomes searingly earthy when, after pondering the subject of revenge, she attacks Hank Williams’s ‘Your cheatin’ heart’ with some soul-singing that stopped the show. Dylan is responsible for a tour de force on Jung’s part when she starts the evening with his challenging opus, ‘It’s alright, ma, I’m only bleeding’ – all dozen or so choruses! Only two of the songs in her programme come from the pre-1950s era, Kurt Weill & Maxwell Anderson’s ‘Lost in the stars’, handled with plaintive sincerity, and Irving Berlin’s ‘Let’s face the music and dance,’ given an uninhibited, driving performance.

Leonard Cohen is featured twice, with ‘First we take Manhattan’ and ‘1000 kisses deep’. Other numbers in her captivating selection include Bruce Springsteen’s ‘Dancing in the dark’, Neil Diamond’s ‘Red red wine’ and ‘In the middle of the night’, an effective composition by Jungr and her pianist, Simon Wallace. Jungr’s command is such that she even had us joining in for some choruses during Andy Williams’s 1963 hit, ‘Can’t get used to losing you’. Her penultimate number is the only one she performed previously, a joyously strutting version of the Anthony Newley-Leslie Bricusse song ‘Feelin’ good’ from The Roar of the Greasepaint, the Smell of the Crowd, which sums up the atmosphere of the room as Jungr went into her all-too-soon closing number, gently caressing the comfortable sentiments of Dylan’s ‘I will be your baby tonight.’