How to Succeed in Business without Really Trying
Musical in two Acts, based on the novel by Shepherd Mead, music by Frank Loesser, with book by Abe Burrows, Jack Weinstock & Willie Gilbert 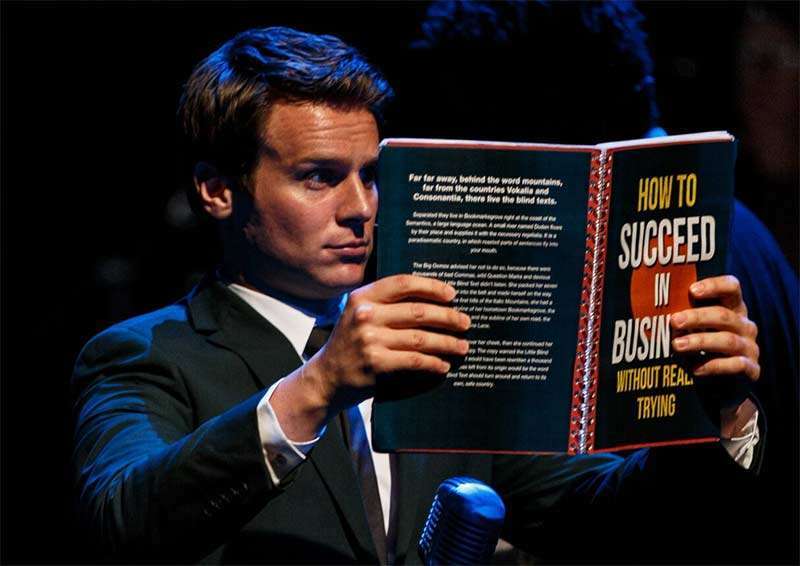 Over a decade after his smash hit, Guys and Dolls, composer and lyricist Frank Loesser teamed up again with book-writer Abe Burrows (and other collaborators) in a musical adaptation of Shepherd Mead’s novel How to Succeed in Business without Really Trying, which opened on Broadway on 14 October 1961. It was last seen in Britain at Chichester in 2005, while the 50th-anniversary production on Broadway starred Harry Potter himself: Daniel Radcliffe (Matthew Broderick had starred in a previous Broadway revival). It now makes its Royal Festival Hall debut in a concert performance masquerading as a radio recording with a tip-top British cast, save for the lead role, which brought Jonathan Groff back to London after his stint with Simon Russell Beale in Ira Levin’s pot-boiler Deathtrap back in 2010.

Probably best known for TV’s Glee, Groff has a long history in musical theatre, and made his Broadway debut as Melchior in Spring Awakening (having created the role, off Broadway, in 2006). He has an utterly disarming and fresh-faced likeability, which is perfect for the role of J. Pierpoint Finch (‘Ponty’ for short), who uses the self-help book of the title to make his way rapidly up the executive ladder (from post-room to chairman) of the World Wide Wicket Company and gets the girl to boot. 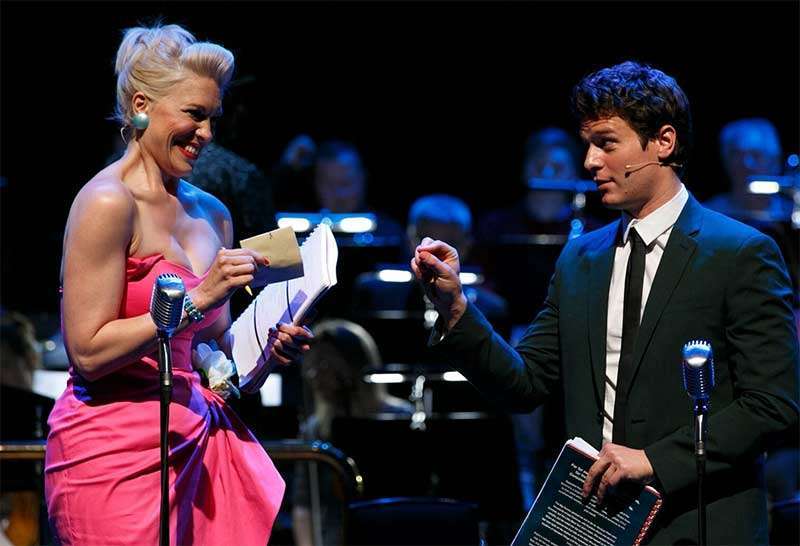 It’s a frothy concoction which, although without the hit rate of Guys and Dolls, has an equally witty book – perhaps the best musical set in the workplace. For anyone bemoaning the demise of Mad Men this was the perfect antidote (rather like a comedy after the Athenian trilogy of tragedies to send audiences away happy); set in the same 1960s’ world of company in-fighting, and even ending on a rather disastrous TV-advertising campaign. It also reminded me of Bewitched, but that probably betrays my age.

The Voice of the Book – sonorously recorded by cast member Nicolas Colicos – follows Finch wherever he goes, having the answer to everything, although you get the impression that Finch adds a little of his own chutzpah to the mix as a tinkle in the orchestra and a solo spot lights up Groff’s impish smile as a well-prepared action comes to fruition. One such moment is his inveigling into company president J. B. Biggley’s good books by learning he’s an Old Ivy boy and is a Groundhog supporter (so Finch professes to be so too), or getting Biggley himself in suggesting his bit-on-the-side Hedy La Rue to front the (ill-fated – but perhaps that was Finch’s plan) television promotion. And he’s a quick thinker too, finding out that Chairman Womper was a window cleaner, a profession – this time quite truthfully – Finch also started out as. So it’s no surprise Finch – having become a Vice President by the show’s interval – replaces Womper as Chairman at the end. 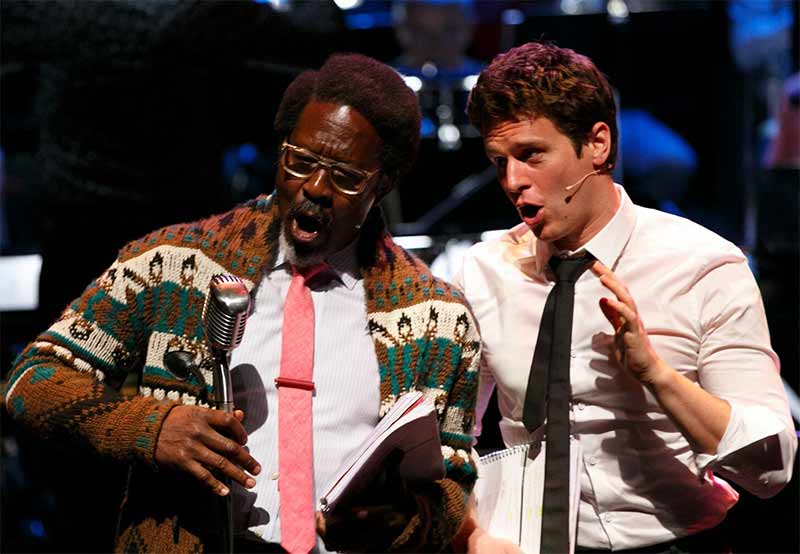 Along the way office politics comes under the musical spotlight as in ‘A Secretary is not a Toy’ and the all-too-addictive ‘Coffee Break’, while the convention of buying a new dress to impress for a reception is lampooned mercilessly as no fewer than six secretaries buy the same outfit, apparently not so Paris Original (here simply represented by a white-chiffon scarf). Most memorable of all is Mr Twimble’s office equivalent of a patriotic song, ‘The Company Way’, which has seen him achieve promotion after 25 years!

Finch, though, is in much more of a hurry, and in his meteoric rise he can’t see what’s staring him in the face – the love of Rosemary Pilkington who has had eyes from him at the start. Even fellow-secretary Smitty’s attempt to get them together (‘It’s Been a Long Day’) nearly falters, while the same song complicates the Biggley and La Rue affair as Biggley’s nephew (and Finch’s arch enemy) Bud Frump realises that his uncle is attempting an affair with the girl he’s given a job too.

Suffice to say, despite the sudden disaster of the advertising promotion, Finch manages to pull everyone round in the end with ‘The Brotherhood of Man’ – one of the most infuriatingly infectious melodies known to man – and finishes with the top job and the girl. No wonder this performance ended with a standing ovation.

Joining Groff was a roll-call of great musical talent from (bottom up) Clive Rowe as both long-serving post-room manager Twimble and chairman Womper, gorgeous Cynthia Erivo as Rosemary, pink-clad, platinum-blonde Hannah Waddingham as Hedy and Clarke Peters as knitting-loving Biggley (guess what, Finch professes to be a knitter too…).

And they were having fun – as the whole cast, seated in front of the Royal Philharmonic Concert Orchestra the whole time, couldn’t help showing (not least when Peters had to adlib as he couldn’t find his next line). Just as with ENO’s recent Sweeney Todd import, there was a framing device, introduced by Groff, that it was being recorded for a radio broadcast, introducing us to two associate directors sitting stage-left who had an assortment of sound-effects to add to proceedings – closing doors, typewriting clacking and, most prominently, telephone noise, not just the rings but the picking up and putting down of the receiver.

For the recording ruse there were also old-fashioned microphones along the front of the stage, although they seemed to be there only for decoration as everyone had head mikes. And therein lies a lasting niggle. With even the orchestra souped-up (!), the amplification dried out the atmosphere. In the end the sheer pep of Jonathan Butterell’s direction kept it at bay – and should it in fact have been recorded for radio, it might sound better on-air than in the RFH. And it was all helped along by pork-pie-hatted Mike Dixon’s energetic conducting of the 30-strong RPCO at the back of the blacked-out Royal Festival Hall stage (no sign of the choir stalls or the organ, covered by drapes). While dominated by brass and woodwinds, the modest string section helped with the overly-romantic Grieg Piano Concerto quote in ‘Rosemary’ at the end of the first Act.

So, all credit to everyone’s hard work for this single performance: on this occasion they really succeeded in show business!