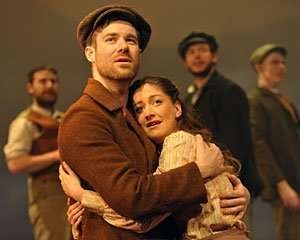 From its launch in 1984, the trump card of this glorious musical has been the majesty of Howard Goodall’s choral writing. In its day The Hired Man may have been more successful at garnering awards than audiences, but it blazed a trail that encouraged subsequent musicals – Les Misérables and Miss Saigon among them – to wrench the emotions through the power of voices raised in stirring song. A shame, then, that with a mere twelve singers in Daniel Buckroyd’s new staging (a co-production between the Mercury Theatre and the Curve in Leicester), great set pieces such as the unforgettable ‘Song of the Hired Men’ are denied their due heft.

Still, twelve is better than eight, which was the size of Buckroyd’s squad the last time he directed Melvyn Bragg’s tale of early-twentieth-century Cumbrian peasant life. That self-styled ‘chamber version’ for the New Perspectives company toured far and wide in 2007-8, and despite its meagre forces it made many new friends for a show that Andrew Lloyd Webber himself once championed as the great British musical. 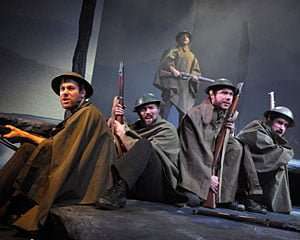 Aside from that numerical grouse it is hard to find fault with the new incarnation. Though stylistically similar to its pocket predecessor, the Mercury version has higher production values and a more gripping sense of harsh lives being lived by real people. The increasingly fashionable actor-musician approach suits it well and is never intrusive, while Richard Reeday’s discreetly authoritative musical direction plays a huge role in the delivery of a taut, polished drama.

The trickiest of Goodall’s demands are in matters of vocal range, but David Hunter as John Tallentire, the eponymous hero, conquered the baritone-to-high-tenor leaps with no discernible break in his mellow voice. Admittedly his outburst of anger in ‘What a Fool I’ve Been’, a song whose tingling piano accompaniment so powerfully suggests a rush of rage-fuelled blood to the head, was disappointingly low in voltage; but calmer moments in the more reflective numbers (not least the moving ‘No Choir of Angels’) were beautifully handled. 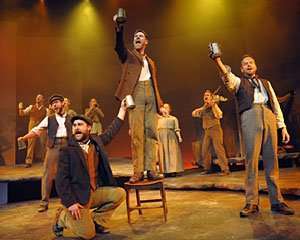 While the versatile and mesmerising musical-theatre-mezzo Julie Atherton is not entirely suited to the soprano tessitura of Emily, John’s wife, she covered the cruelty of her high-lying material with some accomplished vocal techniques which she allied (to devastating effect in the musical’s closing scene) to a searchingly truthful dramatic interpretation. Other stand-out performances in a uniformly strong ensemble cast came from Gary Tushaw as Seth, John’s dour, politically-driven brother, and from Jill Cardo who fleshed out the lightly-sketched character of May (John and Emily’s daughter) into a vivacious, funny and affectingly sung personality.

The twin stars of the show, though, are Juliet Shilllngford’s four-level set of rough-hewn slate and Mark Dymock’s subtly evocative lighting that it accommodates so successfully in order to shift location from the hills of Crossbridge to the mines of Whitehaven and the trenches of France. Even the drama’s climactic near-calamity at the coal face is brought to plausible and vivid life in this flexible environment.

Goodall returned to The Hired Man in 2004, at the time of a Salisbury Playhouse revival, and added a haunting new song for the company. ‘Day Follows Day’ is an inspired composition that brings vital repose after an intense depiction of the Great War and combines an almost carefree mood of soprano sweetness with an undertow of melancholy and loss. It is the most sophisticated piece of writing in the score, and Buckroyd has staged it with a direct fluency that crystallises his evident love of the work as a whole. Tears flowed.