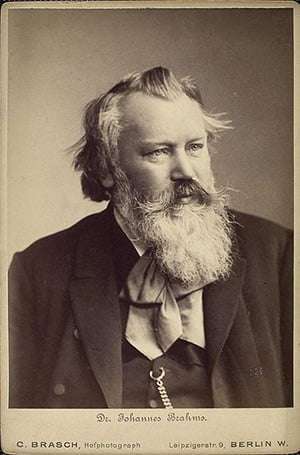 Ian Hobson is now more than two-thirds through a most ambitious project: performing Brahms’s complete works for solo piano and all of the chamber works with piano. This was the tenth of fourteen recitals at the DiMenna Center that continue through November 14. In this concert, Hobson was joined by J. David Harris and Dmitry Kouzov, all three are professorial colleagues at the University of Illinois (Urbana-Champaign), where Hobson led a similar Brahms project in 2012. Cary Hall is the larger of two spaces at the DiMenna Center. It provides marvelous acoustical intimacy, but because the performers and audience are seated on the same level, sightlines are so poor that much of the audience had little or no view of the musicians.

Brahms, in his late fifties and not having made available a new work for several years, was contemplating retirement, but on a visit to Meiningen In 1891 he was inspired by the playing of clarinetist Richard Mühlfeld. The result was the Trio (Opus 114) and the Clarinet Quintet, and – after an outpouring of piano pieces (Opuses 116-119) – the two Sonatas for Clarinet (or Viola) and Piano engraved in 1894 as Opus 120 and very nearly Brahms’s final instrumental compositions (following the Four Serious Songs, there were to be 11 Chorale Preludes for organ published posthumously as Opus 122). In this concert, Harris performed in the Trio and the Second of the two Sonatas. (The First will be performed on viola in a subsequent recital.) Kouzov, in addition to the Trio, joined Hobson in Brahms’s two Cello Sonatas, which, as they were written two decades apart, offer an interesting insight into Brahms’s development as a composer.

The Clarinet Trio is rife with gorgeous melodies and rhapsodic interplay, particularly between the clarinet and cello, and both instruments resonated beautifully as their melodic lines intertwined, with Kouzov’s cello producing a particularly rich sonority. His 150-year-old French instrument was made by François Caussin, modeled after instruments by Giovanni Paolo Maggini some two centuries earlier. The piano is most often in a supportive role, which Hobson performed admirably, but he also more than held his own whenever the piano was in the forefront. The performance showed off not only the virtuosity of the three players, but also the depth of their partnership. Harris and Kouzov shone in the romantic Adagio and Hobson’s playing generated lively impulse in the concluding Allegro.

The second half of the concert opened with the E flat Clarinet Sonata, which gave Harris an even greater opportunity to show off his brilliant technique and marvelous tone production and with seamless changes of register. Hobson again proved a fine and sensitive collaborator. This work demonstrates Brahms’s capacity for melodic invention and his superb ability to bring out the best qualities of each instrument. The Allegro amabile’s beautiful melodies made one regret that it had to come to an end, although the second movement Allegro appassionato began in a rather similar vein, both in harmony and tempo. An interesting set of Variations in which Hobson’s piano was dominant at times brought the piece to a sunny finish.

Each half of the program ended with one of Brahms’s two Cello Sonatas. The E minor was Brahms’s first duo-sonata, from 1865 when he was in his early thirties. Hobson and Kouzov gave an outstanding performance, never rushing the pace in the opening Allegro non troppo, the cello singing out gloriously. Although the principal theme that dominates the movement is in the minor, Brahms’s youthful optimism came through clearly. The two instrumentalists combined to shape the sprightly theme of the Allegretto quasi Menuetto, with Kouzov’s expressive undulating melody in the Trio giving lyrical voice to what amounts to a variant on the earlier theme. The Allegro, dazzlingly played here, pays homage to J. S. Bach, its fugally developed theme based on ‘Contrapunctus 17’ from The Art of the Fugue.

The Second Cello Sonata was composed in 1886, and is harmonically richer and more fully realized than its predecessor. It begins dramatically at a brisk Allegro vivace, the thematic material undergoing intensive development. And where the first movement of the E minor has to do double duty for lack of a separate slow movement, the F major has a lovely Adagio affetuoso beginning at the very bottom of the cello’s range, immediately leaping to its highest registers to sing out the lyrical theme. The work also shifts focus toward the piano, enabling it to be more of an equal partner, yet it also puts the cello through more varied technical paces than did the earlier work. Hobson and Kouzov were fully up to these challenges, playing with particular intensity and warmth in the scherzo and trio, and then a genial performance of the Allegro molto finale. As an encore the duo offered the first of Schumann’s Fantasiestücke (Opus 73).