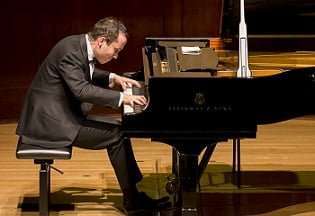 Word had got around … Igor Levit is rather good at playing Bach and Beethoven, something enhanced by his Sony Classical recordings, and the Wigmore Hall was full.

However, the main attraction of the recital, an opportunity to sample Levit recreating Rachmaninov, the Opus 39 set of Études-tableaux, and thus extend appreciation of his sympathies, was removed by a change of programme, the ‘Hammerklavier’ Sonata offered instead, of which Levit gave a compelling reading in terms of commitment, focus and character. The first movement, agreeably marrying majesty and impetuosity, nevertheless threatened to run-away at times, and Levit’s broad rhetoric tended to halt the flow. The succeeding scherzo, if short on wit, was high on the movement’s dysfunction. The Adagio sostenuto, not as spacious as some and overly restless, was of earthly pleasures, private passions melting into tender asides and, occasionally, otherworldly assignations. As for the fugal excesses of the finale, Levit tore up the rule-book and set the music alight, his incendiary approach at once abandoned yet controlled.

The other, very different, Beethoven Sonata, the compact two-movement Opus 54, opened the programme. Levit’s individual approach made this work seem new – solemn, punchy and with accents attacked, true to the composer. Contrasts abounded, not least regarding dynamics, detailing and touch. The following J. S. Bach Partita was richly expressed and soul-stirring, the central ‘Sarabande’ made sublime – the audience eavesdropping on its transporting qualities – and throughout the six movements counterpoint was captivating, its intricacy made lucid.

Ronald Stevenson’s Peter Grimes Fantasy (1971) is not as extensive or as all-encompassing as it might be, tending to highlight Grimes’s desolation, tragic fate and the eerie danger of Britten’s opera. Levit gave a gruff, powerful and wonderfully evocative account of this made-from-within transcription, although those plucked notes played from inside the piano were barely audible and lacked any real consequence. If he hasn’t already, maybe Levit will go on to tackle Stevenson’s ambitious Passacaglia on DSCH, not least while this composer-pianist (born in 1928) is still with us. As an aside, Gerald Larner, in his programme introduction for Grimes, was erroneous to suggest that the Passacaglia “lasts not far short of two hours”. In fact it is around 80 minutes and Stevenson’s own recording totals 75.

Following the ‘Hammerklavier’, Levit gave an encore in the form of a Bach Chorale Prelude arranged by Busoni. I believe it was ‘Nun komm’ der Heiden Heiland’ (BWV659). It was certainly played with the deepest feeling and also suspended time, Levit again superb at being sublime. After which he took delivery of a Critics’ Circle award. Igor Levit returns to Wigmore Hall several further times this season.