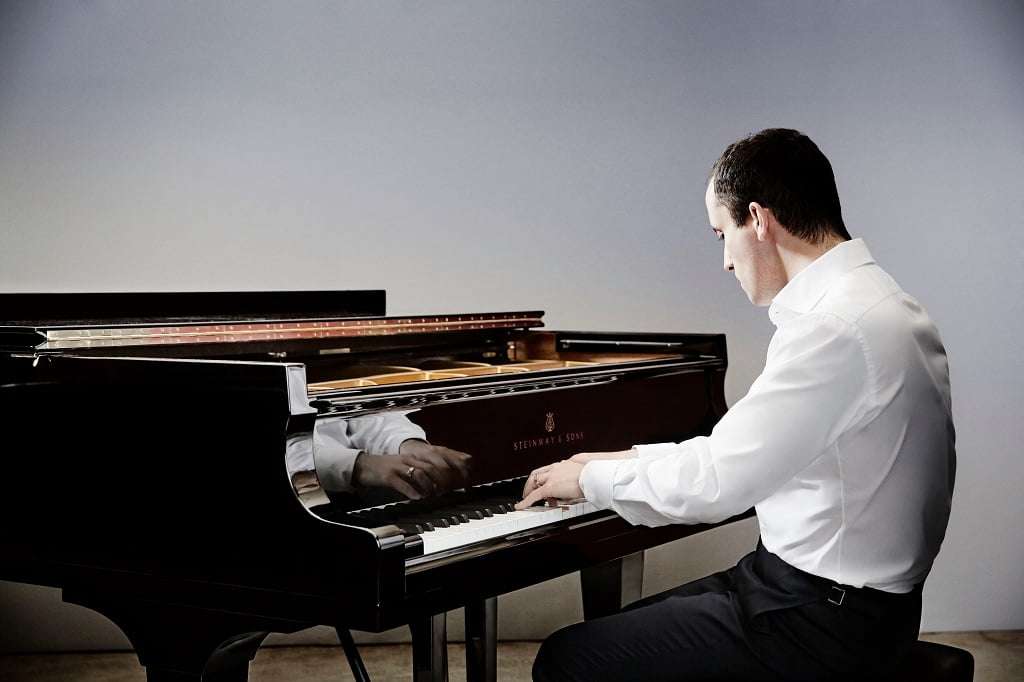 Igor Levit is a welcome visitor to London and is known for his willingness to tackle some of the peaks of the piano repertoire, and so he is drawn to the intellectual complexity of Busoni’s catalogue of works. So, it seems, is the Wigmore Hall audience, as this was a full house to help celebrate Busoni’s 150th-anniversary: would that evidence be shown elsewhere for recognising Busoni’s extensive output. The early Violin Concerto is receiving performances but there is nothing at the Proms nor much else around the country it seems.

Therefore a big thank-you to Levit for tackling Busoni’s best-known and most formidable solo piano work, Fantasia contrappuntistica. He did so, not unnaturally, in the context of Johann Sebastian Bach, whose music Busoni arranged extensively.

The puzzle was that Levit needed scores throughout this recital. not only was the music in front of him for reassurance but he seemed to really need it to perform the works, thus robbing, in my mind, a certain spontaneity.

Then there is the question of Levit’s approach to Bach. He takes a very stylised view with lots of pedal and differentiation between soft and loud, all impeccably placed it must be said. But Bach had no need of any of these features, nor indeed for the amount of rubato Levit used.

This is highly subjective, of course, and what Levit does with Bach is achieved with a deep sincerity and feeling for what lies behind the notes, and he played the short first half without a break for applause. To begin though with a curiosity, a Passacaglia by Johann Casper Kerll (1627-1693). Hearing this ambitious and virtuosic work made me wonder if Bach knew it. Perhaps. The four-bar bass is followed by forty Variations and Levit gave the work full rein in its fruitful invention.

Then to the great man himself, Bach, the ‘Ricercar a 3’ from The Musical Offering, played with great sensitivity, Levit alert to its improvisatory nature and requiring considerable dexterity. This was followed by Busoni’s exquisitely executed Fantasia after J. S. Bach (1909). Written on the death of his father Busoni creates an eloquent work based on a number of Bach pieces. Its structure can seem odd. Is there one? The numerous embellishments and reinventions of original Bach are thought-provoking at the very least, for this is a superb example of Busoni’s desire to acknowledge Bach’s genius and also his ability create something new.

The next logical step was to expand this relationship with something bigger; the Fantasia contrappuntistica, written the following year. Before that Levit played Contrapunctuses I, IV and XI from The Art of the Fugue in a way that was spellbinding.

Busoni’s magnum opus for solo piano is more commented on than played. It is a huge undertaking for performer and listener. In twelve sections, and based on the unfinished Contrapunctus XIV, which Busoni enlarges on for over half-an-hour of rigorous development.

Levit’s approach was much better suited to Busoni. Leaving Romanticism behind (best heard in his Violin Concerto from 1897), Busoni was drawn to “a new musical renaissance, reaching out to higher, purer realms that music had ever, as yet, inhabited” (Antony Beaumont). This inevitably drew him to Gregorian Chant and onwards to Bach and the Baroque era generally. Busoni’s renewal of what were becoming old-fashioned, the composer’s tools of polyphony and counterpoint, are exemplified in this big work and Levit made it connect closer to the human soul. Hence the cheering at the finish and there was a little encore, a Bach Chorale Prelude arranged Busoni.