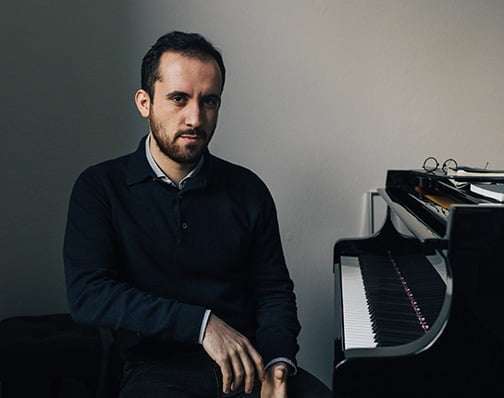 Igor Levit has achieved guru-like status in a relatively short time, and his reputation ensures faithful audiences willing to go the distance with him. Levit put that loyalty to the test with Frederic Rzewski’s Ages, an hour-long sequence of five movements, and again drawing attention to Levit’s predilection for pianistic monoliths, played with the music on an iPad and a ‘page-turner’ pressing the relevant button to scroll on.

The eighty-year-old Frederic Rzewski (American academic, pianist and composer, who lives in Brussels) and Levit are friends (see link to Variations, below) Ages, according to the composer’s gnomic programme note, reflects geological and historical ages, although that information and section titles such as ‘Robotic’, ‘Each note an age; glacial’ and ‘Too fast to last’ didn’t offer clarification. There are also a lot of noises-off – the keyboard lid slammed down with the sustaining pedal depressed, knockings on the piano case, whistles, groans and yelps from the pianist, and squawks, rattles and moos from various children’s toys – and to keep us guessing and interested, from the piano itself a battery of tremolandos, buzzing trills, hints of fugue, pounding bass-lines and eruptive chordal passages, all loosely tied together by plangent atonal scraps of melody, frequent recourse to the BACH motif, a brief snatch of the chorale ‘O sacred head’ and other suggestions of borrowed material. Despite Levit’s charismatic powers of communication Ages sagged badly. I felt increasingly distanced from an exclusive soundworld of epic note-spinning, and it was strange that music conceived for the piano did the instrument few favours. One man in the audience voted with his feet during the performance, and another gave it a standing ovation.

After such a work-out, the piano sounded in good nick for three of Mendelssohn’s Songs without Words, in which Levit’s considerations for balance, weight, touch and tone spoke for themselves. Concise and beautifully crafted, these pieces hint tantalisingly at substance. And they led without a break back into the world of large-scale expression. Ronald Stevenson (the Scottish musical polymath who died in 2015, aged eighty-seven) was a Marxist, a pacifist and a prolific composer. His best-known work is probably the eighty-minute Passacaglia on DSCH, and Levit has the Peter Grimes Fantasy in his repertoire.

Stevenson was also an epic transcriber and in 1987 turned his attention to the Adagio from Mahler’s Tenth Symphony. Piano arrangements of orchestral scores always sound like work in progress and remind of the odd serendipity that the piano’s sound is still the default voice of so much music. Levit honoured Stevenson’s skilfully regulated, non-percussive reduction of Mahler’s (and Deryck Cooke’s) music with an ear tuned more to exposing harmonic potency rather than attempting to reproduce instrumental colour. Trills and tremolandos inevitably come across as generically pianistic and therefore exaggerated, the Adagio’s signature portamento are impossible to replicate, Stevenson’s arrangement thankfully avoids those spread chords that try to grab every note going, and Levit was at his focused, time-suspending best in the extended sign-off. It was a long recital, there was no encore, and I left wondering what’s next for Levit … Sorabji???