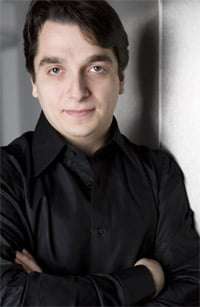 Igor Tchetuev was born in Sebastopol (Ukraine) in 1980 and won, aged 14, first prize in the Grand Prix of the International Vladimir Krainev Young Pianists Competition. In 1998 he won the First Prize Laureate at the Arthur Rubinstein International Piano Master Competition. His recordings for Naxos, Orfeo and Caro Mitis include works by the usual Romantics – Liszt, Schumann et al – as well as Schnittke and Beethoven. Regrettably Wigmore Hall was only half-full for this recital, but those who queue to hear better-known artists, missed something special.

Schumann’s Arabeske opened with soft tone and gentle phrasing, in the second section the added weight in the left-hand brought depth without sacrificing clarity, the return to the first theme was beautifully expressive and the short coda very slow and soulful. ‘Abegg’ Variations was exceptionally well characterised, quixotic and superbly voiced – the music took flight.

To programme all of Chopin’s Opus 10 Etudes in the first half of a recital is certainly adventurous, yet Tchetuev was equal to all of their demands. In No.1, the thirds were completely even, the Second was elfin at a slow tempo, the Third was slow and full of legato and subtle rubato and the Seventh was a real will-o’-the-wisp, the touch gorgeous. Occasionally, as in the Eighth, the left-hand seemed too refined, a greater sense of caprice was needed in the penultimate Study and the Eighth needed more playful bounce to the rhythm. But Tchetuev brought a genuine thrill – a sound that Neuhaus, Sofronitsky and Richter would have recognised. That indefinable ‘Russian’ quality in the mid-range, the crystalline treble and the defined bass, all combined with a very strong interpretative personality. In a word – glorious!

After the interval Liadov’s Glinka Variations proved rather pleasant if unmemorable, music that Tchetuev evidently likes; his combination of flowing lyricism and, when called for, real attack made the best of a dull work, although you did wonder if Pletnev in full idiosyncratic flow might have brought the work to even greater life. The Stravinsky however received the best performance I have heard of this fiendishly difficult showpiece. The first movement’s rhythm was ferocious, but the sense of dance was never lost and the second section was beautifully coloured with exquisite touch. Tchetuev took huge risks in the finale yet was almost note-perfect, bouncy, alive and the tone never deteriorated, even when producing a huge sound.

There were three encores, the last of which was Liadov’s once-popular Musical Snuffbox, here given with poise, wit and grace. Igor Tchetuev is an exceptional pianist and a true inheritor of the great Russian piano tradition. If you get the chance to hear him live, take it!