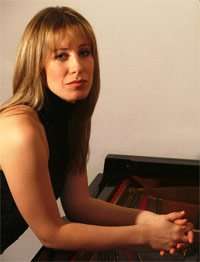 Ingrid Fliter is a BBC Radio 3 New Generation artist, and her first release on her contract for EMI Classics is a Chopin recital including the fourth Ballade, which closed this lunchtime concert.

The programme took the form of an interesting time-line, stretching from Haydn to Chopin via Beethoven. Haydn’s influence on the form of the sonata is often underestimated. Though Fliter played in a clean, slightly matter-of-fact manner, there were anticipations of Beethoven’s early sonatas to be found throughout. These were most notable in the florid ornamentation decorating the Adagio, enjoyed by Fliter but lacking humour. This was more in evidence in the finale, the pianist bringing out the juxtaposition of major and minor that runs throughout.

Beethoven’s penultimate sonata, despite its meditative beginning, was given a performance that to start with looked back towards the composer’s predecessors. Fliter’s definition of the many trills assigned to the right-hand was acutely clear, though some of the slower passages in the opening movement would have benefitted from more rubato and more grandeur. This was however found in a beautifully observed moment of stillness before the Fugue began, Fliter’s pedal-control also exemplary here as elsewhere. The Fugue gradually grew in power, the form under the grip of the pianist as she moved towards a most affirmative finish. While not the finished article, there were many fine things to be found in Fliter’s Beethoven, and greater exposure to these works are sure to hone an already-interesting and sensitive approach.

Her command of structure was again in evidence in both Chopin pieces, and an unfussy delivery of the virtuosic passages in the Scherzo contributed musically rather than for the purpose of display. The initial harmonic ambiguity was nicely portrayed through to the conviction of the whirlwind closing bars, itself immaculately performed.

These qualities typified another concentrated performance, this time of the Ballade, where Fliter offered less of a waltz-like approach than some renditions of the opening bars achieve. Another moment of stillness betrayed little of the stormy return to the home-key, where again Fliter’s definition of fast right-hand passages was completely secure.

Throughout the pianist found herself doing battle against a range of extraneous audience-noise and a couple of instances of flash-photography. Authorised or not, the ease with which these intrusions were cast aside was commendable.