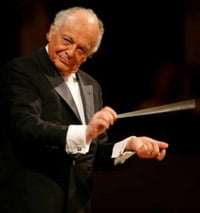 In the first of this season’s “Inside the Music” concerts, the New York Philharmonic presented a multimedia introduction to the last of Tchaikovsky’s symphonies, which also is the last of the composer’s works to be performed in the orchestra’s three-week-long “The Tchaikovsky Experience” festival. Ludovic Morlot led the orchestra’s accompaniment to the presentation by host Joseph Horowitz, author of “Classical Music in America: A History”, and actor Tom Hewitt. After the interval, Lorin Maazel led the orchestra in a performance of the symphony.

The programme began with a scene from Ken Russell’s 1970 film biography, “The Music Lovers” depicting the revulsion of Tchaikovsky (Richard Chamberlain) as his wife Antonina (Glenda Jackson) stripped off for him in a wildly rocking train compartment. The intensity of the scene was raised to monumental proportions by the substitution of the live performance by the Philharmonic, conducted by Ludovic Morlot, of music from the first movement of the ‘Pathétique’ that André Previn and the London Symphony Orchestra had recorded for the film’s soundtrack. This excerpt (with full frontal nudity) was presented, quipped host Joseph Horowitz, in order to be sure he had the audience’s full attention!

Horowitz provided a biographical and musical analysis of Tchaikovsky’s life and work, illustrating his talk with photographs, slides with excerpts from musical scores, and readings by actor Tom Hewitt of writings by and about the composer. Morlot and the orchestra performed musical excerpts from the ‘Pathétique’ – and also, in one of the more interesting portions of the presentation, from the Fourth Symphony, composed some 16 years previously. Because Tchaikovsky withheld from the public any programme for the Sixth Symphony, but had written in that vein about his Fourth Symphony, excerpts from the opening movement of that earlier work were used to illustrate how the composer embodied programmatic thoughts in his music. Horowitz posited that a similar process was at work in Tchaikovsky’s last composition, the Pathétique. He suggested that this work reflected Tchaikovsky’s weariness with life and preparedness for death, with its fourth movement virtually amounting to a suicide note. The ‘Pathétique’ is a “symphony of sighs”, as almost every theme in it has a sighing quality, Horowitz opined, and it is virtually unprecedented in the bleakness and emotional desolation of its conclusion, with the final fadeout being perhaps the saddest moment in the entire symphonic repertoire.

Horowitz also drew an interesting comparison between Tchaikovsky’s refusal to disclose any underlying programme for the ‘Pathétique’ Symphony and Gustav Mahler’s insistence, when conducting the New York Philharmonic in his First Symphony, that the orchestra’s concert programme not provide any analysis of the work. The annotator of the orchestra’s concert programmes, Henry Krehbiel, music critic for the New York Tribune, refrained from any discussion of the work, instead advising Philharmonic patrons of Mahler’s view that all writings about a composition, even those by musicians themselves, are “injurious to musical enjoyment.”

This concert offered an opportunity to put Mahler’s opinion to an immediate test. Was the audience inappropriately influenced by Horowitz’s discussion of Tchaikovsky’s life and his analysis of the music we were about to hear? We undoubtedly were influenced; Horowitz had us listening for passages that he and the orchestra had illustrated, and focusing our attention on the characterisations he had placed upon them. But it is less clear whether that influence sharpened our perception and appreciation of the music or, as Tchaikovsky and Mahler feared, interfered with it. Indeed, it may have affected audience members differently depending upon their musical sophistication and prior familiarity with the work. One thus might agree with Mahler that a composition is best heard for the first time without preconceptions, yet believe that analyses of the work – including insights into the composer’s programmatic intentions – can be helpful in deepening one’s understanding of it.

As Lorin Maazel led the orchestra in the complete ‘Pathétique’, there were many opportunities to consider the effect of the pre-interval presentation.The introductory section of the first movement, given Maazel’s rubato-laden phrasing, more than fitted the description “sighing”. But was this completely implicit in Tchaikovsky’s score, largely shaped by Maazel’s reading, or planted in our consciousness by Horowitz? I lean toward a combination of the first two theories: a performance that emphasised this aspect of what the composer wrote. Later in the opening movement, the Allegro vivo passage that had accompanied the clip from “The Music Lovers”, while still stormy, seemed to have less dramatic impact than when we were viewing the train ride, with sexual and psychological tensions so vividly portrayed. Our earlier hearing of this passage in the context of the film may well have detracted from our appreciation of the music when played as part of the symphony. Although Ken Russell found this music appropriate to accompany the scene in his film, Tchaikovsky, we can be sure, did not compose it to suggest a train ride.

Maazel was mindful of Tchaikovsky’s elaborately detailed tempo markings, yet by stretching out notes and phrases at times, and by extending pauses for dramatic effect, he conveyed his own deep emotional attachment to this music, which he has described as “like mother’s milk” to him, since his first teacher was Russian. The end result ran the gamut of life’s emotions, from love and joy at one extreme to anguish and tribulation at the other. It is the latter extreme, of course, that is strongly emphasised by Tchaikovsky’s orchestration, which relies extensively on the orchestra’s lowest instruments. The double basses, led by Eugene Levinson, performed admirably as did the bassoons, with principal Judith LeClair contributing outstanding solos throughout the work, and especially at the beginning of the symphony and in its bleak final movement.

The pre-performance discussion of the second movement was quite helpful to appreciation, as it was focused not so much on programmatic content as on analysing the music itself – specifically, the quirky rhythm of this “valse a cinq temps” (waltz in 5/4 time), in which it sometimes seems that two beats are followed by three, and at others that three beats are followed by two. Maazel took this movement at a brisk pace, and one could almost feel couples swirling around a ballroom floor.

In the third movement, which starts out feeling like a scherzo and ends as a stirring march, Maazel effectively managed the build-up of tension until the main theme was definitively stated in principal clarinet Stanley Drucker’s excellent solo. Pizzicato strings and woodwind-playing generally were standouts here. Tensions alternately built and relaxed as the march moved inexorably toward its shattering climax – one of the most exciting in the symphonic literature and to which Maazel and the Philharmonic gave its full due. However, its stark contrast with the heart-rending cry of despair that follows was dissipated somewhat by delaying the commencement of the finale for over half a minute – well after the inevitable applause for the march had subsided.

Maazel drew every bit of despair-laden emotion out of the final movement, conveying Tchaikovsky’s barren landscape most effectively. As the music reached a low point tonally, he doubled the stopped horns with trombones – also using horn stops – to produce a spine-tingling effect. The ensuing passage for trombones and tuba that slowed and softened (to ppppp) dramatically was breathtaking, as were the horns, winds and muted strings in the closing section of the movement, with the solo bassoon finally yielding to the cellos and double basses for the hushed, final fadeout – an unprecedented ending for a symphony. In this performance, as with so much of his work with this brilliant ensemble, Maazel conveyed masterfully his deeply felt and interesting vision of one of the most important works in the orchestral literature.