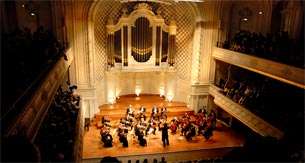 The first of this year’s concerts by the International Mahler Orchestra took place in the restored Salle Gaveau, a beautiful fin de siècle shoe-box hall much beloved by musicians (Martha Argerich gave a series of recitals there in 2004 and it has also played host to such as Kreisler, Landowska and Rudolf Serkin). The hall comfortably accommodates a medium-sized orchestra such as the IMO, here numbering some 47 players. Salle Gaveau is an ideal location for the orchestra both geographically (it is easily accessible from Champs-Elysées) and acoustically (warm and grateful on the ear) and the substantial audience included the legendary violinist, Ivry Gitlis.

Founded in 2006, the IMO is largely made up of young players at the outset of their careers and is drawn from many nationalities (twelve countries were represented at this concert), frequently augmented by older more established players. Around a nucleus of key players the orchestra expands and contracts according to programme and location. Yoel Gamzou, IMO’s founder and conductor, studied with Carlo Maria Giulini during his last two years of life and subsequently went on to win special recognition at last year’s International Mahler Competition in Bamberg, following which Marina Mahler, the composer’s grand-daughter, agreed to become the orchestra’s Honorary President.

Necessarily run on a shoestring, the orchestra’s players make huge sacrifices to take part in the series but there is an undoubted camaraderie and joie de vivre to IMO concerts, which is hugely encouraging for the future of music.

The overture to Johann Strauss II’s “Die Fledermaus” got the concert off to a fizzing start, not perhaps the tidiest of performances of this tricky piece but full of an authentically joyous esprit. 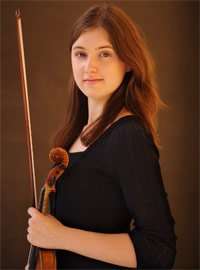 Prokofiev’s Violin Concerto No.1 was a particularly apt choice – the work received its premiere in Paris (October 1923) soon after the composer had moved there (conducted by Koussevitzky, no less). Its originally intended soloist, Bronislaw Huberman (and some other famous violinists) having flatly refused to learn the work, the premiere was assigned to the orchestra’s Concertmaster, Marcel Darrieux who, according to the composer, did quite well with it. On this occasion, IMO’s Co-Leader, the 18-year-old Henriette Fauth, played it more than quite well.

Frequently violinists play this music with the benefit of hindsight, bringing to it a weight and forcefulness more in keeping with Prokofiev’s Second Violin Concerto whereas there is an almost Mendelssohnian delicacy to much of the writing. This is music that emerges from near silence and, in the finale, recedes back to the shadows. Fauth brought a chaste beauty and welcome subtlety to its stratospheric reaches, emphasising the work’s purely musical as credentials; she was quite beautifully and sensitively accompanied, with notably fine solo wind and harp contributions. Speeds were consistently relaxed, possibly too much so in the central scherzo, but this was a hypnotic and subtle account. There was an almost Walton-like Mediterranean luxuriance to the finale, which stole in on tiptoe and which will linger in the mind.

Schubert’s ‘Great C major’ Symphony is the severest test for even the greatest conductors and orchestras. This account was spectacularly successful. The finale, taken at a real Allegro vivace, grabbed one by the throat and never let go, Gamzou and the orchestra bringing to it an unfettered energy and – crucially – generating the kind of driving onward momentum that is perhaps only possible to such a youthful group. By contrast, in the scherzo – also marked Allegro vivace – they found a quite different sort of vivacity. Rather than treating it as a Beethovenian Scherzo, there was a Ländler-like Austrian vigour, a lusty gemütlich quality, which served the music particularly well.

About the first movement there have to be some reservations. After a satisfyingly secure Introduction – notable for some fine horn playing – there was an almost indecently decisive spurt into the main Allegro, taken here without much hint of its qualifying ‘ma non troppo’ marking (which was reserved for the second theme). Never have I heard quite such a wide diversion of speeds employed in the main body of the movement and when so much had already been so fast, it certainly set up some problems when it came to the più moto coda. The Andante con moto second movement was slow but superbly sustained and graced with charismatic oboe and clarinet contributions from Hernando Escobar and Lionelle Wartelle: music-making of radiant conviction.