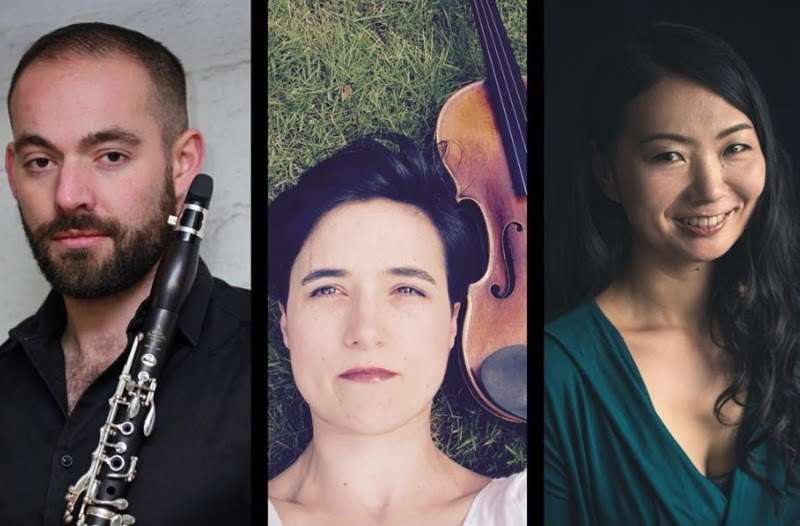 Sandwiched between three twentieth-century landmarks of the clarinet-trio repertory, Karl Fiorini’s Lamina and Timothy Salter’s Triptych stand at opposite ends of the stylistic spectrum – one attempting to break chains, nearer the “Revolution” theme of this year’s International Spring Orchestra Festival, the other retrospective and restricted.

The Fiorini (Lichtenstein 2002) was the composer’s first attempt towards developing new dimensions of structure and harmony evolved since in more-recent works. Nominally it acknowledges Bartókian arch form, while the “quasi-tenebrous” middle section – lento piano chords and disembodied octaves offsetting a haunting clarinet theme backlit by shuddering ponticello harmonics – marries ‘night music’ phantasms with Mortuis in Lingua Mortua wraiths lost in abysses of drunken delirium. Pondering, juxtaposing and mutating material, braiding mosaics of emotion, contribute to the general persona of the piece. The Aquilon Trio caught its intellectual and expressive dynamic with verve and conviction. Rhythms in the fast outer sections were crisp and lean, the tuttis – the various ‘Psycho’-chord sequences not least – attacked with a keen sense of well-rehearsed togetherness. The duet-cadenza closing the first section was especially satisfying – Massimo Di Trolio proving attentive to every nuance and hairpin, his first note coalescing magically out of nowhere, and Eulalie Charland placing her stopped-notes and glissandos with delicately judged timing and ‘air’.

Salter’s Triptych (2017) was written for the Aquilon Trio. “The differing timbres in a trio of a piano with two single-line instruments create a challenge in achieving any measure of homogeneity of texture, more so when the two single-line instruments differ themselves. However, of all the familiar wind instruments, the clarinet is most suited in its range of pitch, fullness of tone and wide dynamic capability to match the string instruments.” “Homogeneity of texture” is a clue to the character of this piece – in contrast to Fiorini’s search for characters in a room each with their own identity and destiny, occupying the same space, willing to embrace, but otherwise only rarely blending. Salter opens well (cyclically, he brings back the material in the Finale), but continues less interestingly. Every now and again I was reminded of the Arnold Cooke/Gordon Jacob days of post-war counter-Glock British Gebrauchsmusik, more arid than ardent – Hindemith in a faded suit. The 3/8 conclusion, in neoclassical invention style, generated some urgency but was otherwise sparse, wanting in decisiveness. Generally, the Aquilon’s method-before-signature account was efficient if a little colourless. In the metrically more fluid central movement, I wondered at the start if the “sustained delicate” right-hand piano quintuplets might not have benefitted from a warmer, more fluid violin counterpoint. The friction of agitated pizzicato triplets, hard-plucked, seemed marginally invasive.

Maiko Mori – who trained in London with Dmitri Alexeev and Andrew Ball – is a first-rate chamber player, her pianism, economically pedalled, alert to every slur and dot. She provides her colleagues with a quasi-orchestral backing, unfolding and ‘conducting’ textures with focussed clarity. Arguably her dynamic range isn’t of the broadest, she’s inclined occasionally to monochrome events, and her dramatic instincts can be reserved. But this is to quibble. As reliable, supportive players go, clean in technique and accuracy, holding the music together, she’s a positive asset. Within the Rimsky-Caucasian atmosphere of the Khachaturian – an early work but already hallmarked – she water-coloured a sensual tapestry of cameos and accompaniments, conjuring the ideal backcloth for Charland’s ‘Scheherazade’ and Di Trolio’s ‘Kalendar Prince’ paraphrases.

Repetitive Tango and stiffly ‘polite’ Devil apart, the clipped manner and secco verve of Stravinsky’s Soldier’s Tale arrangement made for an appealing centrepiece (even if it’ll never replace the original instrumentation). Bartók’s Contrasts, too, had classiness. Yet, ultimately, this was a reading more restrained than released, not so much abandoned as careful. What impacts about the composer’s 1940 recording with Goodman and Szigeti is its curvaceous liberty, bending of rhythm and agogics, and capacity to transform incidents and episodes into a larger ongoingly cohesive canvas. Comparatively, Di Trolio’s held-back way with the melismata before him wasn’t Goodman’s cross-over between Hungarian parlando and jazz-break. Charland’s closing cadenza was more brave than bravura. And Mori shied from the risk-taking and saltiness that previously had distinguished her Khachaturian and Fiorini. Generally I wanted more response and aura, a less cool temperature: provocation before propitiation.