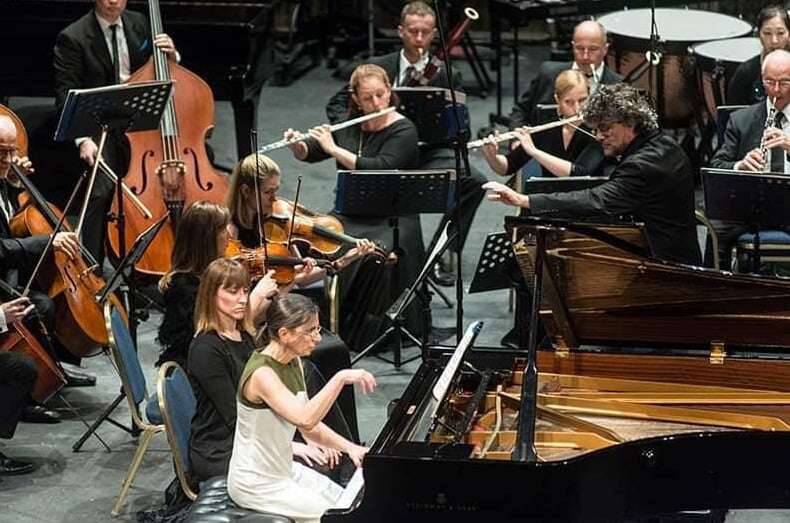 Given in the presence of Malta’s recently sworn-in new president, George Vella, this was a concert in three parts, the third generating the main interest.

Commissioned by the Valletta Cultural Agency, Karl Fiorini’s Four Miniatures are miniaturistic in the sense of Schoenberg’s Das Buch der hängenden Gärten, his arrangement of which opened the current Festival (April 26). In other words, weighty subject matter focussed in a concentrated, emotionally charged framework. The composer’s note tells us that the four songs “strive to capture Valletta, a city of echoing memories, where the scorching Mediterranean sun lashes out implacably at its buildings’ pigments and the worn-out, cracked ramparts that contain it; where the night hits the churches’ domes before devouring the nostalgic fabric of its cobbled and exhausted streets, caressed and trespassed by travellers, dwellers, peddlers, lovers old and newly-found alike.”

Valletta may be the professed resonance, but in fact these settings of nuanced, geographically unspecific texts by the ever-searching French poet and harpsichordist Sophie Charpentier (published in 2015) could be applicable to any old southern European or Mediterranean city: the walls and stones, the light, the heat of the darkness are exchangeable. Fiorini gives us a rarefied canvas, scored for woodwind octet (plus piccolo), two horns and trumpet, timpani, percussion and strings. The music grows in a cellular way, initially from a chattering, swelling pattern for five woodblocks and muted trumpet burgeoning into a tiny repetitive canonic figure for violins and violas – African-like in the understanding of Fiorini’s first teacher, Charles Camilleri.

Shades of Debussy and his orchestral writing in Pelléas et Mélisande surface magically, perfumed yet remote. Noticeably in the first song, “Echoing what was the colour of the stones”: “Que les mots seuls ne pouvaient ni transcrire ni rappeler” (That words alone can neither record nor recall); and in the intricately shuddering opening and closing of the third, “Insinuant ocher, orange, black fissures”. The second song, “The incandescent walls had holes”, starts with a lengthy instrumental paragraph in which muted and whispered dissonances cluster and harmonise stalactite-like in reverse of a Schumann fade-out. The crystalline expressivity of its tension closes the thirteen postlude bars, a lone voice tonalising the words “Jusqu’à confondre leur chair en amas cendrés” (literally “To confuse their flesh into ashes” but paraphrased in Adrian Scerri’s artistically free surtitled translation as “The burning to deny the violence that floats in colours”). The fourth number, “The sepia image fades little by little”, is energised and agitated, the final high B-flat “Retrouver” (Find) climaxing intentionally as more of a shriek than a pitch. 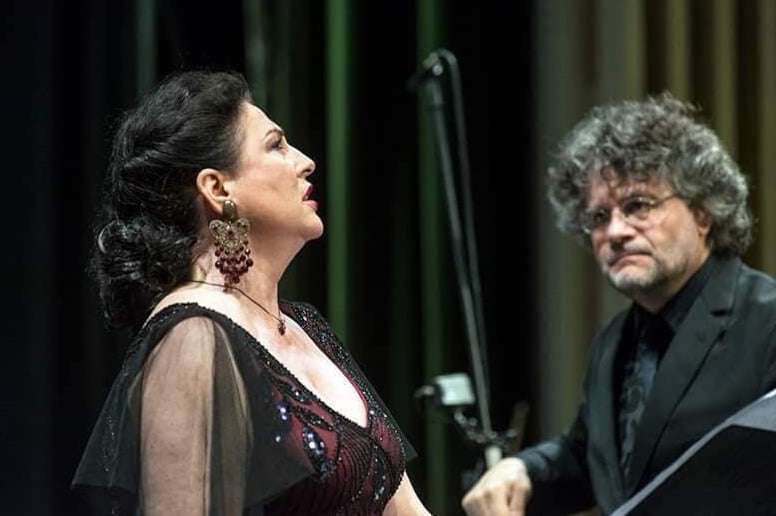 With limited rehearsal hours, the performance, perforce, was more sketchy than detailed. The Estonian Sinfonietta members, seemingly tired, were not always tidy or exact in their entries, and the trumpet had a troubled night – this is a work, a very fine one, inviting a visit to the recording studio to do its complexities and writing justice. That said, Brian Schembri, ever experienced, was characteristically strong in shaping structure and dramatising contrasts. The quasi ‘Debussy’ and ‘Schumann’ moments came off particularly well. It was Brigitte Peyré, though, who stole the occasion. A magnificent force of nature, a woman of the south (from Marseille), she cut an imperious, queenly figure, her presence and authority commanding the theatre. She soared effortlessly, her low register deeply grounded, her high end open and richly free of constriction. An experienced modernist, her pitching was well-nigh-faultless – we got the essence of the page. Cadencing the second song, she found wondrous tenderness, the beauty of it all caught in a gaze born of ancient time, a long, long gaze. If the tied notes of the first song didn’t quite sustain, covered by the orchestra, they astonished in the dress-rehearsal.

Peyré’s matured Mahler, sad and painful, took on a different dimension, taking us to Rückert, Zweig’s Vienna, to “a haven of eternal sleep”. Again, one had to marvel at the accuracy and musicality of her melodic shaping: trained as a pianist, she approached each interval and roulade with the articulation of an instrumentalist, the notes etched with precision. By the D-major ending (alluding to the Third Symphony) she had journeyed a road of searing womanhood and motherhood, of loss and grief intensely imparted, each German word mistily inflected. As festivals go this was no cheerful apotheosis but one singularly appropriate to Fiorini’s theme (as artistic director) of “Death and Maidens” – a poignant, lasting reminder of high European culture. Schembri drew moments of fine playing from the Estonians, timing the morendo chording of the final seven bars to lay before us a shroud for all eternity. Turning towards him, darkness descended, Peyré shared the indefinable. 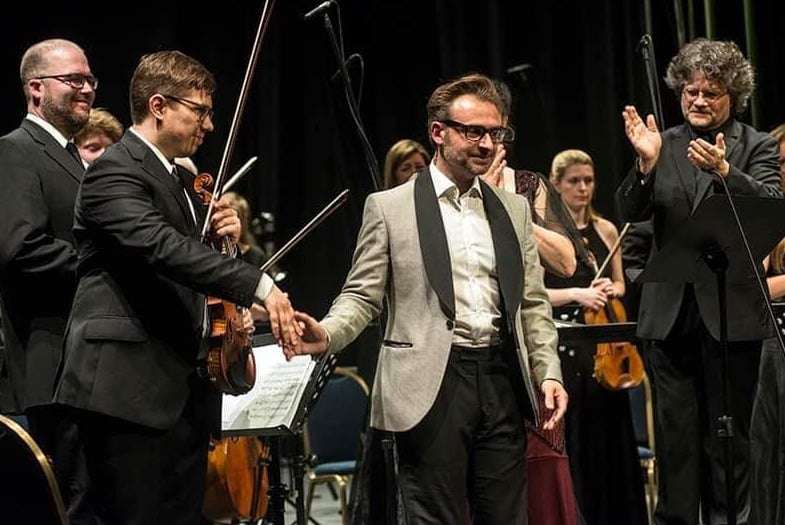 Best earlier was the first of Hindemith’s seven Kammermusik essays (in Fiorini’s perception paying oblique hommage to Bauhaus). Charlene Farrugia, obbligato piano, was crisp and agile, nothing conceivably beyond her powers as a solo and ensemble player. Realising the accordion part (which Hindemith edited from the original harmonium in 1952), Franko Božac, opposite her, right of stage, provided harmonic unity within the ensemble but his melodic doublings came over less clearly. The slow third movement – a quartet for flute, clarinet, bassoon and glockenspiel – especially pleased. Lucia Micallef, from toccata cadenza (some tough pages) to final secco bottom-A octave, tackled Poulenc’s curious Aubade of 1929 with customary determination. But this is an oddly disjunct eight-movement “choreographic concerto” hard to hold together. Despite Schembri’s Parisian-based grasp of the style, the gapping between sections and the Estonian Sinfonietta’s evident discomfort with the score, unfamiliarity even, made for a somewhat irregular overview. Poulenc wanted his music to be “loved”. I didn’t get too much of that.

So to Daphne Delicata – her third successive evening appearance at this year’s Festival. Ravel’s Sonatine is tricky and deceptive. From her poise (the more so given the pressure and dignitaries present) you wouldn’t have guessed it. Her fingers have all the requisite lightness and fluidity of action. Increasingly responsive to voicings, she knows how to differentiate (and tint) textures, making the most of melody and harmony. She has a classical feeling for architecture, witness the first movement. And she knows how to get the best out of an instrument. A considered, civilised reading never forced for a moment, the bass moments glowed with a rich patina, the treble glittered with softly honed Mozartean refinement (not easy to achieve on a neglected Steinway wont to be sonically unkind). Daphne has been studying with the Russian Elena Nesterenko, a former Moscow disciple of Evgeny Mogilevsky. Next September she goes to the Yehudi Menuhin School. We wish her well.