Into the Hoods – A London Fairytale 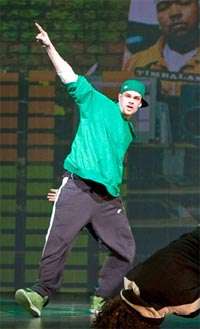 First seen in February 2006 over the Thames at the Peacock Theatre (for just two performances) and then a hit at the Edinburgh Fringe in both 2006 (when I first saw it) and 2007, Zoonation’s hip-hop fairytale “Into the Hoods” arrives back in London for a Christmas season at the Southbank Centre’s Queen Elizabeth Hall. There was also a five-month West-End stint over at the Novello Theatre last year.

Since my first viewing the show has developed, although some of the fairytales updating seem rather more muddled than I had originally thought. It is very loosely based on Stephen Sondheim and James Lapine’s “Into the Woods” (that show’s title is now referenced only once in the programme), in which a number of fairytales are entangled within a new tale where a witch threatens the life of her neighbour, the miller and his wife’s child, if they don’t collect various fairytale-orientated objects – a cow as white as snow, from “Jack and the Beanstalk”, a hooded-cloak as red as blood from “Little Red Riding Hood, and so on”. It seems over at the end of the first half, all the tales complete – Cinderella and Rapunzel have their princes, Jack his treasure, Little Red Riding Hood the defeat of the wolf, and the miller and his wife their child – but disaster strikes when the giant’s wife comes after all of them for the death of her husband. 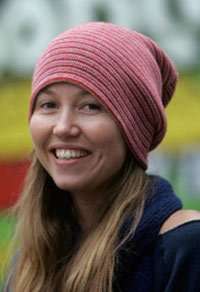 In “Into the Hoods”, Kate Prince concentrates on finding a sink-estate updating of the four fairytales. Not surprisingly singer Lil Red (Sacha Chang) is dressed in Red, living in the tower block on Ruff Endz Estate, while Spinderella (Teneisha Bonner), a budding DJ, is in yellow with Ugly stepmom (Shaun Niles) and the Ugly sisters (Jeffrey Felicisimo and Kieron Providence) all in shocking pink; Prince (Roger Davies) in orange; MC Rap-en-Zel (Rhimes Lecointe) in blue; budding record manager Wolf (Dre Oporia) in purple and Rowen Hawkins’s Jaxx, obviously in the basement, in green. The ensemble dancers are in black trackies with white piping and the various characters perform quick-change miracles to become members of the ensemble when needed.

Apart from the recorded narration (Josh Cohen) and the occasional specially interpolated vocals in the soundtrack, the narrative is propelled by mime and high-energy dancing, great to watch, with rarely a let-up over the 80-minute running span. The witch from “Into the Woods” is here the landlord of the tower block (Frank Wilson and Hakeem Onibudo), while the miller and his wife have become a pair of runaway children (Liam Francis and either Lily Field or Rachelle Ragassa), who are charged with getting for the landlord an “iPod as white as milk, a top as red as blood, a shoe as gold as bling and hair as yellow as corn” for his daughter’s 18th-birthday – his daughter being Rap-en-Zel.

Here the confusions begin to mount. Instead of the two Princes in “Into the Woods” (with their act two showstopper ‘Agony’, as once married, they immediately start eying up other girls), here we only have one Prince, two-timing both Spinderella and Rap-en-Zel. Others of the tales transfer better. Lil Red visits an Old Age People’s Home to see her Grandma (or Wolf disguised as her, who gets her to sign his record contract, only favourable to him), where there’s a hilarious scene of the elderly inmates swinging their hips to the music. Meanwhile Jaxx, threatened with eviction exchanges his iPod for drugs from the Giant (Jeffrey Felicisimo) who lives in the Penthouse, then when the drugs get stolen he has to do battle with the Giant in true Kung Fu fashion, including some great set-pieces in slow-motion.

The show includes absolutely none of Sondheim’s music, but searches far and wide for appropriate, rhythm-heavy pieces, which range from Jitterbug to Hip-Hop. There’s some mighty fine break-dancing on display, and a welter of energetic moves that leave the audience breathless let alone the performers. The video projections (Felix Harrison) and great animations (Maxwell Oginni, Kingbee Animation and Olly Montagu, after Ikenna Mokwe’s originals) add another dimension, and often the interaction between them are brilliantly done, such as when cartoon Spinderella comes down the steps from her decks to seamlessly appear in real-life through the screen to dance with Prince, before losing her gold trainer.

And while the fact that there’s only one Prince between two girls, and why the landlord would need hair as yellow as corn cut-off his daughter’s head is never explained, there’s a neat coda, five years on, including an effortlessly choreographed move for Jaxx and Lil Red from their wedding into bed.

“Into the Hoods” got a rousing reception at this performance, and deservedly so, the packed Queen Elizabeth Hall – a venue ideal for a show (and Zoonation workshops) that will enliven the post-festive slump as it has no sightline difficulties – full of families.