Music and lyrics by Stephen Sondheim, book by James Lapine 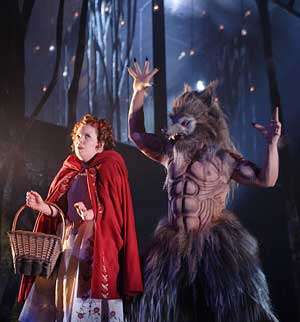 Since it first appeared in London in 1990, I have always thought that Stephen Sondheim and James Lapine’s “Into the Woods” would make a brilliant show for Christmas. This instead of the usual pantomime fare which usually involves nothing more than a lot of hoary old gags, chubby comedians appallingly clad as washerwomen and athletic juvenile-leads cross-dressing while singing to pathetic pop songs. There are exceptions such as the original scripts devised for such London fringe venues as Hackney Empire and the Theatre Royal Stratford East and care and attention is usually lavished on such seasonal delights by the Royal Shakespeare Company, The Old Vic and the Barbican Centre.

However, no theatre up and down the land could ever hope to come up with anything to improve on “Into the Woods” and the all-too-brief run of the Royal Opera’s new production by Will Tuckett is good enough to stay in the company’s repertoire, particularly as an annual Christmas treat. It’s a comic-tragic take on the fairytales that are plundered for the pantomime season but far better and more imaginative than anybody else but Sondheim and Lapine could have produced.

The original London production of “Into the Woods” was at the Phoenix Theatre and the first revival was at the tiny Donmar Warehouse. In terms of space, the Linbury Studio Theatre lies somewhere between those two venues and seems ideal for Will Tuckett’s production and in particular Lez Brotherston’s delightful and, yes, magical settings.

There are four stories taking place in the Sondheim/Lapine narrative of “Into the Woods”, which involve such familiar characters as Cinderella, Little Red Riding Hood, Jack and the Beanstalk and that long-haired layabout Rapunzel. Interwoven among these is a story about a baker and his wife, a childless couple who have had a spell cast on them by a neighbouring witch because the baker’s parents stole her magic beans. All the characters set out on a journey into the woods where exciting and frightening, unusual and enchanting things happen.

They all have an objective in mind: Cinderella wants to go to the King’s festival in a pair of golden shoes, Little Red Riding Hood is delivering food and wine to her grandmother, Jack is off to sell his pet cow, and Rapunzel is singing and combing her hair in a tall tower, awaiting her release. The baker and his wife can have their spell removed if they manage to retrieve certain items for the witch. As luck would have it, the witch wants a gold slipper, a red cape, a milky white cow and a lock of golden hair. The first half of the show is the quest for all these items and the often-comic incidents that occur during the journey…

The second half is much darker as everything begins to go wrong. Jack sells the cows for beans but they grow into a beanstalk, which he climbs, only to find a giant with a magic hen and a harp that plays itself. When the giant falls to earth, the characters are threatened with extinction. The voice of sanity through all this is the Narrator, who keeps his audience abreast of the facts. The stories are very cleverly interwoven and, on account of Sondheim and Lapine’s skill, we believe every word and situation. 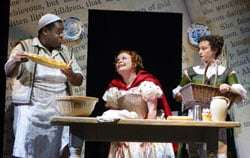 Of course there is also the great Sondheim score, probably his best after “Sweeney Todd” and the pleasure comes not only from the music itself but because it sounds typically Sondheimian. Not only are the settings magical but the music also casts a definite spell over actors and audience alike, whether it be the Wolf introducing himself to Little Red Riding Hood in ‘Hello, little girl’ or Red Riding Hood’s own admission of self-awareness in ‘I Know Things Now’ (“I should have heeded / Her advice … But he seemed so nice”). ‘Agony’ is both sad and funny as the two Princes discuss their amours (“Agony! / Far more painful than yours / When you know she would go with you / If there only were doors”). And ‘Ever after’ is less than happy as it sums up the search: “You go into the woods / Where nothing’s clear / Where witches, ghosts and wolves appear / Into the woods and through the fear / You have to take the journey.”

Towards the end of the piece, the mood darkens as it deals with the loss of loved ones and the fear of growing up and growing old, the making of the right or the wrong decisions but it concludes that ultimately no-one is alone. After all the fun and fairytale antics the message hits home most movingly.

The cast is terrific, from the hungry but endearingly no-nonsense Red Riding Hood of Suzanne Toase, the sensible but sensitive Cinderella of Gillian Kirkpatrick, the simpleton ways of Peter Caulfield’s Jack and his nagging but loving shrew of a Mother played by Anne Reid, to Clive Rowe’s upstanding wholesome Baker, Anna Francolini as his pushy Wife, and the down-to-earth Narrator of Gary Waldhorn.

Keeping all these on their toes is Beverley Klein’s superb characterisation of the Witch who weaves her own brand of magic, making her a real spitfire of the spellbinding sisterhood. The band under James Holmes delivers Sondheim’s score with its own kind of magic and Will Tuckett’s deft and effortlessly fluid production is the cherry on the top of a very rich confection indeed. Let’s hope it comes back for Christmas.