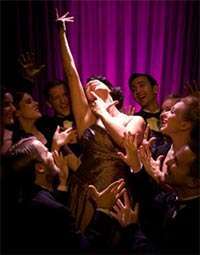 The initial idea for Call Me Madam came in 1949 when singer and actress Ethel Merman and her family were on holiday in Colorado with writer Howard Lindsay and his wife. Lindsay was reading about Washington socialite Perle Mesta who had been appointed Ambassador to Luxembourg, a good subject for a typically American performer like Merman. “Miss Showbusiness” had never heard of Mesta but went along with the idea. Lindsay and his writing-partner Russel Crouse approached Irving Berlin to write the songs. With Merman on board he hoped to repeat the success of his 1946 show Annie Get Your Gun (also with Merman), after which Miss Liberty had flopped.

If the subject-matter doesn’t sound too promising with a plot involving the installation of oil millionairess Mrs Sally Adams in the role of Ambassador to the European Duchy of Lichtenburg (a cross between Liechtenstein and Luxembourg perhaps), with Merman as the star, the show became a huge hit. It satirised the way the USA enjoyed giving money to foreign countries, whether they wanted it or not. Knowing nothing about politics, diplomacy or foreign affairs, Sally Adams is mainly out for a good time. She falls for Cosmo Constantine, Lichtenburg’s Foreign Minister, while her press attaché, Kenneth Gibson, takes a shine to the country’s Princess Maria. The two stories compete for attention against a background of satire set at the time of Harry S. Truman and Dwight Eisenhower. 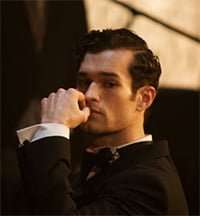 Berlin’s score is packed with some of his best songs and ballads. ‘The hostess with the mostes’’ introduces us to Sally Adams, “the chosen party giver of the White House clientele”. ‘Can you use any money today?’ makes the offering of international monetary support sound like a matter of borrowing a dollar or two. Old-fashioned romance is celebrated in ‘Marrying for love’, sung by Cosmo, and expressing a sentimental rather than a business relationship as he looks for the woman in Sally rather than her chequebook. A similar emotion is found in ‘The best thing for you (would be me)’, a duet by Sally and Cosmo as they come to realise their mutual love. The other pair of lovers, Kenneth and Princess Maria, discover their feelings in ‘It’s a lovely day today’. Perhaps the most memorable number is ‘You’re just in love’, written as a last-minute addition by Berlin at the request of Merman who wanted a duet with her attaché. It has two tunes written in counterpoint – ‘I hear singing and there’s no one there’ with ‘You don’t need analysing’.

With George Abbott directing and Jerome Robbins doing the choreography, Call Me Madam opened on Broadway in October 1950 and ran for over six-hundred performances. It won four Tony Awards. In London it notched up nearly five-hundred performances with Billie Worth in Merman’s role. It was revived in London in the early 1980s with Noelle Gordon, of Crossroads fame, for a far shorter run. It was revived with Tyne Daly in a concert version in New York in 1995 and staged at the Paper Mill Playhouse in New Jersey with Leslie Uggams in 1996, while London has lately seen some fringe revivals. The 1953 film version with Merman, George Sanders, Donald O’Connor and Vera-Ellen was another hit, winning an Oscar for Alfred Newman’s scoring, while Merman won a Golden Globe.

Although it was originally a stage production with some twenty speaking roles and nearly thirty chorus members, Call Me Madam sits well in the tiny Union Theatre space. In Lucy Williamson the show has a great personality as Sally Adams. She has to be bright, brash and breezy as she knocks down anyone or anything that crosses her path. Williamson certainly gives Berlin’s tuneful score and witty lyrics a run for their money.

Gavin Kerr is suitably upstanding as Cosmo, a character of cast-iron rigidity whom only Sally can unbend. As young lovers Kenneth and Maria, Leo Miles and Natalie Lipin create a credible chemistry between them. Blake J. Askew, Ralph Birtwell and Jay Worthy play three US Senators on the make, while their song (sometimes dropped from recent productions) ‘They like Ike’ sets the piece definitively in the early-1950s. When the song became President Eisenhower’s campaign number, US radio stations refused to play it, seeing it as too partisan.

There is plenty for the Union ensemble to do with some energetic production numbers, most notably ‘Something to dance about’, complete with a tantalisingly tireless tap routine. Mark Smith’s choreography is playful but exacting and the company perform with panache and catchy zestfulness. With just one keyboard Musical Director Ross Leadbeater provides more than adequate support for Berlin’s timeless tunes. Chris de Wilde’s chic designs are lit with elegance by Jon Winn. Michael Strassen, now a Union veteran, stages the production with pace and tact – something to dance about and something to sing about.