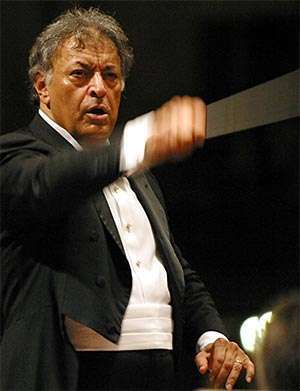 Few pieces engender as much debate as Bruckner’s Eighth Symphony, with each of its editions having fierce advocates and falling into and out of favor over the course of the Symphony’s century-plus history. Zubin Mehta, Music Director for Life of the Israel Philharmonic Orchestra, prefers Leopold Nowak’s publication of the 1890 revised version, and he and the IPO gave it a powerful reading in the Knight Concert Hall at Miami’s Adrienne Arsht Performing Arts Center.

As is the Orchestra’s custom during its current American tour, the performance began with stirring renditions of the American and Israeli national anthems. After a brief pause to allow the audience (and a few latecomers) to settle into their seats, Mehta returned to conduct Bruckner’s monumental work from memory. This was my first visit to this Hall, and I was immediately impressed with the vibrancy of its acoustics. Each section of the orchestra came through with marvelous clarity across a wide dynamic range, and their sounds blended together admirably into a well-balanced whole.

This Symphony has long been a mainstay of Mehta’s repertoire, and he has conducted it with the IPO on many occasions. This performance reflected both his overarching vision of the work and his attention to detail throughout. His tempos were well considered, the “moderato” qualification given due attention in the opening Allegro and then the scherzo. The Adagio, as marked, was solemnly slow without dragging and the finale was not taken too quickly. Mehta conducted with a steady hand, cueing without resorting to outsized gestures and exuding calm control, to which the players responded ably.

The low strings gave the opening measures appropriate gravitas, and by the time the work’s initial crescendo reached its peak, virtually the entire orchestra had contributed to a massive sound. The second subject, in a typically Brucknerian rhythm that pervades much of the Allegro, offered a pleasing contrast, becoming even richer upon its later return. The timpani signaled the movement’s impending conclusion by its transition from strident accompaniment of the trumpets to soft beats that ushered in gentle strings and winds, with a lovely clarinet line before the abrupt, anticlimactic ending. The scherzo, true to that designation, sounded almost like laughter, led by rollicking horns, and in the contrasting trio the harps delicately brought the music to a brief hiatus at the midpoint and accompanied the gentle flute melody that ended it.

Mehta spun out the Adagio wonderfully in stages, developing thematic material with increased complexity and depth of emotion. The grand climax, with cymbal clashes and a triangle, is the watershed of the entire Symphony, matched only by the ultimate coda. Powerful brass set a tone of splendor at the outset of the finale, aided by the timpani, which later softly introduced a well-played fugal passage on the strings and then the winds, with the Wagner tubas providing support. There were many adventures along the way, but Mehta steered sure-handedly to the spectacular conclusion.

This performance proved an excellent showcase for the IPO. The strings had a predominantly dusky sound that was just right, but they also were effective in upper registers from time to time. The cello section was richly sonorous, and concertmaster Ilya Konovalov contributed several fine solos. Even more impressive was the brass. James Madison Cox’s horn solos were gorgeous, and the entire section, some players doubling on Wagner tubas, made a glorious sound. Trumpets added regal fanfares and flourishes, trombones and tubas providing harmonic underpinnings. Dan Moshayev’s nuanced playing of Bruckner’s varied rhythmic timpani patterns added emphasis to overpowering moments and created a mysterious atmosphere in many transitional passages. Bruckner added a third player to each of the usual woodwind pairs, and the resulting sound was penetrating enough to hold its own against the brass and strings. Solos by Yossi Arnheim on flute and Bruce Weinstein on oboe were particular standouts. The two harps (Bruckner asks for three) were delicate as a music box in the trio, and the two percussionists (“They also serve who only stand and wait”) did their part in the Adagio’s climax. All in all, this was an engrossing performance.