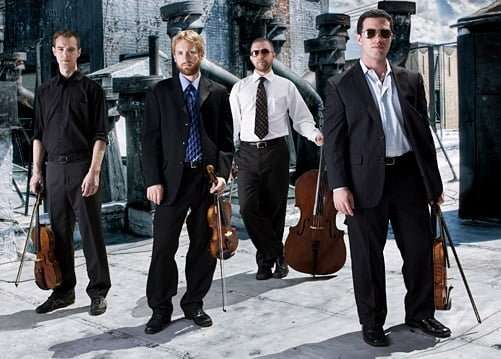 In recent years the JACK Quartet has established itself among the leading ensembles which focuses intensively on post-war and contemporary music and, if its repertoire embodies elements drawn from the very different domains of the Arditti and Kronos Quartets, this only reflects the influence of both these groups on their successor. This Wigmore Hall recital featured three works which, at around 22 minutes each, made for a programme as contrasted as it was balanced – with two new pieces preceding an undoubted classic.

Some seventeen years after his first such work, Georg Friedrich Haas has amassed a string-quartet output as ranks among the most substantial of present-day composers. His Eighth Quartet (2014) is both typical in its intrinsic concerns yet also distinctive in its focussing upon salient factors. Essentially this single-movement piece is a constantly evolving study in microtones and, as a consequence, harmonic spectra – taking in what Haas describes as a “cantus infirmus” that engenders the main climax, then latterly a section whose intricacy gradually reduces towards the sublimated ‘setting’ of a Hölderlin poem (An die Parzen) in purely rhythmic and spectral terms. Paralleling the initial fugal intensification, the closing minutes duly effect an unforced winding down of activity until only the gestural motions of the players remain.

The JACK musicians conveyed the music’s inherent incremental transformations with absolute assurance, and seemed no less inside the very different idiom of the Third Quartet (2013) by Simon Holt. This is the final instalment (though placed third) in a set of six pieces with the collective title Terrain, and whose components progressively descend from string sextet to solo viola. Of the present work’s six movements, the opening ‘Matins’ provides a wealth of subtle details and textures such as are heard at their most extreme in the ensuing ‘Wu Ping’s Nail House’ then at their most rarefied in the final ‘Night’s Mantle Descends’. The intervening three movements, if drawing no less directly on these motifs, feel almost discursive in context, though the overall logic and continuity were (almost) never in doubt.

Logic and continuity are fundamental to the Third Quartet (1971) of Elliott Carter, the more so when its expressive trajectory is surely still the most confrontational of any in the string-quartet literature. With its division into two duos (first violin and cello, second violin and viola), whose respective four and six movements emerge in constantly changing combinations, this is a work whose contrasts are never tentative and often explosive – yet the underlying follow-through is precisely gauged from an initial dispersal of activity, via passages alternately sombre and capricious, to a charged culmination and rapid surge to the febrile close. Maybe this latter was lacking in the last degree of panache, but the JACK players (its duos sitting a little too far apart?) had the measure of what remains one of the toughest challenges any string quartet is likely to face.

Overall, then, this was an assured recital by an ensemble as looks set to take the more radical idiom of quartet-writing confidently into the future. Hopefully, too, it will make it onto disc as a follow-up to the JACK’s incendiary first release on Wigmore’s Hall’s own label.