Wigmore Hall buzzed with excitement in anticipation of the second visit of Jakub Józef Orliński, the breakdancing Polish countertenor, who burst onto the British opera scene at Glyndebourne this summer. His youthful energy and relaxed attitude was evident from the start as he chatted to the audience about his wardrobe choice: a vibrant green designer suit. His repertoire choices fell firmly in the baroque, and the programme consisted of Venetian operatic rarities, recitatives and da capo arias of introspection and anguished love, which form key dramatic moments within each work. The intensity was leavened by brief instrumental sinfonias from Orliński’s backing, Il Pomo d’Oro, led by Francesco Corti. 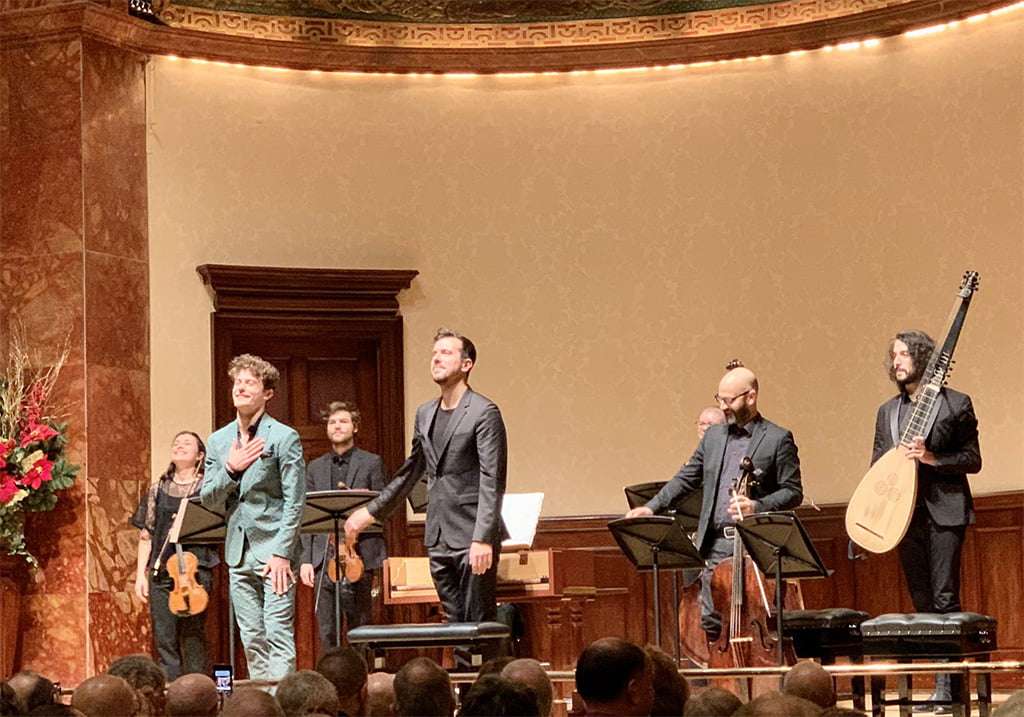 ‘Erme e solinghe … Lucidissima face’ from Cavalli’s La Calisto opened the evening, comparing the unearthly beauty of the Moon to the lover, Endymion’s, flaming heart. As the recitative unfolded into the aria, Orliński’s lovely soft edged alto enveloped the hall. The voice hovered and seemed to emanate from another place, only in fortissimo passages did the trajectory seem obvious. His smooth legato caressed the air in Bononcini’s ‘Infelice mia costanza’, whereas the trills and ornaments in Predieri’s ‘Finchè salvo è l’amor suo’ were a little tight. Sentiment ruled in content, and the first half ended with Handel’s ‘Ah! Stigie larve!’, a more substantial and emotionally complex set piece from his opera Orlando. Il Pomo d’Oro’s vivid and attacking style injected pace and colour throughout, but threatened to overwhelm the singer on more than one occasion.

The second half brought more delights, which can all be sampled on Orliński’s second solo CD, Facce d’Amore. Highlights included an aria by Hasse, from his Orfeo of 1736, the most modern piece in the recital, and a show-stopping aria by Orlandini, ‘Che m’ami ti prega’, from Nerone, which displayed the plangent depths as well as the heights of Orliński’s prodigious range.

Fans from all over Europe were delighted with a full half-hour of encores from this charismatic performer. Four arias, including his trademark ‘Alla gente a Dio diletta’ by Nicola Fago, and Vivaldi’s ‘Vedro con mio diletto’; familiar repertoire given with increased ease, beauty and power.