MacMillan
Miserere
Tallis
Why fum’th in fight
Vaughan Williams
Fantasia on a Theme by Thomas Tallis
MacMillan
Stabat Mater [commissioned by the Genesis Foundation in association with The Sixteen: world premiere] 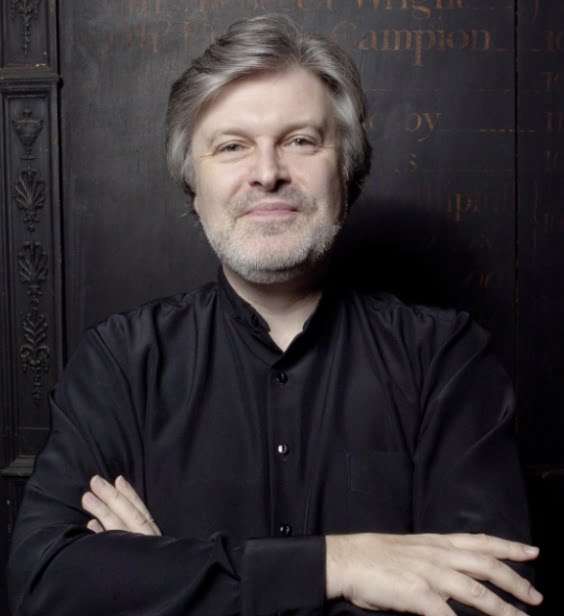 Two concerts in one day including music by Sir James MacMillan provided the opportunity to catch up with two recent pieces, and also his increasingly popular Miserere, first performed by The Sixteen in Antwerp in 2009.

At St Giles’s, Birmingham-based Ex Cathedra gave the London premiere of Seven Angels – which it commissioned in 2014 and first-performed in January last year in the local Town Hall. Impetus for the work grew from the idea of developing Elgar’s unfulfilled vision of a trilogy of Oratorios that would have seen The Apostles and The Kingdom complemented by The Last Judgement.

In Seven Angels MacMillan sets lengthy passages from the Book of Revelation, with specific reference to the angels whose trumpet-blasts herald a series of apocalyptic scenes. From this cinematic narrative he fashions a forty-minute canvas, compelling for its ambition and dramatic scope. In part this derives from the imaginative use of a divided chorus (with internal soloists, here adding individual timbres) supported by harp, cello, two trumpets (doubling on shofars) and percussion: a sometimes clangourous combination that reveals startling sonorities, not least a dance-like passage for harp, cello and tubular bells. The shofars (with their disconcertingly approximate pitches) made a biblical-sounding contribution, their inclusion presumably prompted by Elgar’s usage in The Apostles. 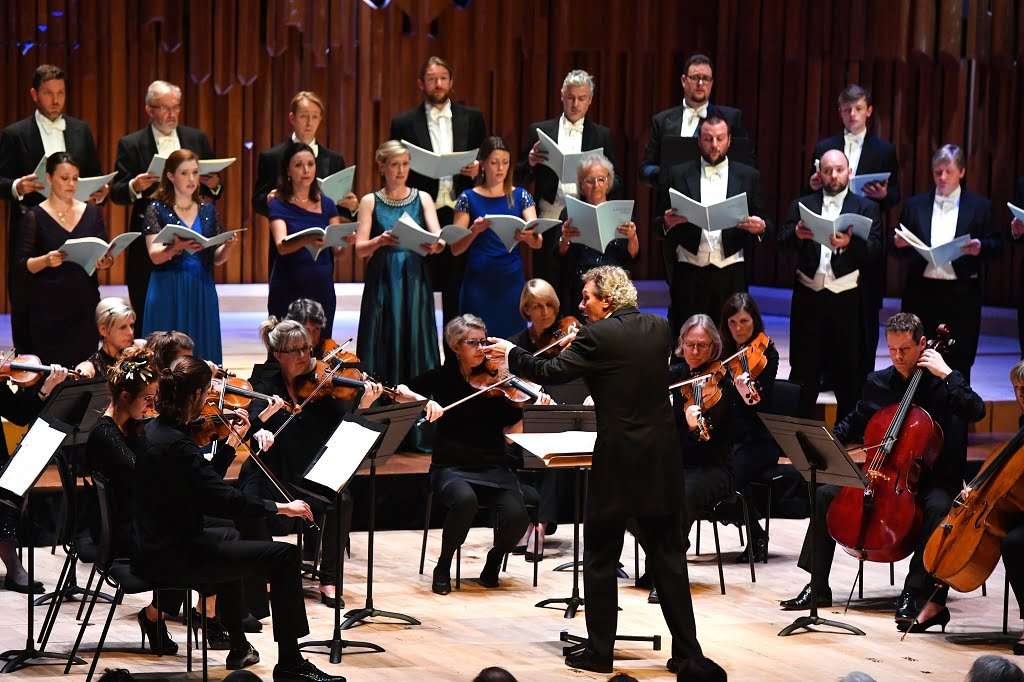 MacMillan’s choral writing is no less resourceful and, in addition to its considerable demands, use is made of alternative techniques, including Sprechstimme, humming and whistling, all making for an impressively varied palette. That said it was a relief ten minutes or so in to hear a straightforward (and beautifully sung) pianissimo passage conveying the crying of an eagle after the fourth angel has darkened the sky.

Onto this remarkably vivid text MacMillan provides an astonishing profusion of ideas – almost too much for a single hearing – their theatrically always in-keeping with the intensity of the subject. Conveying the vision of a new Heaven and Earth, Jeffrey Skidmore drew from the performers a gloriously fervent response and in so doing proclaimed Seven Angels as powerful music.

The afternoon opened with Aaron Copland’s In the Beginning (1947) – a tour de force for mezzo-soprano and chorus setting words from the Book of Genesis. Martha McLorinan was an assured soloist, agile when required and impressive even when strident. Ex Cathedra was on superb form, pitch-perfect in Copland’s melodic angularities and rhythmically buoyant in recitations. In a piece that demands great flexibility, colour and a wide dynamic range Ex Cathedra was the perfect choice.

The evening event, with The Sixteen and Britten Sinfonia in the Barbican Hall, began with MacMillan’s a cappella setting of Miserere (Psalm 51) in which his creatively deployed choral textures and harmonic juxtapositions recall the great masters of the Baroque; two passages drawing on the plainchant Allegri used ravished the ear, one supported by sumptuous harmonies, the other resolving onto a pedal above which soloists wove elaborate melismas. Harry Christophers and his choir were natural executors for the music’s confessional tone. Blend and intonation were impeccable and the final cadence magically achieved – as if all sins were forgiven with the arrival of a bright E-major chord. 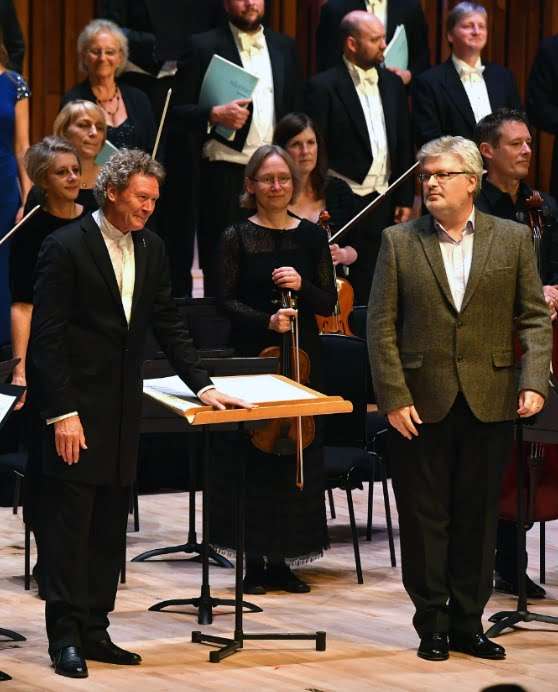 From a penitential psalm to one of raging, Thomas Tallis’s metrical setting of Psalm 2 (Why fum’th in fight) provided the link to Vaughan Williams’s Tallis Fantasia, which Meurig Bowen believes might have prompted Herbert Brewer after its Gloucester premiere to declare it “a queer, mad work by an odd fellow from Chelsea.” There was nothing mad about this reading in which the Britten Sinfonia (violinists and viola-players standing) was exemplary. Christophers produced a fluid account, effortlessly shaping the music and energising the players with swirls, flicks and encouraging smiles that never impeded the music’s ebb and flow.

The main focus was MacMillan’s Stabat Mater, whose boyhood experience of the text coloured his perception of the crucifixion’s beauty and sadness. His programme note also drew attention to the great settings, such as by Pergolesi, Rossini and Szymanowski, and it’s curious that this medieval poem has attracted so few British composers, only those by Lennox Berkeley, Howells and Stanford spring to mind. Whatever the reason, this new version will certainly fill a void. Written for mixed chorus and strings, MacMillan divides this 13th-century Marian hymn into four sections, traversing Mary’s suffering at the foot of the cross to her role as mediator.

At fifty minutes or so, MacMillan’s Stabat Mater is a sustained exploration of sorrow that has unlocked some of his most powerfully moving and bittersweet writing. From the numbed, almost terrifying, grief evoked by the orchestra in the opening part through to the radiance of the vision of paradise at its close with its eloquent violin solo (courtesy of Thomas Gould), this Stabat Mater is a revelation, one which alternately shocks and soothes.

MacMillan regards his chosen forces as a resource for creating strikingly vivid, sometimes harsh, bi-tonal effects, and is not afraid to challenge players or singers alike. At various points, Julie Cooper scooped a terrific top-C when evoking the pain of Mary’s loss, haunting double bass tremolos added to the anguish, and three tenors created a more personal plea to intercede Mary’s suffering in a passage that echoed Monteverdi.

MacMillan has used many of these instrumental and vocal techniques before, but here they have found a natural habitat and are used to spectacular effect. In the safe hands of these performers, Macmillan must have been delighted with this electrifying premiere of what can be regarded as one of his finest works.