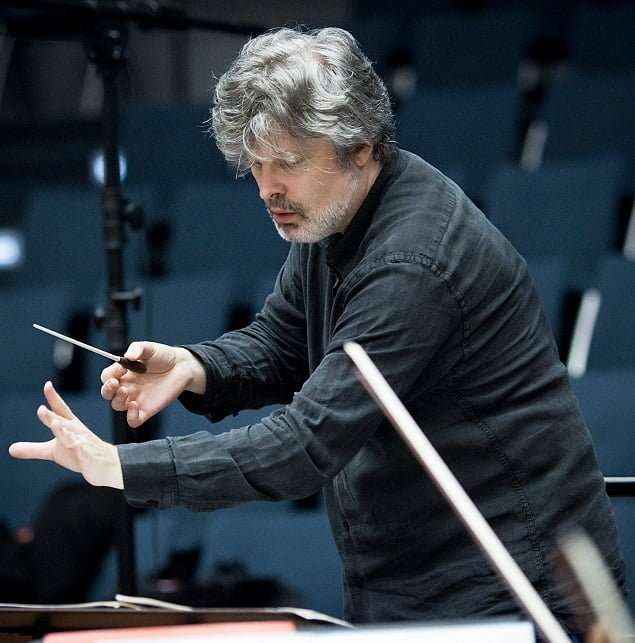 Just over twenty years ago in 1994 a radio broadcast of the Seven Last Words on the Cross made clear that James MacMillan was a major new figure on the British choral scene. Since then he has produced an impressive catalogue of choral works – many of them inspired by the events of Holy Week – and now there are two settings of the Passion story (the St John appeared in 2008). Plans to add Mark and Matthew in the future are also taking shape.

Since its Amsterdam world-premiere in March 2014 (conducted by Markus Stenz) MacMillan’s St Luke Passion has been heard in North Carolina (Duke University) and Birmingham (co-commissioned for the 40th-anniversary of the CBSO Chorus), and here on Easter Sunday it received its London debut, following hard on the heels of the Good Friday broadcast from King’s College Cambridge.

Judging by the audience figures at the Barbican Hall (and particularly those who remained behind afterwards for a discussion of the work) more performances of the St Luke Passion are sure to follow. This one was brought to life by the composer. Supporting a total of 60 or so very accomplished choristers and adults was the Britten Sinfonia – amply fulfilling MacMillan’s remit for an orchestra of eight woodwind-players, pairs of horns and trumpets, timpani, organ and strings. Conspicuously absent from the platform was any vocal soloist.

Discarding a solo Evangelist is not without precedent – last year Gabriel Jackson did much the same in The Passion of our Lord Jesus Christ – and like Jackson, MacMillan distributes the narrative text and words of Peter and Pilate amongst the main chorus. More striking is the composer’s decision to embody Christ’s suffering in the sound of young voices (often divided into three parts) whose innocence and purity would be symbolic of the sacrificial Lamb of God and the Trinity. MacMillan wanted to examine Christ’s “otherness, sanctity and mystery”. Unlike Jackson’s anthology-style Passion text, MacMillan focuses almost entirely on chapters 22 and 23 of St Luke and frames the Gospel narrative with a ‘Prelude’, drawing on the Annunciation, and a ‘Postlude’ that looks beyond the Crucifixion to the Resurrection and Ascension.

He responds to these texts with music that is approachable and largely tonal (clear-cut melodic lines with a directness of expression) yet challenging in some demanding choral-writing and athletic instrumental lines. Sinuous oboes during the Last Supper episode tellingly create a collective memory of Bach, as does MacMillan’s use within the orchestra near the end of the work with the chorale, “O sacred head sore wounded”. Whilst not as overtly theatrical as his St John Passion, the St Luke nonetheless has its moments of drama – menacing brass for Christ’s last hour with the disciples, decibel-breaking timpani anticipating Pilate’s judgement and the violence of the crowd baying for blood.

Particularly moving is MacMillan’s portrayal of Peter’s denial, vividly illuminated by rhythmically sprung choral-writing, bass voices (Peter) and elegiac strings. But this, like many other passages, would have benefited from dynamic restraint, and dramatic tension would have risen if the volume of the Britten Sinfonia Voices had fallen. Occasionally, I longed for a more devotional tone, which would have intensified the rare moments of a cappella eight-part choral writing. If this select ensemble did over-sing then its intonation was flawless and its diction clear.

Equally clear were the young voices of Christ who delivered their triadic text (for the preparation of the Passover) with total confidence, producing a perfectly blended sound when later reducing to a single strand. Thorough coaching enabled them to sail through the tricky imitative writing for the ‘Daughters of Jerusalem’ sequence (Christ’s words on the Cross) and sustain a convincingly held humming tone at the work’s close – an indication, perhaps, of Christ’s continuing presence in the world today.

Despite many admirable moments, the work’s restricted choral palette makes for a long 75 minutes and, regardless of the composer’s personal convictions, I wait to be persuaded by the absence of a soloist.