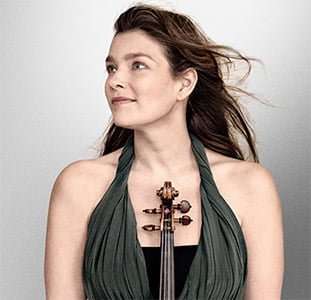 The four concertos featured by Janine Jansen, in this concert gently promoting her recent Bach album for Decca, form the core of Johann Sebastian Bach’s output in this genre. As such they provide a surprisingly wide range of stylistic and interpretive possibilities – explored equally widely by Jansen, and her finely-chosen and disciplined Friends.

The ensemble itself, comprising six violins, two violas and single cello and double bass, supported by a harpsichord, echoes Bach’s own personnel at the court of Cöthen, where most of these works are thought to originate. Not only does this economy make for a rawer sound, in which nuance and detail can be more easily and clearly expressed, but it allows for a more equal interplay between soloist and accompanists.

Right from the crisp opening of BWV1041 it was clear that the players’ performance was perfectly dictated by the expressive needs of the soloist. The texture was firmly woven between soloist and ripieno sections in the first movement, and continued to provide a solid but supportive grounding for the elegant poise and poignant rubato of the second – an expressiveness always justified by the emotional frame surrounding it. Jansen’s attention to detail was evident in the ‘other’ Violin Concerto, BWV1042, with beautifully judged dynamic shaping, mesmerising variations in tone in the gossamer-like, transparent melodic line of the slow movement, and an intensely quixotic, questioning mini-cadenza. However, there were occasional moments of tuning or timing instability.

The Concerto for Two Violins shone with vitality and zest – both violinists, the other being Boris Brovtsyn, delightfully matched in tone and balance, produced real bite when needed, complementing the brisk, upbeat tempos and concise phrasing. Despite this, the wonderful slow movement was certainly no less tender for it. Ramón Ortega Quero’s hugely playful approach to the Oboe Concerto gave the ensemble an opportunity to adapt to a different style of performance. It may have been simply through comparison to Quero’s sprightly, almost impish bounce and joyously cheeky turn of phrase, but the ensemble felt slightly emotionally constrained, with one straitlaced boot still in the camp of respectable behaviour. Quero’s consistently round and warm tone, and endless energy, more than countered this, however.

The final item in the well-judged programme proved the most curious, and possibly least well-known. The attribution of BWV1060 as an Oboe and Violin Concerto is conjecture, and each movement seemed to provide the soloists with a different and contrasting context for their relationship. In the first the instruments seem oddly matched, appearing to compete with each other for dominance – a notable contrast to the supportive equality of the Two-Violin Concerto. The central movement reconciled the soloists, and the ferociously performed finale found them playing as one, rather than egging each other to greater lengths extremes; the rapport between Quero and Jansen blazed joyously. This concert showcased Bach’s music as sensitive, heartfelt and vital, not mechanical and mathematical.