Roky Erickson and The Explosives 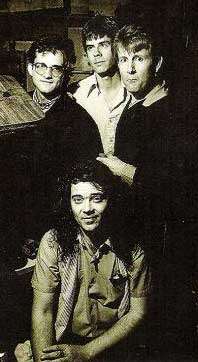 However coincidentally, the reopening of the Royal Festival Hall has been the venue for this year’s Meltdown festival that, as curated by Jarvis Cocker, has offered the most varied and absorbing programme since the one overseen by Scott Walker seven years ago. Not the least of its attractions (and a late addition, judging by its absence from the June brochure) was the first appearance in the UK of Roky Erickson – not a musician of whom anyone so informed would have expected to encounter in live performance.

Erickson’s musical legacy comes in two main phases. The period during 1966-68, when at the helm of the group The Thirteenth Floor Elevators, he created three albums that redefine the term ‘psychedelic punk’; then the decade from the mid-1970s to mid-80s, which saw sporadic comebacks with, first, The Aliens, then The Explosives – playing material whose combination of bluesy hard rock with lyrics poised somewhere between metaphysical and kitsch was galvanised by the dynamism (the original ‘primal scream’) of Erickson’s vocal presence. In between, a lengthy stay at a mental hospital (Erickson having pleaded guilty to drug possession on account of insanity, and undergone electro- convulsive therapy in the process) and, latterly, a decade or more of musical inactivity have stoked the Erickson legend but detracted from his musical achievements. Largely through the efforts of his brother, Sumner, these last five years have witnessed a most unlikely renaissance – in the process turning a situation not unlike that which befell Syd Barrett into one happily more akin to Brian Wilson.

Lasting just over an hour, this RFH set was confirmation that not only is Erickson up for making music, but also that he is capable of making it happen. His rhythm guitar playing looks and sounds to be fully in touch, while that rasp of a voice – by turns commanding and haranguing – has lost none of its edgy intensity. Stage banter was restricted to “thank you” repeated twice (in regular succession) between songs, and a single “It’s great to be here”. But if Erickson’s live appearances now depend on a pre-ordained context for ‘getting through’ (as with Brian Wilson), then those appearances are their own justification and, as his backing band, The Explosives can certainly rock with the best of them.

The set itself was in line with those that Erickson and the band have been working through in the US (and will soon be taking to festivals in Denmark and Finland). This means a regrettable absence of Elevators’ classics (how one would love to hear Erickson tackle such ‘Psych’ classics as ‘Fire Engine’ and ‘Splash One’, not to mention the truly Ivesian ‘May the Circle Remain Unbroken’), but a comprehensive overview of 70s and 80s tracks – including such as ‘Creature With the Atom Brain’ and ‘Don’t Shake Me, Lucifer’, which yield surprising sensitivity behind the fury, and the inimitable ‘Two-Headed Dog (Red Temple Prayer)’ – nowadays more a call to arms than a sing-a-long. Notably tight as an outfit, The Explosives drove the music hard yet avoided becoming relentless through the finesse of their playing – with the added spaciousness of the Festival Hall acoustic proving its worth in an admittedly unlikely context. Less frequently encountered numbers such as the sardonic ‘Bermuda’ and pathos-drenched ‘Starry Eyes’ opened-out the musical range yet without undermining the pace as a whole.

There was time for two encores, ending with a laid-back but menacing take on ‘Night of the Vampire’ which fairly brought the house down (or rather, to the front of the stage). Erickson shook hands and acknowledged the applause with a salute as much of defiance as thanks. But, then, a figure who might not have been expected to be alive, let alone performing, by now had just taken London by storm: the musician whose ‘You’re Gonna Miss Me’ had become emblematic of his career was back and loving it.

Support came courtesy of Clinic – a well-regarded cult-band that has amassed quite a following over its 13 years on the circuit. While top hats and surgical masks are redolent of The Magic Band – circa Lick My Decals Off, Baby – the music is closer to mid-1960s American ‘Psych’ and such later incarnations as The Doctors of Madness. The 40-minute set took time to get going, but tracks such as ‘Corpus Christi’ – with its ringing guitars and careening keyboards – confirmed Clinic as masters of their game. “Funf”, an album of B-sides just released on Domino, ought to be worth checking out.