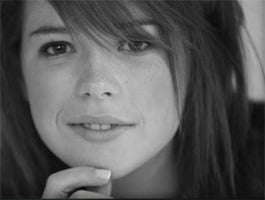 Jessie Buckley, you may remember, was the runner-up in the BBC’s “I’d Do Anything” search for an actress-singer to play Nancy in “Oliver!” at Theatre Royal Drury Lane, London. Jessie is from Killarney in County Kerry, the daughter of a musical family. Her mother is a vocal coach and Jessie has sung from childhood and also learned to play piano, clarinet and harp. She was turned down by two drama schools but by accident saw the advertisement for the television show. Up until she applied for an audition on “I’d Do Anything” she had only appeared in school productions. As runner-up in the television auditions she was offered work in “Oliver!” as understudy and cover at matinees but chose to go her own way and landed the part of Anne Egerman in Trevor Nunn’s recent revival of Sondheim’s “A Little Night Music” at the Menier Chocolate Factory, one of London’s high-profile fringe-theatre venues. The production transferred to the West End for a respectable run and is now on Broadway, although without most of the London cast.

In my own review of “A Little Night Music” in these pages I said: “Jessie Buckley is deliciously dotty as young Anne, although the part seems a bit of a stretch for her vocal ability.” Perhaps the voice at that time wasn’t quite ready for a theatre show, but since then she has gained more experience in acting and singing, although in her cabaret act she eschews musicals per se. Maybe, after trying to get into “Oliver!” and having done “A Little Night Music” in two venues, she may have had enough of musicals. Jessie considers herself as an actress first and foremost, so we may also be able to look forward to some straight dramatic roles in the future.

Meanwhile, Jessie’s London cabaret debut is quite an auspicious occasion, heralding big things for the twenty-year-old chanteuse. Her voice is quite something, powerful and with a definite edge to it and to do two one-hour sets in a single night at her age and with her limited experience, with no fluffs, no wrong entries, and only suffering a little with nervous tension takes some guts and determination.

The programme is almost entirely made up of love-songs as Jessie’s season at Pizza on the Park leads up to Valentine’s Day. Perhaps it was first-night nerves that found her singing an opening medley of Lerner & Loewe’s ‘Almost Like Being in Love’, Bart Howard’s ‘Fly Me to the Moon’ and Rodgers & Hart’s ‘This Can’t be Love’ all at top speed and at the same tempo. I know you have to grab your audience from the word go, but this seems to be a breathless race to sing as many songs as possible in the least time. Anyway, Jessie calms down for the next number, Fain & Webster’s ‘Secret Love’ made famous by Doris Day in “Calamity Jane”, although I didn’t care for the odd emphases on certain words and her not always sticking literally to the tune, although that could be part of the arrangement.

The singer warns us that this is a different Jessie, as she has lately become ‘Jazzy’ Buckley, so we get a smoochy version of Rodgers & Hart’s ‘My Funny Valentine’ before moving into a jazz-fuelled assortment of songs, all standards and introduced with some sort of story attached to them, such as how Jessie got to know Ray Charles’s work (‘Hit the Road, Jack’) through her father’s imitations, or the discovery of her idol Ella Fitzgerald (‘Misty’), her love of New York (‘Lullaby of Birdland’) and a story about Johnny Mercer playing ‘Blues in the Night’ to Judy Garland and Mickey Rooney. At the moment Jessie talks a little too much and her act has little shape, beyond being a roster of great tunes, but these are early days.

Part two of the evening opens with Joe Thompson, resident pianist at The Ivy in Covent Garden, giving a superb solo rendition of Hoagy Carmichael’s ‘Skylark’. Jessie then embarks on another set of superb standard numbers from ‘Stormy Weather’, ‘The Way You Look Tonight’ and ‘They Can’t Take That Away From Me’ to ‘Blue Skies’ and ‘Black Coffee’. This girl certainly has great taste in her choice of music, and she even includes that plangent rarity ‘That’s All’, by Bob Haymes and Alan Brandt, and Ray Charles’s ‘Hallelujah, I just Love Him So’. Paying tribute to another idol, Nina Simone, she essays ‘Love Me or Leave Me’ and then goes into the final stretch with affecting versions of Hoagy Carmichael’s ‘I Get Along Without You Very Well’, Billy Strayhorn’s ‘Take the ‘A’ Train’ and Rodgers & Hart’s ‘Bewitched, Bothered and Bewildered’ before returning for her encore of Harold Arlen and Ira Gershwin’s ‘The Man That Got Away’.

Whether Jessie is singing jazzy or bluesy, her voice is obviously one that is not going to go away. She does, however, still have a lot to learn by way of stage presence, the use of body language, how to converse with her audience without sounding too gauche, but the raw talent is there and she can only get better and better. It would be good too if she could acknowledge the songwriters concerned, a common error in cabaret circles but an important point. Aided immeasurably by her pianist and music director Joe Thompson, whose dazzling piano-playing threatens at times to become the star of the show, and with further accompaniment by a brilliant bass player, Ron Rickenberg, Jessie has everything going for her. She is in safe hands and the only way for her to go is up.