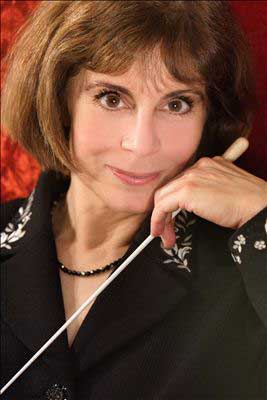 From Interlochen to the World via the Internet, a short concert that opened by marking Ani Kavafian having first played there fifty years ago. The Saint-Saëns – Kavafian’s award-winning piece back then – made an enjoyable entrée. The Introduction was quite dreamy, and attractively so, with some welcome old-world charm from the soloist, and she was also suitably capricious, setting up nicely what follows, quite stately in her attention to rhythms, nicely time-taken though, with affection invested into the lyrical sections; and, throughout, the Interlochen World Youth Orchestra’s response was crisp and committed.

JoAnn Falletta’s view of Tchaikovsky 5 was refreshingly direct, perhaps even brusque at times, and she made no concessions to her young charges – aged between 13 and 17, they and she all wearing the Interlochen flame-red (to my eyes) uniform top – requiring a nimble and sonorous reaction which was delivered with skill and relish. Less morose than it can be, the opening measures avoided mawkishness and displayed some fine and sensitive clarinet-playing, then they all found a confident tread for the Allegro, power and passion moving the music on, the players a little harried at times but staying with Falletta. The slow movement, Andante cantabile, was full of promise and enjoyed a confident horn solo by an unknown young man; and if one wanted greater expanse at times, there was no doubt that was all very alive, fresh and unsullied. The remaining two movements were taken as one – conductors such as Barenboim and Eschenbach have taken all four unbroken – first a waltz that flowed if with flexibility and then the finale – after an incisive (clipped) opening – was certainly an exciting charge leading to a measured yet uplifting coda that worked a treat.

If the Tchaikovsky was a little too driven at times, there is no doubt that Falletta had the players on her side and that they, and Interlochen, can take pride from what was a focussed and dedicated performance, notably well-tuned between the orchestra’s sections. Falletta having left the stage, it remained for the concertmaster to take to the podium. She directed what was described on the webcast as the “Interlochen Theme”, which turned out to be a small portion of Howard Hanson’s Second Symphony (‘Romantic’, 1930), which was also used in the film Alien (seemingly without the composer’s knowledge), and which appears to be a gift from the him and which closes every Interlochen concert.