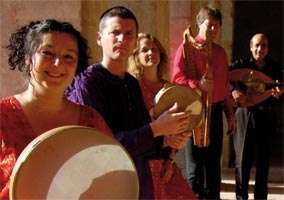 Once again, audiences at Chester Summer Music have been treated to another rare visit from a gifted ensemble. This time it was Joglaresa along with Belinda Sykes for a programme that charted a voyage through lands and times, the inspiration the songs of the Sephardic Jews.

It is now approaching two decades since Joglaresa – described as a British/Israeli/Irish/Arabic band – has played together. The members’ approach to performance is particularly revealing. They could be thought of as, primarily, an early-music ensemble, but they are much more than that. They programme medieval Jewish and Arabic texts and link them to melodies which are historically authentic – as far as this is possible. The problem – if, indeed, it is one – is that it is often possible to trace the provenance of a poem accurately but the music which might have accompanied it was often part of an oral tradition which would be adapted.

And so it was with the Chester programme. Here was a mix of Balkan, Bosnian and Bulgarian Sephardic poems as well as traditional Arabic and Hebrew hymns and poems from North Africa . The programme comprised three layers of song: medieval Judeo-Arabic poetry with medieval melodies; songs by medieval poets which still survive in the oral tradition of today and Judezmo – Judeo-Spanish – ballads. The fact that the performers have backgrounds in traditional English and Irish folksong, as well as Maghrebi, Balkan and Middle Eastern music makes for a totally authentic experience. Add to that the fact that performers spent years in North Africa and the Middle East absorbing the music and learning local languages, then this was bound to be quite an experience.

Belinda Sykes directed the performance. Her extraordinary talent was last heard locally in the premiere of Karl Jenkins’s “Stabat Mater” at Liverpool Cathedral last year. Her exceptional voice complemented those of Mor Karbasi and Jeremy Avis while the ensemble consisted of harp, nay, dulcimer, oud, kemence, guitar and percussion.

The interaction of the performers was intense, though much of it sounded improvised – though clearly it was not. It was a lively, rhythmic performance, sometimes soporific and almost sultry, at others highly excited and urgent. Here was rhythmic vitality, melodic lines where microtones were the norm with many of the piece performed in an almost trance-like state.