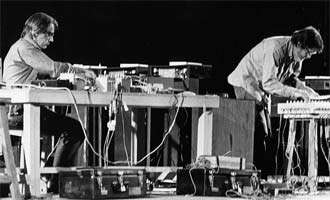 An irony that the prankster in John Cage (1912-92) would have enjoyed is that his most enduring composition is one that involves no music. Sound was music to Cage – uncoupled from conventional notions of pitch and rhythm – and if this substantial concert of his pieces suggested anything, it is that those works that push music far beyond its recognisable boundaries are more interesting than the more conventional ones.

Cage’s works inhabit the area at which music meets art. It’s hard to know whether to call him a composer, an artist or a philosopher and the events surrounding this concert (an exhibition of his artworks at the Hayward Gallery entitled “John Cage – Every Day is a Good Day”, and pre- and post-concert talks) certainly revealed him as a figure unifying many disciplines. Whatever else, though, Cage remains a figure of fascination: a packed Queen Elizabeth Hall and sizeable queue for returns were ample evidence of that.

The ensemble called Apartment House began its concert with that 4’33” (1952), which famously/notoriously sets silence in three movements; but it isn’t as simple as that. Cage’s conceptions tread the fine line between music and what we’ve come to understand as conceptual art, and the seminal 4’33” is the most elegant of concepts. Its division into movements seems at first to be a joke at the expense of the work’s superficial pomposity. But stick with it and from these near five minutes of non-performance spin tangential ideas about the very nature of performance. A solitary pianist, seemingly poised to begin playing, draws out the moment of concentration before what we’d conventionally expect to be the performance. This protracted moment, pregnant with tension, becomes the event itself. And then there’s Cage’s obsession with the ‘music’ of everyday objects and environments. A room containing 1,000 people can never be silent, and Cage was more attuned to this than anyone.

At the other end of the concert, 0’00” (1962) occurred without the audience noticing. Cage’s instructions are precise but oddly vague. At first it was “In a situation provided with maximum amplification, perform a disciplined action”, later expanded to preclude repeat performances of the same “action” and to distance whatever the performer chose to do from conventional ideas of music. In this instance, Apartment House cleared the stage in little more than a minute … the performance was done.

It’s these examples of conceptual concision that prove to be Cage’s most intriguing creations. In Radio Music (1956) eight performers take to the stage, each holding an analogue radio. They tune across the spectrum, finding varying tones of white noise and Cage’s point about the musicality of noise is made. It is familiar and oddly comforting; occasional snatches of music found on a passing radio station are swiftly tuned away from, as though they disturb the purity of the static. The same is true of Child of Tree (1975) for an array of found objects in which the solo percussionist’s table of instruments includes a pine cone, large stick and amplified cactus.

There’s a visual appeal too, with the percussion scores being particularly engaging in the inventiveness of the instrumentation. Those reliant on graphic notation, though, felt something of a trial here. The Concert for piano and orchestra (1957-8) and Fontana Mix (1958) were amalgamated in performance at the suggestion of the composer and while Cage’s point about the disparity of the musical material echoing the disconnectedness of street sounds was clear, it felt distinctly un-nourishing. It shared a problem with the similarly scored Music for Eight (1984-7), which although it uses relatively conventional musical notation, the impression was of music much more rewarding to play than to listen to. Only Cage’s String Quartet (1949-50) surprised amongst these instrumental works, with its genial tone and four-season theme – not what was expected from Cage-the-experimenter.