A busy eightieth-birthday year for Cleo Laine and John Dankworth has seen concerts at Cadogan Hall and Royal Albert Hall, as well as at LSO St Luke’s as a run-up to the present evening in the Barbican Hall. 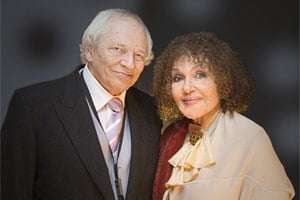 A lengthy and varied programme gave full rein to their many talents, opening with “Decline and Fall of a Bridge” – what amounts to an orchestral fantasia on “London Bridge is fallingdown” that amply demonstrated Dankworth’s orchestral prowess. A concert such as this is also the ideal forum to demonstrate his skills as an arranger: the suave elegance of Ray Noble’s “The Very Thought of You”, teaming activity of the Tizol/Ellington mini- epic “Caravan”, and the languorous warmth of Cole Porter’s “Every Time We Say Goodbye”. In each case, the members of the John Dankworth Quintet meshed perfectly with the London Symphony Orchestra.

Cleo Laine then gave two contrasted numbers from “Shakespeare Settings” (the classic 1964 Dankworth album that is to be reissued later this year). Thus a pert take on ‘It Was a Lover and his Lass’ was followed by the soulful rendering of ‘Shall I Compare Thee to a Summer’s Day’, both sung with that blend of style and sensitivity that has long been a Laine hallmark. Nor was her account of Mandel’s “The Shadow of Your Smile” less than spellbinding in its lyrical rapture. The first half closed with the song-cycle “The Blues Ain’t”, that caused a stir at last year’s Proms – a breviary of jazz-singing that opened with the moody ‘Colour Your Dreams’, continued with the breezy ‘Madame Jazz’, the racy ‘Dreams of Brazil’ (percussion inevitably to the fore) and the wistful ‘Wishing-we-could-get-together-Blues’ and ending with the nonchalant ‘Let’s Forget the Word Goodbye’. Quite a showcase for Laine’s vocals, and quite as much of one to bring it off.

As Dankworth announced, the concert was designed as an equal partnership between the jazz musicians and the LSO – ample confirmation of which came when the Orchestra’s leader Carmine Lauri did the honours in Dankworth’s bittersweet “Afterglow”. Living up to his long-time reputation as a “retiring” (Dankworth’s own description!) artist, the trumpeter Kenny Wheeler then joined-in for a trilogy of numbers taking in Dankworth’s ‘Sailor’ (from “The Million Dollar Collection”), then his own “Just an Old Ballad” and ‘Don the Dreamer’ (taken from “Windmill Tilter”). In each of these, the voice-like liquidity of his tone came through in abundance.

Finally the world premiere of “World Jazz Suite #2” in its symphonic version. This half-hour work affirmed Dankworth’s continuing determination to take the fusion of jazz-ensemble and orchestra in new and fruitful directions. After the purposeful motion of ‘Prologue’, it continued with the tail-chasing jinx of ‘Fugue’ and characterful vignettes of ‘Garland Time’, before the subtle rhythmic interplay of ‘Haul Away’ and effective rhythmic punning of ‘Offbeat’. After the generous lyricism of ‘How Goes the World’, ‘Harvey’s Festival’ unfolded as a breezy interlocking sequence of solo turns, before ‘Epilogue’ returned the opening music and thus brought the work to a deftly understated close. The overall suite could perhaps have made even more of its interplay between jazz and classical media, but with signal contributions from violinist Christian Garrick and tenor saxophonist Tony Coe (both of whom also graced the first-half arrangements) and the ever-attentive direction of Laurie Holloway, it is undoubtedly a substantial and diverting listen.

Time to draw the evening to a close: Cleo Laine singing her ‘take’ of Stanley Myers’s “Cavatina” – as featured in “The Deer Hunter” and well-known through guitarist John Williams’s version of it – with an emotional warmth as to reduce those half her age to tears, followed by a rendition of Billy Strayhorn’s standard “Take the ‘A’ Train” that drew everyone into the fray and which opened-out into a virtual sing-along. A night to remember – and not least as a testament to the enduring musicianship of this unique couple.