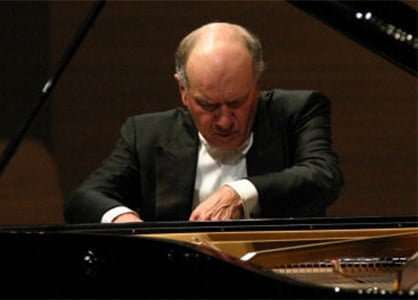 Although he has among the widest repertoire of any present-day pianist, Beethoven has always been central to John Lill’s music-making such that a cycle of the piano sonatas was the obvious, if hardly the easiest project to undertake during his seventieth year. The present London cycle (one in Manchester is already well advanced) is conceived in eight concerts of (mainly) four works apiece, with each of these programmes taking a chronological path through the chosen sequence. In view of the preponderance of ‘early’, as opposed to ‘middle’ and ‘late’ sonatas, this is a highly feasible basis on which to proceed – and while this series will close with the final such work, Opus 111, this opening London recital assuredly did not begin with the first.

That honour was allotted to the third of the Opus 10 triptych (1797) and a work which represents both the epitome of the late-Classical style and of Beethoven’s interventionist zeal. Lill (rightly) made no attempt to regularise its formal imbalance, with an opening Presto that fairly crackled with energy – not least in a scabrous development – then a slow movement that emphasised the tendency to fragment texturally as it intensified emotionally in music whose pathos is achieved without affectation. The Minuet duly emerged among its composer’s most sanguine, while the finale followed on directly to confirm that humour of the quizzical variety is among the young Beethoven’s most vaunted assets.

Heading to the B flat Sonata (1800) might have risked aesthetic sameness, but Lill underlined the work’s opting for formal unity over expressive diversity. The initial Allegro was bracing in its resolve, its initially bumptious development opening onto an anticipatory transition to the reprise whose often-debated proportion was hardly an issue here, while the Adagio was rendered straightforwardly yet by no means unimaginatively – witness the ominous mood evident when the accompaniment migrates to the bass at its midpoint. The Minuet glided deftly between the equable and the agitated, while the nominally restrained last movement had only an animated central episode to ruffle its essential understatement.

After the interval, a coupling of middle-period works such as the composer might earlier have harnessed as a provocative brace. Easy to overlook given those either side, Opus 54 (1804) is a marvel of formal and expressive one-upmanship – whether in the opening movement with its alternation between laconic thoughtfulness and syncopated belligerence, the two affectionately reconciled at the close, and especially in the concluding Allegretto with its odyssey through the circle of fifths in a perpetuum mobile which ultimately almost ran away with itself via a surge of momentum that was consummately brought off. This remains a hidden gem of a work, here with a performance to match.

The ‘Appassionata’ (1805) could hardly be called neglected, but has equally suffered its share of Romanticised misrepresentation. There was none of that about Lill’s rendering, even if the present account was not quite the equal of the riveting one he gave at the Royal Festival Hall as part of his sixtieth-birthday recital. The opening Allegro began persuasively in a mood of uncertainty tinged with foreboding, though the development was just a little stolid in manner and, after an ideally intensified reprise, the coda verged on the matter-of-fact. The central Andante then began a shade too loudly, so robbing the theme of its essential intimacy, yet how artlessly Lill conveyed the textural flowering of the variations as the music takes flight before it touches on a modulating pause that sets off the finale: one whose moto perpetuo underpinning here affords anxiety rather than diversion, as it unfolded with an impulsiveness that spilled over into the coda in which Beethoven fairly seizes the music by its throat on the way to the stabbing final chords.

A laudable conclusion, then, to a recital that launched the cycle in impressive fashion. Lill’s programme note spoke of his dislike for the term “interpretation” as implying wilful intervention in the work at hand. No-one could accuse these performances of diluting or obfuscating the essence of Beethoven’s music though, for no other pianist gets to its essence like John Lill.