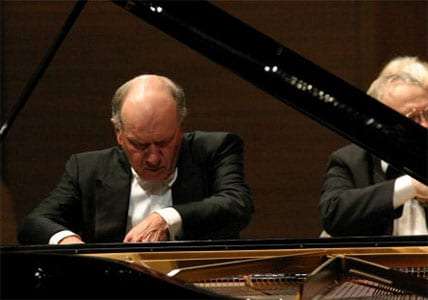 Once through the BBC Radio 3 intro – fine for the airwaves, something of an intrusion in the Hall – and someone’s ringing mobile scourging what should be pre-music silence, it seemed rather uncharitable to begin John Lill’s 70th-birthday concert with Brahms’s Tragic Overture. But titular concerns aside, it is a masterpiece. Thomas Dausgaard and the Royal Philharmonic Orchestra gave it a rigorous outing. Interesting to find Dausgaard so adaptable to forces larger than his much-recorded Swedish Chamber Orchestra, for he relished the fuller tones and did not impose any ‘reduced’ or ‘period’ tendencies. This was a refulgent and trenchant reading, with measured, stuck-to and integrated tempos, but without denying a coursing vitality that impressed and an emotional identification that thrilled, the RPO’s playing honed and focussed in response to Dausgaard’s dynamic conducting.

John Lill himself, having attained three-score years and ten on this very day, then essayed one of his signature pieces with Biblical assurance. Indeed Rachmaninov’s mighty, epic and demanding Third Piano Concerto helped put Lill on the musical map when he was just 18 playing the work at the Royal College of Music with Sir Adrian Boult conducting. 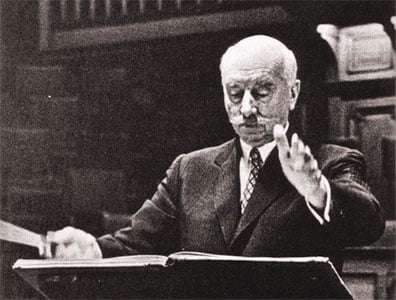 Perfectly paced from the off, and on his name-day, Lill gave a searching and accredited account of the piece, his honest musicianship and selfless virtuosity giving the music a depth of utterance that isn’t guaranteed from a pianist who is more of a fortissimo flash-harry. Lill’s seriousness of intent – not that he didn’t also ignite the keyboard or cultivate suave and inward phrasing – was given with a completeness that both illuminated and fulfilled. Admirably complemented by a vibrant accompaniment, Lill’s noble and tender traversal never mistook sentimentality for sentiment, for overall structure was part of the bigger picture, and although he opted for the longer and more-complex of the two first-movement cadenzas, he did so without drawing attention to it and making it part of the whole. If, occasionally, one might have wished for a little more colour from the piano, and would have preferred the woodwinds to have been more strongly projected in the finale, here losing out to the fine-sounding Steinway, there was much that was heroic and soulful to this performance, with waves of romance, Lill the consummate artist on behalf of Rachmaninov’s score as a special event in the pianist’s calendar. Following his recent London cycle of Beethoven’s 32 Piano Sonatas, it was good to hear John Lill in another of his favourite composers.

To close this celebration concert, Dvořák’s outgoing and exuberant Eighth Symphony, full of the flora and fauna, and the song and dance of his native Bohemia, rather like a Slavonic Dance on stilts. 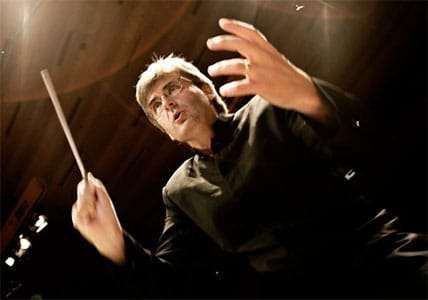 Dausgaard worked wonders here, and had the RPO fully responsive to him (even if the trumpets and trombones were a little dominant at times). This was a gloriously fiery and spontaneous account, lovingly turned and with detail touched in with affection, Dausgaard’s from-memory, lean-back, lean-to and close-encounters with the front desks of strings conducting style (he had almost dismantled one of the galaxy of BBC microphones during the Brahms!) gaining a positive, fresh and enjoyed orchestral response. Not all fireworks though, for the slow movement was deeply poignant and wonderfully hushed, and there was a delicious lilt to the terpsichorean third. Solos from leader Duncan Riddell and clarinettist William Stafford will stay in the memory, as will Dausgaard’s contrasts with the final pages, touching reflection followed by a foot-stomping, guns-blazing coda.