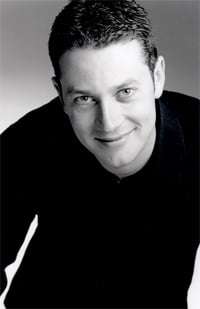 This uplifting concert (part of a UK tour) of music by the two great musical theatre partnerships of Richard Rodgers, working first with Lorenz Hart and then with Oscar Hammerstein II, reached the giddiest heights of accomplishment and flair. While the songs themselves have never left us, the sumptuous arrangements in which they were attired for their Hollywood incarnations have only survived till now on magnetic strips down the edges of roadshow celluloid. Only with the advent of the John Wilson Orchestra are we now discovering, in the immediacy of live performance, the musical craftsmanship of Conrad Salinger, Edward B. Powell and their golden-age colleagues.

The order listed on this page bears little relation to that printed in the programme, but then again the latter bore little relation to what we heard, notwithstanding an asking price of £7.00 for a twenty-four-page glossy booklet. No, the concert was a pick-and-mix affair and all the better for it. Wilson ditched one promised song (‘I Cain’t Say No’ fom Oklahoma!) in favour of two untrailed Rodgers & Hart numbers, ‘The Most Beautiful Girl in the World’ and their final collaboration, the darkly comic ‘To Keep My Love Alive’. This last song, for which no arranger is credited, is one that never made it to Hollywood, for it was among six new numbers that the fast-flaking partnership added in 1943 to their earlier collaboration A Connecticut Yankee, a show that was shorn of its score for contractual reasons when the movie version came to be made.

The American belter Kim Criswell is a phenomenon who gets better and better as years go by. She’s Bette Midler on the outside, Barbra Streisand on the inside, and she sang the hell out of Rodgers & Hart, bringing sassy swing to ‘The Lady Is A Tramp’ and gin-with-a-twist-of-lime to ‘I Wish I Were In Love Again’, the sardonic duet she shared with an equally charismatic Julian Ovenden. Only in the aforementioned ‘To Keep My Love Alive’ – a riotious litany of husband-dispatchings worthy of Chicago – might one have wished for a drier, more deadpan delivery.

Ovenden is a major talent who caused a stir as the leading man in the Michel Legrand-penned Marguerite, but who has struggled since to find a vehicle worthy of his formidable talents. He joins this tour direct from playing J. M. Barrie in a new musical at the Curve in Leicester, Finding Neverland; it remains to be seen whether that’s the show to do the trick for him. Meanwhile, John Wilson brought out the best in this gifted singer with a cavalcade of leading-man numbers, all of which suited his uniquely husky yet full-throated timbre. From ‘Oh, What a Beautiful Mornin’’ to ‘If I Loved You’ by way of ‘Younger Than Springtime’, Ovenden delivered the goods at every turn.

Annalene Beechey has a bright showbiz soprano whose stratospheric top range is like the secret compartment in an attaché case: above the break her voice springs open to reveal unexpected delights. Beechey’s duets with Ovenden recalled Shirley Jones in the movie versions of Oklahoma! and Carousel, and she yielded nothing to Julie Andrews in in her fresh, characterful rendition of ‘I Have Confidence’ – a number Rodgers wrote after Hammerstein’s death, to his own stylish lyric, especially for the film version of The Sound of Music. As for Thomas Allen, in his early appearances the distinguished baritone took on songs whose long, stentorian demands did not flatter the current condition of his voice; but then, with ‘Some Enchanted Evening’, everything changed and he located the music’s fire and fervour, caressing every syllable of Hammerstein’s impassioned lyric. Amplification of the singers against the 95-piece orchestra was well-balanced and unobtrusive.

From first to last, though, it was the orchestra’s show. John Wilson and his ensemble cut a swathe through the arrangements with bracing accord and scintillating virtuosity, the strings in particular recreating the unmistakable sweetness of the great Hollywood players. Energy levels never dipped, even when it might have been better if they had. (Any merry-go-round that spun at the speed of this particular ‘Carousel Waltz’ would be fielding complaints from its battered punters, even though it was quite a ride.)

The maestro was a genial, unobtrusive host who took the microphone only occasionally – either to point out some aspect of the music or, more often, to plug his latest CD. He made little effort to conceal the fact that the prime purpose of this Autumn tour is to milk the cash cow, but good luck to him: he did the job with self-deprecating humour and massive musical accomplishment. If this was John Wilson on the stump, he got my vote.