Jonathan Harvey
Wagner Dream – Opera in one act to a libretto by Jean-Claude Carrière [performed in German and Pali, with English surtitles] 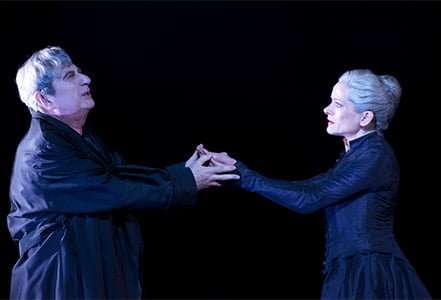 To have this staged production of Wagner Dream, the late Jonathan Harvey’s third and final opera, so soon after its UK concert premiere is an unexpected pleasure, and for Welsh National Opera to have taken on the task as well as taking it on tour is no less admirable. Conceptually this brings together several of the composer’s abiding concerns – not least the worlds of the imagination and the spirit, with the overall undertaking unified by its extensive electronic component. The opera finds the eponymous composer near the point of death and contemplating the sketch for his Buddhist-inspired opera Die Sieger (The Victors) which was conceived in the mid-1850s and had long been intended as his final project – albeit one Wagner, in pushing the project ever further away from his present, surely cannot have expected to complete.

A project, then, to which Harvey would seem to have been ideally attuned, and the opera undoubtedly has many musical felicities. What really made the difference between this and the Barbican Centre account, however, was twofold. First, WNO’s artistic director David Pountney has opted (after consultations with Harvey prior to his death) to stage the opera with its libretto in German for the spoken parts and Pali (a language associated with the earliest Buddhist texts) for the sung roles – thereby clarifying the deepening interpenetration of the human and spiritual domains, as well as making explicit the key dramatic focus of Wagner as he is forced to confront his inhibitions and ultimately experiences his life in claritas. It also had the not inconsiderable benefit of diverting one’s attention away from the passing banalities of Jean-Claude Carrière’s libretto: sometimes, it seems, operas are best heard in a language which is other than that of the audience’s native tongue! 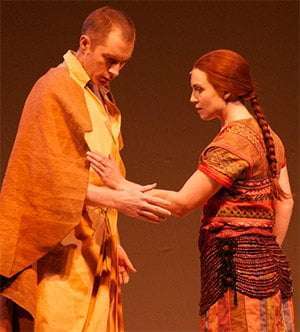 The other great advantage is Pierre Audi’s staging – originally seen in Luxembourg, Amsterdam and Paris in 2007 and expertly revived by Miranda Lakerveld – whose abstract conception was assuredly enhanced by Jean Kalman’s luminous backdrops and surprisingly subtle usage of fluorescent lighting, along with Robby Duiveman’s stylish costumes which extended to the smocks-and-caps uniforms of the musicians half-visible in a central dugout near the centre of the stage. It certainly helped to sustain the atmosphere of the drama as it unfolds on that fateful night in Venice – with the figures around Wagner being spoken and the Buddhist figures who act out the story of Prakriti being sung. Perhaps the former still lacked a final degree of substance – Wagner and Cosima, in particular, struggling to rise above the clichéd personas accorded them by posterity, with those of singer Carrie Pringle, the earnest Dr Keppler and conscientious housekeeper Betty only just emerging as more than ciphers; though the actors themselves did their utmost with the material.

The sung parts, invariably well taken, were dominated by Claire Booth’s spirited and increasingly combative Prakriti as well as David Stout’s poised and affecting Buddha. Robin Tritschler was a strong though never hectoring Ananda, while Rebecca De Pont Davies was a warmly consoling Mother and Richard Angas provided a lively cameo as the jaundiced Old Brahmin. In a drama where the majority of the action is being played out within the mind’s eye, it mattered little whether the resulting drama was essentially static or stylised for this, in itself, tended to place more attention on what was being spoken or sung. Suffice to say the protagonists involved were unfailingly sensitive to the roles. 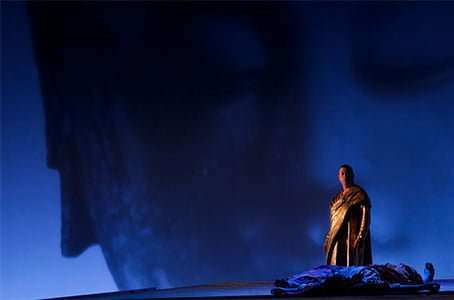 Technically, too, the production was a great success – not surprising given the combined expertise of Gilbert Nouno and Franck Rossi in ensuring that this culmination of Harvey’s involvement with IRCAM made a striking impression, and while the electronic component breaks relatively little new ground, it features some of Harvey’s most rarefied and sensuous work in the medium. Among the most versatile of younger conductors, Nicholas Collon directed with audible enthusiasm a work that might easily have lost momentum or foundered on its intense self-communing, and the orchestra played with alacrity.

The opera’s highlight remains the ‘Death Interlude’ in which the ailing Wagner is brought face to face with the impassive Buddha – during which the music comes evocatively and affectingly into its own. That the former should then have rejected the latter’s entreaties to self-knowledge is hardly an issue: that he does so through choosing the example of Siegfried, rather than of Parsifal, as a template for his own unfulfilled quest still suggests a measure either of revisionism or ignorance which, if the latter, seems the more extraordinary given Harvey’s undoubted immersion in his subject. What is no longer in doubt, however, is the overall cohesion and cumulative dramatic power of the work as it was presented on this occasion.