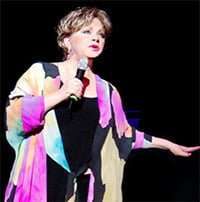 Performing at the elegant Crazy Coqs cabaret room is an artiste who could be considered the archetypal entertainer, a lady who ably fills the traditional role of a singer of standards, or songs which should be, with a jazz-tinged piano and bass accompaniment and some intimate repartee. Her name is Joyce Breach. Her material is well served by her gently melodic voice and engaging style. She was a great friend and admirer of Richard Rodney Bennett, who died three months ago, and her current choice of material is mainly of songs that he admired as much as she and includes a generous share of Irving Berlin and Burton Lane, along with newer numbers by Johnny Mandel and Bennett himself.

Born in Pennsylvania, Breach studied journalism at college, but from the time she graduated she was singing for a living. She spent over thirty years performing in Pittsburgh before moving to New York, where she established herself as an ace interpreter of great songs and with a particular regard for lyrics, and so following in the steps of Mabel Mercer and Sylvia Syms. Breach begins with two Berlin staples, ‘Isn’t this a lovely day?’ and ‘They say it’s wonderful’, the latter given a lyrical tenderness before she performs the first of the lesser-known songs, ‘Easy come, easy go’ by Johnny Green and Edward Heyman, their biggest hit being ‘Body and Soul’. Berlin’s ‘Love, you didn’t do right by me’, written for Rosemary Clooney to sing in the film White Christmas, precedes the charming ballad by Anthony Newley (whom Breach admired greatly) and Leslie Bricusse, ‘Look at that face’.

She lovingly interprets two splendid but neglected songs by Burton Lane and Frank Loesser, ‘Moments like this’ and ‘Dancing on a dime’, the latter the title song from a forgotten screen musical in which it was introduced by Peter Lind Hayes (1915-98), an American vaudeville entertainer, songwriter and actor. Usually given a fairly chirpy rendition, it is taken at a languorous tempo by Breach, who has great affection for it. Richard Rodney Bennett is represented twice, ‘I’ll always leave the door a little open’ (with Franklin Underwood and Johnny Mandel) and ‘Early to bed’ (with Underwood), the latter written for Blossom Dearie. The haunting ‘Not exactly Paris’, by Russell George and Michael Leonard, is a cabaret favourite to which Breach does full justice, and she also finds room for the Gershwins and Cole Porter.

Throughout she is given sterling backing. Graham Harvey is new to her, but his imaginative solos add to the pleasure. The trio really swung at the climax of the title song from a flop musical with songs by Jack Lawrence and Stan Freeman, ‘I had a ball’, and Breach does the same throughout.