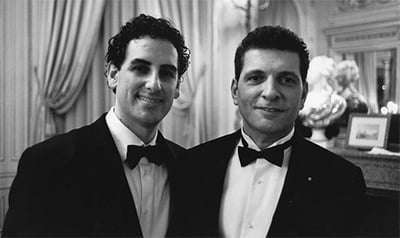 The high-point of Peruvian tenor Juan Diego Flórez’s residency at the Barbican Centre was reached before a packed house. Generosity was the order of the day, with a banquet of varied courses to satisfy the most demanding of diners.

A recital with piano accompaniment is generally reckoned to be a more gruelling assignment than an opera. You are on your own, without make-up, costume or scenery to hide behind, with no colleagues to share the vocal burden and with stamina at a premium. It is bad enough if the material is Art Song but when the repertoire includes a substantial ration of operatic arias the singer, particularly if he is a tenor, must wonder whether it is worth putting himself through the ordeal. In the case of Juan Diego Flórez, one of the operatic superstars of the moment, he also comes burdened with the expectations implicit in that title.

London first heard Flórez in recital, also accompanied by Vincenzo Scalera, in 2001 in one of the early Rosenblatt Recitals. He seemed to be the acknowledged leader of the then nascent resurrection of the ‘Rossini tenor’, epitomised by the aria (not by that composer) from La fille du Régiment (I hardly need to say which). It was once considered impossible but is currently undertaken by dozens of lyric tenors.

Now, at 40, Flórez retains the matinee-idol good looks of earlier years. The voice is still fresh, its upper range as thrilling as ever as he expands his repertoire, most recently with the adoption of the fearsome role of Arnold in (Rossini’s) Guillaume Tell. He flirted with a move into the heavier tenor Fach five years ago when trying out the Duke in Rigoletto, first in Lima, then in Dresden, but seems to have drawn back from a full career change, with La Donna del Lago imminent at Covent Garden, with Tell to follow at the Rossini Festival, Pesaro in midsummer and La fille du Régiment at Vienna’s Staatsoper his next three operatic engagements.

Meanwhile he certainly does not fight shy of concert work. He took some time to warm up on this occasion. Beginning with three of Donaudy’s faux arie antiche, a combination of the acoustic of the Barbican Hall and the singer’s initial nervousness seemed to rob his tone of some focus. ‘O del mioamato ben’ has some hidden traps to contend with and was a risky choice to open the evening. The soft effects with which Flórez chose to introduce himself and to run the voice in did not always obey his commands. His attack on some high entries was uncertain. By the last song in the group, the sound had cleared and the phrasing was confident. Timely enough, as the challenge of Handel loomed into view in the form of Jupiter’s contrasted arias from Semele, sung in impeccable English. The da capo of ‘Where’er you walk’ was beautifully decorated, the final cadenza as imaginative as I have heard. In the fast aria you could see the singer bracing himself for the runs but Handel’s demand for virtuosity were entirely fulfilled. Similarly, Scalera’s right hand, not the only time, was tested for speed and agility and passed its test triumphantly. There was something thoroughly reassuring in the relationship between singer and pianist; their exchanges of solicitous glances proclaimed enjoyment and unity of musical purpose.

Linguistically Flórez seemed equally at home in French. Raoul’s recitative and aria from Les Huguenots was given in full. If he did not entirely master the long-breathed phrasing of the air (some soft endings tended to vanish) the high tessitura played to his strength. The succeeding scena from Jérusalem showed how much greater a composer Verdi was than Meyerbeer. In comparison with the conventional, eminently forgettable utterances given to Raoul, Gaston’s recitative bristles with frustration and misery, setting the scene for the French version of the aria. Two top Cs are prescribed in the final bars: Flórez resisted the temptation to belt out the second, preferring a contained version born of French restraint.

The second half began with a Tosti group. Only two items from the programme heard in the 2001 recital reappeared on this occasion. The most interesting was Ideale. In the intervening years the singer has learnt how to make much more of this song. Torna, caroideale begun ppp but rapidly swelling into a fortissimo at “E me risplendera” before the merest thread of tone was used to support the upper octave repetition of the final “torna” were evidence of how far both the singer’s vocal control and his imagination have developed. Similar contrasts were exploited in Vorrei morire. With Parted Flórez clearly wanted to take us back to the Victorian drawing room. The English words by Fred Weatherly are unspeakably banal; the music drenched in sentiment. Flórez was seemingly at pains to treat the song, a ripe subject for lampooning, with sincerity. Arguably he went too far in that direction. It was a pity that its musically superior companion pieces from the Quattro canzoni d’Amaranta, to texts by Gabriele D’Annunzio, were not chosen instead.

It was a pleasure to hear three pieces from the zarzuela repertoire, even if they were, as with the Tosti selection, popular favourites. Juan’s ‘romanza’ from Luna’s La picara molinera was performed in just the right style. The hero’s obsession with the girl who has rejected him is a familiar theme. Both artists appreciated the flexible style required, with bursts of slancio allied to more wistful passages. The familiar ‘Te quiero morena’ allowed Flórez to fire off some vocal missiles into the stratosphere. It is difficult to put performances by the great Spanish-speaking tenors of the past out of mind when assessing their contemporary counterparts. In the case of Gustavo’s apostrophe to the flower in Los Gavilanes, the recording by Tino Folgar, packed as it is with so many of the tricks of the leggier tenor’s armoury, inevitably makes the modern singer’s performances seem plain.

To end the official programme Flórez, whose previous Donizetti and Bellini roles have been of the soft variety, laid claim to the dramatic bel canto repertoire. His storming performance of Essex’s final aria from Roberto Devereux was to the manner born. There were four encores, Flotow’s M’appari with unwritten ending; the aria from La fille du Régiment, in which his attack on the top Cs is still the cleanest of all contemporary exponents of the part, the final section of Count Alamaviva’s ‘Cessa di più resistere’ and Romeo’s ‘Ah! lève-toi, soleil’, which might suggest another direction in which Flórez’s career might develop.