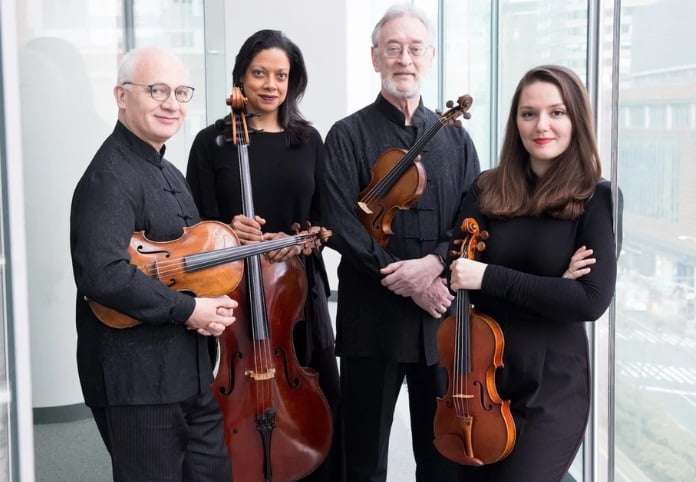 The spirit of Beethoven hung over this recital, the first evening engagement played in Britain by the new line-up of the Juilliard String Quartet – there had been given a BBC lunchtime concert the previous day, also Wigmore Hall. Of the players who were in the ensemble the last time I saw them ‘live’, only veteran Ronald Copes remains: he has been in place since 1997. Leader Areta Zhulla joined at the start of this season, vastly experienced British violist Roger Tapping in 2013 and cellist Astrid Schween in 2016. For the first time, an entity which for decades was solidly male is now split evenly between the sexes. Thus a group founded in 1946 continues to evolve.Although a new release of Mario Davidovsky’s Fragments, Beethoven’s Opus 95 and Bartók’s First Quartet is due from Sony, the most recent issues have been big boxes of the Juilliard’s records for the Epic and RCA labels, giving us the chance to re-evaluate famous performances from the height of Robert Mann’s long leadership. The three works on this programme were all Juilliard staples.

Every time I hear one of Beethoven’s (six) Opus 18 Quartets on its own, I find myself reflecting how interesting it is – many commentators have pointed out that if he had died after the publication of this set, he would still have been considered a significant composer. The one numbered 3, in D, is the first of the set and already one can hear and see how equal the part-writing is, with important solos for the viola and, to a lesser extent, the second violin. Under Mann, the approach to Beethoven was cleanly American, objective and forensic, sometimes verging on pedantry. From the first notes, the new line-up sounded much more like a European ensemble – and much more fun. The various quick-fire conversational exchanges in the opening Allegro were not always defined down to the last semiquaver, as with Mann, but they sparkled more. The Andante con moto began at a pretty well ideal tempo and the players leaned into their phrases with palpable enjoyment. The unusual third movement – neither a Minuet nor a Scherzo – was delightful and the Presto Finale zipped along, right up to a beautifully achieved humorous ending which brought some audible sighs of appreciation from the audience.

The founder members of the Juilliard Quartet began playing the Bartók cycle in 1948 and were the first to record it. They brought immense intellectual rigour to the task. The Third Quartet, which opened the group’s very first concert on 11 October 1946, can be seen as Beethovenian in its intense concentration and concision; and by this point in history there is no question about the absolute equality of the four players’ roles. The interesting thing about the current Juilliard formation’s interpretation was that the piece, once considered a horrendous challenge, seemed like any other central repertoire work. The playing was excellent, if not quite on the level of a performance I once heard from the Eder Quartet, and the overall timing was consistent with Bartók’s requirements, coming in at something like fifteen-and-a-half minutes; but there was much more of a spirit of inquiry than I would have expected from the old Juilliard. There were even a couple of moments when I wondered if someone was going to make a mistake. Bartók makes a lot of demands on the players’ left-hand and right-hand techniques and the difficulties were all surmounted, but the performance was a collaboration rather than a high-tensile demonstration.

Dvořák’s C-major was recorded by the Juilliard in 1959 and their account from the 1965 Salzburg Festival is available on Orfeo. It was a typical Juilliard move to make this work their representative Dvořák piece, as it is the least often played among the composer’s mature Quartets. I was unconvinced by those 1959 and 1965 renditions as they seemed slightly stiff and exotic, not really in sympathy with the more homely aspects of Dvořák’s style. Any fears I might have had were immediately allayed by this Zhulla-led reading. All evening the leader looked comfortable in her role, a half-smile playing around her lips, and she drew a warm, lyrical response from her colleagues, typified by Tapping’s first viola solo. If you were hearing this playing in isolation, on the radio perhaps, I suspect you might attribute it to a central European ensemble. The C-major is generally considered the most Beethovenian of Dvořák’s Quartets, though with the odd touch of Schubert, yet it is couched in the composer’s most appealing style. His own favourite, the viola, has its opportunities but the part-writing is very democratic. Many of us grew up with the Novák Quartet’s 1960 Supraphon LP, which located the work solidly in Bohemia despite its giveaway signs of Dvořák’s Classical studies. This Juilliard performance was full of smiles, rhythmically alive and much appreciated by the audience. No encore was given, indeed the musicians, in the middle of a busy international tour, looked quite tired at the end.

Trivia corner: I do not think I have before ever attended a string-quartet recital in which four piano stools were used by the players. The Wigmore management must have ransacked the building to fulfil this requirement.